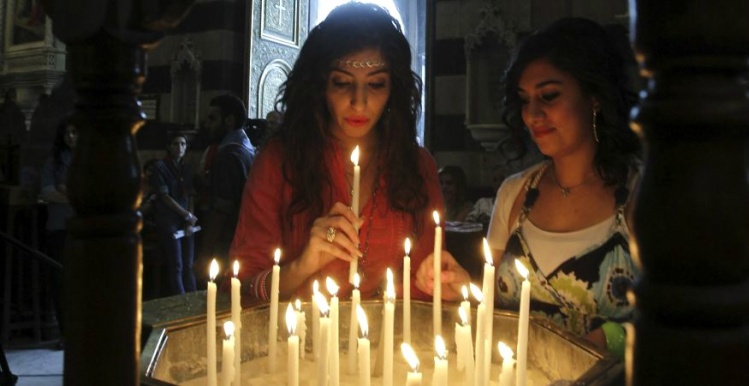 Iraq, Libya, Syria—countries ripped apart by sectarian and political violence in the aftermath of foreign interventions: American invasion and occupation in Iraq, NATO intervention in Libya, and an international proxy war in Syria. It is now commonplace to observe that violence and conflict are endemic to the region. We say, “they’ve always hated each other.” But it was not always so —in prewar Syria,  I found a place of beauty, peace, and coexistence that most Westerners either never knew of or have already forgotten. But the Syrians themselves will never forget.

I served in the Marine Corps during the first years of the Iraq War and was a 9/11 first responder while stationed at Headquarters Battalion Quantico in Virginia from 2000 to 2004. When the War on Terror began, I thought I knew something about Iraq. Along with many of my fellow soldiers and fellow citizens, I believed that Arab culture, with its tribal and sectarian divisions, must be brought to heel by the West: “the Arab world” would have to adopt the distinctively Western values of pluralism, secularism, and equality if peace and stability were ever to have a chance. This was a guiding assumption among the many Marine officers, active and retired, with whom I talked during my years at Quantico. Iraqis and Middle Easterners in general were, for us, abstractions; they fit neatly into categories we had picked up from a college course or perhaps a C-Span lecture: there are Sunnis, Shia, some dissident sects; they all mistrust each other; and they all want theocratic states with their group in charge.

Starting in 2004, just after I had completed my active-duty service and while I was still on the reserve list, I made several trips to Syria in order to study Arabic. These trips ended up undoing every assumption I had made about the culture, politics, and conflicts of the Middle East.

The surprises began as soon as I arrived in Damascus. I had expected to find a city full of veiled women, mosques on every street corner, religious police looking over shoulders, rabid anti-American sentiment preached to angry crowds, persecuted Christians and crumbling hidden churches, prudish separation of the sexes, and so on. I quickly discovered how little Syria conformed to my ideas about “the Arab world,” which were probably more reflective of Saudi Arabian life and culture.

Instead of burkas and niqabs, I saw mostly unveiled women wearing European fashions and sporting bright makeup — many of them wearing blue jeans and tight-fitting clothes that would be commonplace in American shopping malls on a summer day. Even venturing into “conservative” sections of the city, one could find clusters of restaurants filled with carefree Syrians, partying late into the night, playing cards, eating elaborate pastries, drinking beer and whiskey, and smoking hookah. There were plenty of mosques, but almost every neighborhood had a large church or two, and crosses figured prominently in the Damascus skyline. As I walked near the old walled section of the city, I was surprised to find entire streets lined with large stone and marble churches. At night, all the crosses atop these churches were lit up — outlined with blue fluorescent lighting, visible for miles. In some parts of Damascus, these blue crosses even outnumbered the green-lit minarets of mosques.

Before the current conflict Syria had about two million Christians, nearly all of them Orthodox and Catholic, living peacefully with their Muslim neighbors, often in mixed villages and urban neighborhoods throughout the country. To many Americans, “Middle Eastern Christianity” sounds like an oxymoron, or is at the very least highly suspect. Though they’re part of an unbroken tradition that goes back to biblical times, Arab and Eastern Christians who come to the United States are often asked, “When did you convert from Islam?” In the years right after 9/11, when Syria was said to belong to the “axis of evil,” such flawed assumptions became even more deeply ingrained.

After the Syrian civil war began in 2011, much was made in the international press of Syria’s “tribal and sectarian” fault lines. But the Syria I encountered was a notably secular and pluralistic society, especially when compared with some other countries in the region. What bound Syrians together was not Islam but Arab nationalism and secular socialist institutions.

Many of the families that graciously hosted me in the years just before war broke out didn’t even know the religious identity of their next-door neighbors. (I am told that was also true in Baghdad before the U.S. intervention in Iraq.) Many Syrians complained openly to me about the corruption of the Ba’athist regime. But they also conceded that, while the Syrian government was deeply authoritarian in many respects, it generally allowed (and enforced) social and religious openness.

The Syrians I stay in touch with now see themselves as the powerless victims of a proxy war between global powers. As one woman recently put it, “My country has become one big weapons bazaar, and we want the shipments to stop.” Pre-war Syria was certainly not ideal. But the fruit of revolution — a country thrown into a state of utter chaos and destruction, cyclic violence, and economic ruin for years to come — has proved to be the greatest of all possible evils.