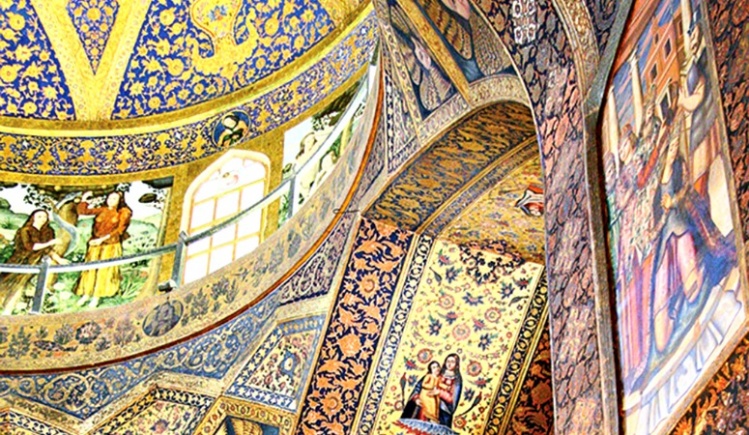 On a dimly lit side street in central Tehran, a bright yellow light shines above a wooden door. Step inside and you might imagine you had left the Islamic Republic. An unveiled woman greets guests and leads them to a spacious dining room, where other women have hung their veils and monteaux at the door. It is early summer, so sleeveless tops reveal bare arms and shoulders. When one patron produces a bottle of Scotch, a waiter brings him a tumbler with ice.

This is one of Tehran’s three Armenian clubs—informal “Islamic-free zones” where Armenian Christians can socialize without the constraints of Islamic law. There are other kinds of Christians in Iran—Assyrians and Chaldeans, Roman Catholics and Eastern Orthodox—but Armenians are the most numerous. It is estimated that there are three hundred thousand of them in Iran. They are allocated five seats in the religious-minorities section of parliament, freely attend services in the six hundred Armenian churches throughout the country, hold observer status on the powerful Guardian Council, and operate their own schools so that their children can be taught in the Armenian language.

Christianity has a long history in Iran. The Acts of the Apostles tell us that Parthians, Persians, and Medes converted to Christianity at Pentecost, and the Parthian kings allowed the new religion to spread throughout the empire. Christians fleeing Roman persecution found a safe haven there. But for the next fifteen hundred years the fortunes of Persian Christians were subject to the political conflicts that swept across Asia. The fourth-century Zoroastrian ruler Shapour II initially allowed religious freedom but then cracked down on both Christians and Jews. In the early centuries of Islamic rule, Christians enjoyed the status of a protected minority, but the Crusades revived old religious tensions. The early Mongol rulers converted to Christianity after they invaded in the thirteenth century, but when later rulers opted for Islam, Christians were again persecuted.

The Armenian community of Iran was formed in 1603, when Shah Abbas allowed five-hundred thousand Armenian Christians who were persecuted by the Ottoman Turks to resettle in Esfahan. Three centuries later, the Armenian genocide of 1915 led fifty thousand more Armenians to seek refuge in Iran, primarily in Tabriz, Tehran, and the enclave of Esfahan that had come to be known as New Julfa, after the city in Azerbaijan where the Armenians originated. As Reza Shah and his son Mohammed Reza Shah sought to modernize Iran in the twentieth century, Armenians rose to high positions in the government, as well as in the arts and sciences.

Since its construction in 1606, Vank Cathedral has served as the spiritual heart of the Julfa district. It is also one of Esfahan’s major tourist attractions. Christian pilgrims, foreign tourists, and visiting Iranians all pass through its gates. In one corner of the cathedral’s grounds stands a memorial of the 1915 genocide—a slender spire encircled by an apron of grass. Inside the Armenian Museum, photographs and documents offer a moving record of the genocide. Visitors, both Christian and Muslim, also gaze at handwritten Bibles, distinctive crosses, vestments, and chalices.

The main attraction is the cathedral itself, where the beauty of the Armenian religious tradition is revealed in all its glory. At the top of the central dome the creation story is painted in patterns of blue and gold. Winged cherubs, a traditional Armenian motif, decorate the stone columns, and traditional Persian imagery appears in the floral patterns that adorn the entrance ceiling.

The cathedral isn’t the only church in Julfa. Knock on the wooden door of the Church of St. Mary and a caretaker will open it to admit visitors to the inner courtyard. Built by a wealthy silk merchant in the seventeenth century, St. Mary’s was later expanded to accommodate overflow crowds. Then there is the Church of Bethlehem, where the life of Jesus is portrayed in seventy-two wall paintings. The crosses of both churches rise above their central domes to share the skyline with the local minarets.

Many Westerners think of Iran as a theocratic monolith. They would no doubt be surprised to discover Christians of various kinds living there comfortably. Some of these Christian communities are ancient; some arrived more recently, seeking asylum. But even the newcomers now regard Iran as their home. They think of the Shiite majority not as their hosts, but as neighbors with whom they have much in common. For example, Muslim and Christian Iranians are united in their enthusiasm for the recent nuclear deal, which will release their country from stifling economic sanctions. In an interview with the Fides News Agency, Hormoz Aslani Babroudi, director of the Pontifical Missionary Society of Iran, offered his endorsement of the agreement: “Christians, along with all the Iranian people, are rejoicing because their prayers were answered. From now on it will be easier for the world to have a positive view of Iran.” He added, “We do not consider ourselves foreigners but Iranians, and we are proud of it.”

To Catch a Thief