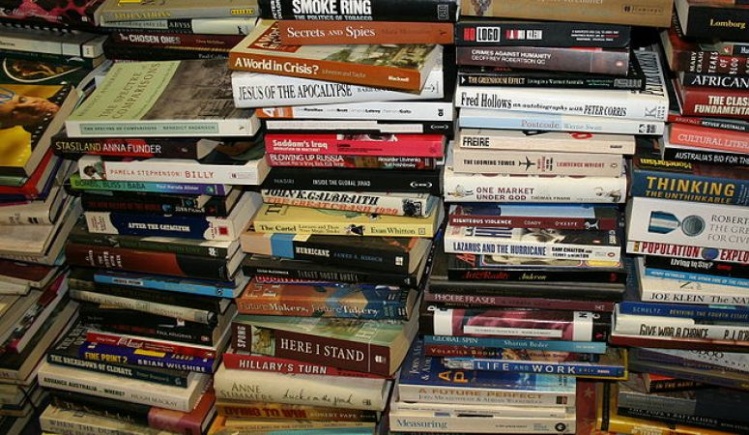 My father, Owen McGowan, grew up poor during the Great Depression. Books saved him. Of the seven children in his family, he was the only one to go to college, a feat he achieved by entering the Maryknoll seminary. It wasn’t a calculated decision—he genuinely believed he had a vocation. But nine years later, he realized his mistake and returned to Fall River, the working-class city in Massachusetts where he was born and raised.

Fall River in the late 1940s had many of the features it still has today: high unemployment, limited intellectual curiosity, distrust for anything “different.” So Dad’s decision to open a Catholic bookstore wasn’t exactly a smart financial move. Selling books, especially Catholic books (The Splendor of the Rosary, Holy Poverty), was not the road to wealth and the store’s location opposite the public library was a little ironic.

Selling books was the road, however, to friendship, romance, and, ultimately, love and marriage. Faced with dwindling sales, Dad established a lending library within the bookstore, hoping that once customers got hooked as borrowers, they would want to own books themselves. Way ahead of his time, he set up a book club that anyone could join, and passionate discussions on Graham Greene’s latest novel or C. S. Lewis’s The Four Loves would go on long past closing time. On a book-buying trip to the publishing house of Sheed and Ward in New York City, he met my mother, who was working there as an editor. After a relentless courtship (she was reluctant to give up NYC for Fall River—and who could blame her?), they married in 1954. The bookstore was by then a thriving little world of progressive Catholic thought. Dad started a lecture series and invited people like Dorothy Day, Frank Sheed, and Catherine DeHueck Doherty to speak. Friendships flourished; my parents were never happier.

But Dad wasn’t cut out for sales. After he finally closed the store, he and my mother made a point, and also a kind of game, of paying off their many bills. Even though they had declared bankruptcy and, legally, could have walked away, they felt honor-bound to settle every debt. For years after the shop closed, they gave each other paid bills as Christmas, birthday, and anniversary gifts—all wrapped up and shining. Except for Hallmark. As a religious bookstore owner, it galled Dad a little that his biggest sales came from Hallmark. But those cards were their safety net. The rosaries, the statues, the pious books—none of them sold as well. So when my parents declared bankruptcy and informed all their creditors that they still intended to settle their bills, it surprised them that every one of them wrote back sternly with terms and conditions all spelled out. Except for Hallmark, the creditor to which they owed the most money. Hallmark replied: “Case closed. All is forgiven. This debt is over. We don’t want your money.” Dad sent them little checks regardless: $31 this month, $22 the next. They were never cashed. After several months Hallmark wrote to ask: “What is it about ‘over’ that you don’t understand?”

With children arriving regularly (seven in eleven years), Dad needed an income. Books were still his passion, but having failed at selling them, he thought long and hard about the public library he’d looked at all those years from behind his quiet cash register. It just seemed like a better fit. When a job came up for chief librarian at the state college, he applied and was hired. Finally, he could give books away for free and get paid for it. His lifelong passion for sharing knowledge and the arts continued, only now he had a budget. Never in the life of the college had there been so many remarkable events: Desmond Tutu, Seamus Heaney, Dorothy Day (again), Daniel Berrigan, Sr. Corita Kent, famous artists as well as people only my father had heard of. It didn’t matter. Everyone knew: If Owen was organizing it, it was going to be great.

Dad turned out to be a wonderful administrator. His secret was simple: “I like to say yes,” he told me once. “Whenever a staff member makes a request, I try to make it happen.” That principle has guided my own career and that of my siblings. Now that many of us are in positions of authority, we are often approached for extra leave or permission to adjust a schedule or to bring a child to work. Whenever that knee-jerk “Why should I?” reaction occurs, we ask ourselves what Dad would do. The answer is always the same: Try to say yes.

My father died in August. At his funeral, we heard story after story from people whose lives he had transformed, people for whom he had opened a door or deleted a record, people he had set on the right road and given a second chance. “They should make a postage stamp with him on it,” one guy told us at his wake. “I owe him everything,” said another. “He believed in me. He changed my life.” The funeral home made holy cards with his photo and a poem he liked. I took more than my fair share, and I use them as bookmarks. In the bathroom, there’s one tucked into Words in Air, the collected letters of Robert Lowell and Elizabeth Bishop; in bed, before falling asleep, I say goodnight to Dad as I mark my place in Nicole Mones’s A Cup of Light. He is everywhere I am, as long as I’m reading.