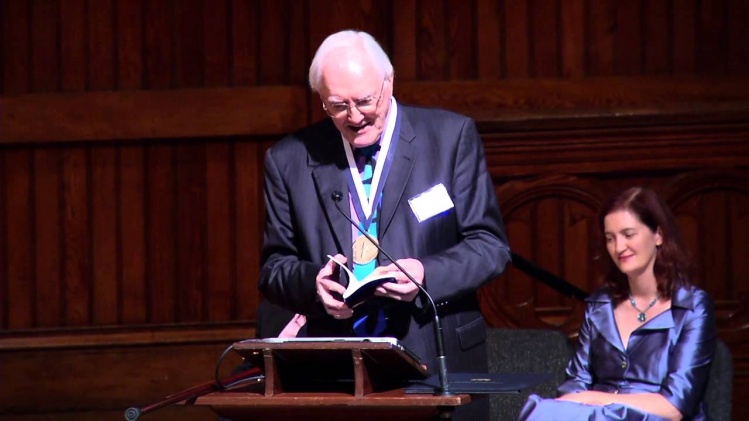 One of the pleasures of subscribing to Commonweal for the past fifteen years has been the knowledge that every once in a while you’d get a review by Denis Donoghue—and the confidence that, in that review, you’d see critical intelligence at its highest. Donoghue died this Wednesday at the age of ninety-two. There will be no more reviews, in Commonweal or in the many other places Donoghue published. And there will be no more books.

Of Donoghue’s thirty some books, I’d be hard-pressed to pick a favorite. There’s Speaking of Beauty (2003), a tactful but impassioned book that announces its mission early on—“My theme is not beauty but how we talk about it; how they, you, and I talk about it, and why we say the things we say”—before touching on taste and the ability (or inability) to educate it, Keats and Kant, the sublime and the ugly. There’s Adam’s Curse (2001), one of the best books on religion and literature published this century. And there’s his underrated 1990 memoir about growing up Catholic in the Northern Irish seaside town of Warrenpoint. In that book, he explains why he never tried his hand at writing poetry or fiction: “I knew that my intelligence was not of a creative kind.... The best fortune [my writings] aspired to was adequacy: they were good enough if they were justly responsive to something someone else had done.” So much of Donoghue’s ethos is in that last sentence: the wisdom that comes from knowing what is beyond one’s capacities, the notion that the good critic is judicious above all else, the humility before the thing he’s responding to. He once wrote of T. S. Eliot, “Eliot makes me feel that his ways with the English language will continue to be opaque, no matter how much time and concern I spend on them.” Precisely because he felt this way, Words Alone (2000) makes Eliot’s poetry feel less opaque, or at least allows us to see its opacity more clearly.

R. P. Blackmur, an earlier critic much admired by Donoghue, described criticism as “requir[ing] a constant intricate shifting and catching of balance.” Donoghue performed this balletic dance with tact and honesty. He wanted to get things right, or as right as we can get them: schooled by the Christian Brothers in the ways of original sin, he knew how inevitably we fall short. He demanded that poets and novelists and critics strive for rightness, too. He always gave you the sense that whatever he wrote about—beauty or violence, grief or God—mattered. That, in the end, is the critic’s great task. Joseph Conrad said that the novelist must “make you see.” The critic must make you care. Donoghue performed that task beautifully.

The critic must make you care. Donoghue performed that task beautifully.
sharetweet

I’ve been rereading with great pleasure the pieces that Donoghue contributed to Commonweal. He could be tart, as in his assessment of W. H. Auden: “Whatever lives is holy, he liked to tell himself. In prose, his later thoughts are unobjectionable, except that they deal with every question by begging it.” He could be funny, as in his remembrance of a poetry reading given by William Empson and interrupted by the poet’s wife: “After the second poem, as I remember, Mrs. Empson called out: ‘William, you’re very boring.’ He let that pass. But after the next poem she called out more formally: ‘William, you are very boring.’ Empson stopped, looked at the audience, and said: ‘My wife tells me I am very boring.’” And he could be, always was, demanding. In 2010, he wrote on Terry Eagleton’s On Evil. Here is a long excerpt, revealing Donoghue’s intellectual range, the care with which he read, the wit with which he wrote, and his unwillingness to have any truck with imprecise language or argument:

Eagleton offers only the usual rhetoric of the rueful Left, denouncing “the reputable middle classes”—to which he and I comfortably belong—and praising “the dappled unfinished nature of things” (a nice little tribute to Hopkins) and the merits of “creatureliness,” whatever he deems that to mean. We read of “creaturely existence,” twice, “creaturely life,” twice, “a meaningful creaturely life,” and “creaturely things.” The OED is penurious on this word. It gives “the acknowledgment of creatureliness, of absolute dependence, of having nothing, but receiving all things from God.” That can’t be what Eagleton means. Someone in the seventeenth century referred to “the creaturely humanity of Christ.” Eagleton doesn’t say, in any of his uses, what he means by it. At a guess, I would say he means the acknowledgments we make—or should make—to one another, in recognition of our mere common humanity. The only pointed use of the word I find before Eagleton is in Erich Auerbach’s Mimesis: The Representation of Reality in Western Literature (1946), where it is referred to by Auerbach as “the new word ‘creatural’” and by his translator who says: “Kreatürliches: the word, a neologism of the 1920s, implies the suffering to which man is subject as a moral creature.” During the last centuries of the Middle Ages, according to Auerbach, “the ‘creatural’ aspect of Christian anthropology—life’s subjection to suffering and transitoriness—comes out in crass and unmitigated relief.” A sense of such woe is clearly a virtue, but it could hardly be the means of social transformation that Eagleton invokes. If that is all he offers, it wilts into an empty formula.

Donoghue exhibited a healthy, though not unkind, skepticism. He hated cant, even when it came from one of the greats. In Adam’s Curse, he quotes Wallace Stevens on the death of the gods and the new fictions with which poets will replace them. Then he writes, “These sentences are so handsome that I am reluctant to deride their assertions. But it is hard to take them seriously as an account of the pagan gods, the Christian god, and the beliefs they provoke.” He continues: “The main problem with Stevens’s procedures is that he seems to achieve his ends at little cost.... If you can translate ‘God’ as ‘the imagination’ and effect the translation as swiftly as Stevens did, you are not spilling real blood or crying bitter tears.”

The false ease with which Stevens translated the transcendent into the secular—the sense that such a translation could come without cost—annoyed Donoghue. Donoghue was Catholic, and Warrenpoint stresses that to be Catholic is to know that nothing but God’s grace comes without cost. The flipside of that, though, is that God’s grace can and does come. In Speaking of Beauty, one senses that Donoghue’s favorite thinker on aesthetic issues is the theologian Hans Urs von Balthasar. Von Balthasar, Donoghue writes, “is probably the most arduous of [the writers he considers]. If we took him as seriously as he deserves, we would have to change our lives.” Donoghue was occasionally wary of Stevens precisely because Donoghue took these things—Stevens, truth, beauty, God—seriously.

Seriously, yes, but never stuffily. Man, could he hook the reader’s attention. Take a look at the opening to a 2009 piece; it involves the poet Frederick Seidel, a dinner, and truffles possibly flown in from Italy. Or consider the dry one-sentence paragraph concluding his review of Eagleton: “I report, without comment, that the book is dedicated ‘To Henry Kissinger.’” Donoghue ends his introduction to the stories of J. F. Powers by describing his initial encounter with “Renner”: “The first time I read it, I knew I was reading the work of a master. A work of literature is a book you’d be happy to read again and again—like the book in your hand.” Every time I read Donoghue, I knew I was reading the work of a master. I look forward to happily reading him again and again.

Published in the May 2021 issue:
View Contents
Tags
Books
Literature