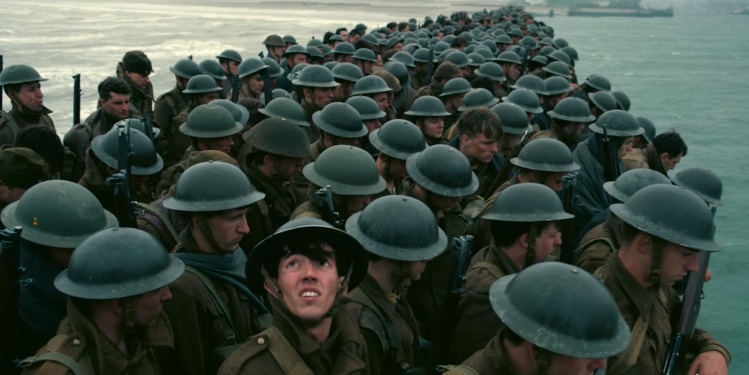 While embedded with the U.S. Army’s 173rd Airborne Brigade in Afghanistan, journalist Sebastian Junger asked the soldiers why they fight: What keeps them going in the face of suicide bombs and IEDs? In popular imagination, it’s patriotism, a sense of duty. But in his 2010 book War, Junger reveals a different explanation: A sense of duty might inspire soldiers to enlist, but what keeps them going in the thick of battle is survival. “There’s so much human energy involved,” Junger writes, “so much courage, so much honor, so much blood—you could easily go a year here without questioning whether any of this needs to be happening in the first place.” In the moment, when your survival is on the line, the philosophical, political, strategic, and moral dimensions of the broader war don’t mean much.

Dunkirk, Christopher Nolan’s film about the spring 1940 rescue of British soldiers on the beaches of Dunkirk, France, has been lauded for its realism in depicting the experience of war. Less a “war movie” than a survival story, Dunkirk focuses not on the fight with the enemy, but on the desperate, circumstantial, and contingent ways that soldiers tried to stay alive.

The film interweaves three narratives, each with its own settling and timeline: The events on land occur over the course of over a week; on sea, in a day; and in the air, an hour. Scenes cut abruptly from calm to peril, from day to night, from aboveground to below water. The film is loud, ideal for theater sound-systems and the big screen: aerial bombs and torpedoes erupt as Hans Zimmer’s screeching score digs and devastates. But at other turns, the film’s lack of dialogue, as well of its rejection of character development (and sometimes even the naming of characters) or linear plot, makes other moments feel ominous and hushed. Little is conveyed with words, and almost everything by suggestion: grimy faces, the reassuring hand on a gun, a wary glimpse at a fuel gauge.

I am a civilian and have never been anything else, so I have to take the word of people with combat experience who have called the movie realistic. But what I can attest to are the feelings of panic and dread—maybe even the trauma—that Dunkirk evokes for the viewer. We meet the soldiers on the beach much as they might have met one another—anonymously, shivering in the cold, bitter about their plight. There are no backstories, no self-reflective montages; indeed there is no escape. The bombardment of sound and image induce a sort of tunnel vision. The camera inverts and spins when a ship flips and fills with water, when an explosion throws you off a boat. If you were to try to sort out all these stimuli and deal with each in turn, you would be overwhelmed, paralyzed. Even the film’s disjointed plot underscores the chaos of battle: time slows down or speeds up, dilates and contracts. It’s dizzying and chaotic. Survival becomes contingent, utterly random, as unpredictable as the bombers in the sky or the torpedoes in the water. Even as you wait for the victory you know is coming, by the end of all this, it doesn’t feel too victorious.

Does the identity of that enemy matter?
sharetweet

Dunkirk sits uncertainly in the contemporary canon of World War Two films. It doesn’t have the patriotic payoff that a Saving Private Ryan or Band of Brothers does. There isn’t much sense of success or finality, no devotions to the folks back home, no swelling music to wrap up a scene or send viewers home emotionally satisfied. All of this would have lent context—something Dunkirk goes to great lengths to avoid. Writing in The Wall Street Journal, Dorothy Rabinowitz criticized this approach, calling it a “dumbing down of Dunkirk.” With few references to the broader war, next to nothing about Churchill (other than one character’s reading an excerpt of his post-rescue speech), and barely a mention of Germany, what transpired at Dunkirk is in Rabinowitz’s opinion “flattened out, disconnected from the spirit of its time.”

But Dunkirk isn’t trying to be a period piece, nor does it want to treat us to familiar images of the Good War. If its goal is to re-create the experience of soldiers who had nothing on their minds but surviving the next week, day, or hour, it can’t let us reflect on “the spirit of the time.” Churchill’s role in the soldiers’ ordeal was exactly what we saw in the movie: nothing, until some of them got home and could pick up a newspaper. The same is true for the absence of Germans. At Dunkirk, planes, torpedoes, and bullets issue from unseen, faceless enemies; in that moment, does the identity of that enemy matter?

Junger would remind us that soldiers aren’t acting out a part in political history; even if we want them to, their battlefield experiences won’t fit neatly in the future’s history books about “our times.” In the moment, their priority is survival, individual and collective, and their valor is for each other. Nolan has said that because Dunkirk is devoid of the trappings of the World War Two story, it’s “a universal movie.” I’m not sure about that, but it is a different way to think about what counts as history.