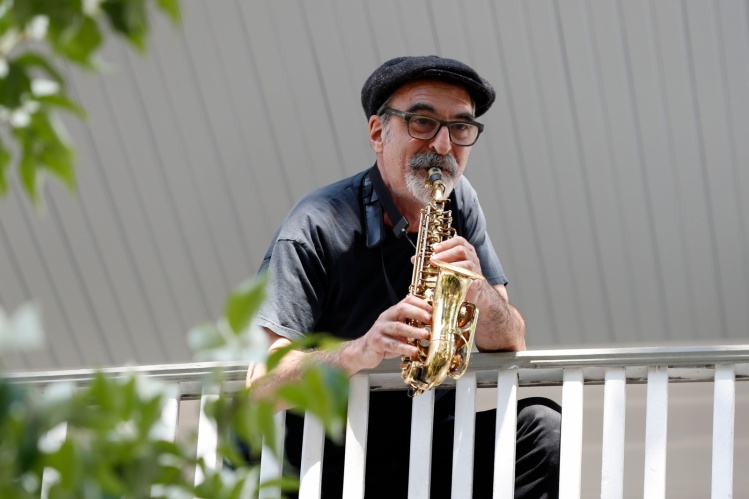 By conventional measures, religion took a big hit during the pandemic. Houses of worship were shuttered. Major holidays like Easter, Passover, and Eid al-Fitr were observed on the calendar but without the ordinary group celebrations. And major rituals like baptisms, funerals, and weddings took place via Zoom. But the spirit blows where it will, giving form to the void, and during extraordinary times like this one, it can give new meaning, depth, and understanding to what religion is, or could be.

My own neighborhood in Brooklyn, as religiously diverse as any place in the country, and probably as non-religious as any part of New York City, taught me that lesson over the course of eighty-two days, starting in late March. That’s when my neighbor, Roy Nathanson, came out onto his second-floor porch with his alto saxophone and, at precisely five o’clock in the afternoon, performed a solo rendition of “Amazing Grace.” These were the darkest days of the pandemic. We had just gone into lockdown; the city was suddenly the global epicenter of the coronavirus; and deaths and illness were spiking by the day, especially in our own zip code, which had one of the highest infection rates in the country.

Roy wanted to do something to push back against the despair that was spreading along with the disease. Jazz is Roy’s vocation. He came up with the Lounge Lizards and co-founded the Jazz Passengers, and he’s also worked with the likes of Elvis Costello and Debbie Harry. He is a great performer. He is also a teacher by nature and was, for many years, one by profession in the New York City public schools. He is an evangelist of music who knows its power to bring people together and change their mood.

So Roy began with the national hymn of hope. No encores, no singing. Next day, same thing. Over the coming days other musicians began to join him. A kind of socially distanced sidewalk ensemble took shape. Lloyd Miller, a songwriter and performer who lives downstairs, anchored it with his upright bass. Eric Alabaster, a retired teacher and drummer who lives around the corner, brought a drum set every day. Mo Saleem played his dholak, a two-headed hand drum. Mo is from Pakistan and would normally be busy playing gigs at South Asian event halls in the area so that he could send money back to his family. But the pandemic killed the work and Mo couldn’t even get back to Pakistan. Eddy Bourjolly, a jazz guitarist from Haiti, came in every day from Canarsie with his electric guitar and a small amp. Albert Marquès, a jazz musician from Barcelona who teaches in the public schools, played the melodica while managing to keep his two young children somewhat distracted. (They played a jazz version of “Let It Go” one day to make Albert’s daughter happy.) Roy’s son Gabe joined in with his trumpet after his college suspended classes and sent him home. Banjos and flutes made an appearance now and then, and there were sometimes a few more horns. My next-door neighbor Louis sat in with his conga once in a while. Aidan Scrimgeour, a young piano teacher from up the street, brought another melodica, and Gabe Garcia, a brilliant young musician, brought his sax.

They played through rain and wind. Street life hummed along with the instruments.
sharetweet

The playlist also began to vary, with recognizable favorites like “Stand By Me” followed by a stirring Billy Strayhorn number the next day. The death of Bill Withers on March 30 prompted renditions of “Ain’t No Sunshine” and “Lovely Day,” and we got “Tennessee Waltz” and “My Favorite Things.” They played “Go Down, Moses” on Passover and “Lal Shahbaz Qalandar” on Eid al-Fitr, in honor of the Sufi saint and mystic who is revered in Mo’s homeland. “Amazing Grace” was always the inspiration and default.

They played through rain and wind. Street life hummed along with the instruments. In the first weeks, ambulance sirens were a mournful counterpoint to almost every performance. The Q train rumbled along the track behind Roy’s house, its horn blasting on occasion. Delivery vans and box trucks made their way up the block, sometimes slowing to catch a few bars of music. Pedro the postman weaved through it all to deliver the mail. Curious passersby stopped to listen. Some were strangers, some neighbors. There were skateboarders and cyclists, dog walkers and strollers. All the colors and creeds of the neighborhood would stop and listen. Some wept, all applauded, and of course everyone began taking cellphone videos. We had to capture this moment.

As the weather improved, the onlookers increased; there were maybe twenty-five or thirty some days. In May, as the dogwood in front of Roy’s house bloomed, lockdown life began to ease. Spirits lifted: the tunes grew more up-tempo, more diverse. It was never a jam session. Each day the music was posted online for the performers. All was intentional, planned. Maybe even, well, liturgical? I came out every day to watch, to appreciate this prayerful interruption. Ora et Labora, the Rule of Benedict has it. We reversed it: work, then prayer. We began to collect money to help those without work and for local social-service groups.

“Father!” Roy yelled out to me one morning a few days into the five o’clock routine. (When you write about religion—especially Catholicism—for a living, a clerical title comes with the territory; it’s the only way your newsroom, or neighbors, can classify such an odd duck.) “Man, what is this thing? I mean, it’s a religious thing, but what is it?” We talked about it on several walks around the block over many days. I suggested a Jewish prayer, out of deference to Roy, but he wasn’t buying it. It’s pretty Catholic, he insisted. Probably so, I finally agreed. I mean, vespers and all. Roy, a voracious reader, knows his Durkheim, knows the varieties of religious experience. My friend and neighbor Michael Powell, who wrote a lovely New York Times column about our daily jazz, describes Roy as an intense mensch with “a gray-flecked goatee and a Groucho Marx smile.” Roy marveled, as I did, at the power of this simple routine. “Everything had stopped. I had no more gigs,” he told Powell. “I had seen the Italians singing off their balconies, and I thought, yeah, yeah. I want that secular-religious healing thing to happen here.”

It clearly responded to a spiritual need. The sweet irony is that jazz, as Neil Leonard wrote in Jazz: Myth and Religion, was once anathematized as “the Devil’s music”—a perversion of art that threatened American society. Instead, it became an incantatory and ecstatic form of religious expression, with myths, rituals, and high priests who formed communities around their work. “I am a devout musician,” said Charlie Parker. His admirers would agree. In recent decades, jazz has migrated into actual sanctuaries, as congregations try to draw new members and make more overt the connection between music and spirit. It’s had mixed results.

Rites are hardly empty, even if they are often unfulfilling, or I don’t fulfill them. That’s why they’re rituals: you come back the next day and try again.
sharetweet

But Coronatide, as our extraordinary time has been dubbed, obliterated the usual sacred spaces and practices. There was a vacuum. Was this thing that Roy & Co. did every day filling that gap? Creating something new? Pointing to something old? “Man, if you have to ask what it is, you’ll never know,” Louis Armstrong said about jazz. Same with religion, I often think. There are as many definitions of religion as there are religions, most of them cross-cutting and overlapping. A religion is a community of meaning for some. It can also be a shared faith in something supernatural. Or a tribal bond, or an affective commitment. Or it’s William James’s “mass of habits.” Nothing wrong with that. As Jonathan Z. Smith notes in his classic essay, “Religion, Religions, Religious,” all religions tend to organize around some sort of ritual. “People could not be gathered together under the name of any religion, whether true or false, if they were not bound together by some sharing of visible signs or sacraments,” wrote St. Augustine.

In the Evangelical Christian world that raised me, the word “ritual” was always preceded by the word “empty,” and usually deployed in connection to Catholics, and of course Jews and all those old religious traditions that just “went through the motions.” This is as much a national bias as a sectarian prejudice. Americans rush to define themselves as “spiritual but not religious,” wanting the halo effect of faith without the embarrassing fulfillment of regular obligations. But ritual has its place. I became Catholic in part because I realized that rites are hardly empty, even if they are often unfulfilling, or I don’t fulfill them. That’s why they’re rituals: you come back the next day and try again.

During Roy’s five-o’clock run I was reminded of a passage from The Little Prince when a fox finds the disconsolate boy and asks him to tame him so they can play together. “One only understands the things that one tames,” says the fox. “If you want a friend, tame me.” That takes time, the fox cautions, and patience, and earning trust through regularity and reliability—same thing at the same time, every day. “If you come at just any time, I shall never know at what hour my heart is to be ready to greet you.... One must observe the proper rites.”

“What is a rite?” asks the little prince.

“Those also are actions too often neglected,” says the fox. “They are what make one day different from other days, one hour from other hours.”

These jazz vespers gave shape to our extraordinary time, which was otherwise so undifferentiated. Neighbors who knew each other by sight now knew each other by name; acquaintances became friends; friends introduced us to strangers. We tamed ourselves amid this wildness—or, rather, the rite tamed us.

Ordinary time always returns, of course, and the final concert was on a sunny Sunday afternoon in late June. It was two hours of wonderful music, though not quite representative of the previous eighty-one days: more songs, more people, the street blocked off. It ended with an a cappella “Amazing Grace.” No instruments, just the crowd singing. Everyone knew the words, though we of course didn’t venture beyond the first verse. Honestly, what congregation could, without a hymnal?

This ritual had ended, but it continues to bear fruit. The musicians created a website, 5PM Porch Concerts, to raise money for community agencies helping the neighborhood recover from the pandemic. They set up a program to give music lessons on various front porches to any kid in the neighborhood, regardless of ability to pay. Other plans are in the offing. Faith and hope are wonderful, but charity is the best.

David Gibson is the director of Fordham’s Center on Religion & Culture.