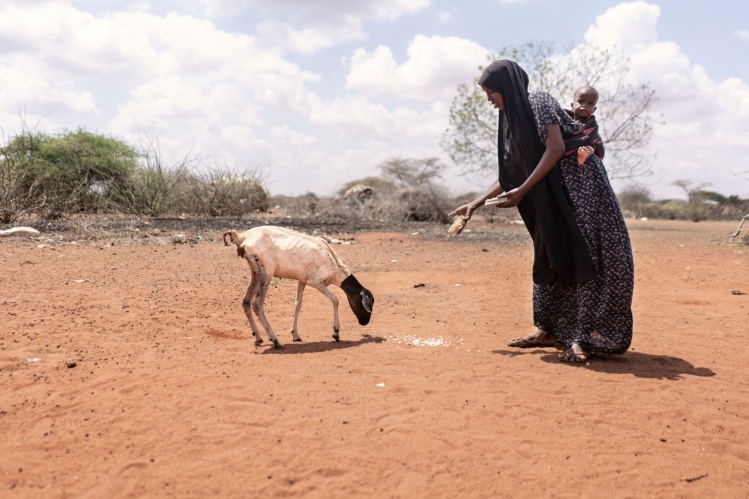 A woman feeds her goat outside her house amid the the lack of grazing lands in the drought-stricken town of Wajir, Kenya, Dec. 2, 2021. (CNS photo/World Food Program handout via Reuters)

Like previous climate conferences, November’s COP27 has inspired both enthusiasm and frustration. For two weeks every year, the United Nations Framework Convention on Climate Change gathers leaders and representatives from 196 countries who meet alongside grassroots activists, major environmental groups, and delegates from the fossil-fuel industry to discuss climate change. This year, the gathering was held in the Egyptian resort town of Sharm el-Sheikh. It has been called the “African COP,” and it has given special attention to addressing the inequality between the developed nations that emit the most and the developing nations that are most vulnerable to climate change’s effects.

Funding to redress this inequality has traditionally been allocated to two different strategies: mitigation (preventing future emissions) and adaptation (building natural and engineered infrastructure to increase resilience), with heavy emphasis on the former. However, this year a third strategy has moved to the fore: “loss and damages.” Such funding recognizes that, in much of the world, the damaging effects of climate change—floods, droughts, destruction of homes and farms, significant losses to national economies—have already arrived.

Such failures can make every climate conference seem hollow.
sharetweet

Unsurprisingly, developed nations have not followed through on their previous non-binding pledges to provide $100 billion a year—a woefully inadequate sum—toward climate compensation. (The U.S. contribution has been particularly meager in view of our nation’s wealth and disproportionate responsibility for global emissions.) The leaders of two of the four largest global emitters, China and India, did not attend COP27, and both continue to classify their countries as emerging economies so as to be excused from contributing to any of these funds. Where they are available, the compensation funds are often offered as loans rather than reparations, adding to the crushing debt many of the recipients already hold. The need for such compensation is only going to increase. The countries that signed on to the 2015 Paris Agreement, including the United States, have failed to meet the benchmarks that would limit global warming to 1.5°C above preindustrial levels. Such failures can make every climate conference seem hollow, a series of empty gestures belied by the world’s inability to prioritize long-term sustainability over short-term growth.

It doesn’t help that there are more than six hundred fossil-fuel representatives at the conference, or that it is sponsored by Coca-Cola, the world’s largest plastic polluter. Despite their greenwashing efforts, these corporations and industries have little interest in the real changes required to address the crisis. Egypt, the host country, has also used greenwashing to hide its appalling civil-rights abuses, which include throwing climate activists in jail, preventing protests, and censoring environmental research. Egyptian groups touting the progress of domestic renewable-energy projects are welcome, but critics of Egypt’s authoritarian President Abdel Fattah el-Sisi can face life in prison or the death penalty. Foreign delegates have done little to express solidarity with political prisoners or exert pressure on the Egyptian government to ensure basic standards of human rights.

Despite this, COP27 is still important. Each day of the two-week agenda follows a particular theme, from agriculture to water to decarbonization, all of which are crucial in developing a sustainable future. And the conference provides a major platform for those seeking climate justice around the world. Island nations overwhelmed by hurricanes and rising sea levels can call for a fossil-fuel nonproliferation treaty. Amazonian Indigenous groups can demand protection from deforestation. Representatives from South Africa’s Wild Coast can draw attention to their fight to prevent mining on their land. For countries like the United States, which has taken a step in the right direction by passing major climate legislation this year, the conference is a reminder of what we owe to the rest of the world, and an opportunity to start paying up.