President George W. Bush concluded his final debate with John Kerry by declaring his faith in "the ability of liberty to transform societies, to convert a hostile world to a peaceful world." Now part of his rhetorical repertoire, this statement springs not just from the religious basis of his thinking, but more importantly it is a core principle of what is called the theory of "democratic peace." That theory does not insist that democracies are necessarily peaceful in general. But the last decade of social-science research has produced abundant evidence, besides theory, that democracies almost never go to war with one another. Policymakers from the administration of the first President Bush through that of Bill Clinton have also accepted it. But what this president neglects to mention is that those of us who helped formulate the theory of democratic peace have consistently argued for a second core principle: that a model of "fight them, beat them, and make them democratic" is a very bad idea.

Members of the current administration cite the post-World War II experience of Germany and Japan to bolster their case for invading and occupying Iraq. Certainly the victorious American and British occupation policy was built on the principle that the German and Japanese governments could never be peaceful without democratizing their systems.

But Germany and Japan make poor analogies with respect to the Middle East. The United States and Britain went to war not in order to make Germany and Japan democratic, but to repel a direct attack. Afterward they were willing and able to carry on a long occupation to provide massive economic assistance. Most German and Japanese citizens no longer considered their own governments legitimate. In this respect and others, Germany and Japan met most of the conditions that political analysis has identified for successful democratic transitions and consolidation. In Iraq, the conditions obstructing democratization include low per capita income (at least after years of wars and sanctions), no previous history of democracy, major ethnic and religious divisions, the "resource curse' of an economy and political system dependent on petroleum exports that allows dictators to keep themselves wealthy and in power, and an authoritarian political and social culture. In addition, of the six countries bordering Iraq, all but Turkey are dictatorships, have a history of violent conflict with Iraq, and resist the importation of democracy to their neighborhood. So Bush's goal of establishing democracy in Iraq (even had the occupation and reconstruction not been executed on the cheap with stunning incompetence) was a very hard case to make from the start.

It is not clear how much, or what, the administration has learned since March 2003. There is now talk in Washington of "regime change" in Iran as the next democratization project. Such a project, in a country with twice the population of Iraq and only a little more favorable socio-political profile, would not be more promising. The economic and human cost, to Americans and to Iranians, is unlikely to be less. The Christian just-war tradition demands not just a cost-benefit accounting, but a reasonable chance of success. Some of us who developed the democratic peace proposition now feel our creation has been perverted—a bit like many of the atomic scientists who developed the atomic bomb in order to defeat Hitler, only to see it employed against Japanese civilians who were already near defeat.

Sometimes there is no choice but to defeat a dangerous attacker, and then try to impose a democratic government. That was the case when we invaded Taliban-ruled Afghanistan. But that is quite different from going to war in order to impose democracy. For George W. Bush to justify the Iraq war on that ground is yet one more distortion to cover a disastrous act. Democratization by force all too rarely works, and violates the normative principles of sovereignty on which all weak countries depend.

Related: The War in Iraq: How Catholic Conservatives Got It Wrong by Peter Dula

We the People of God 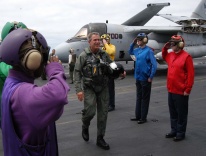