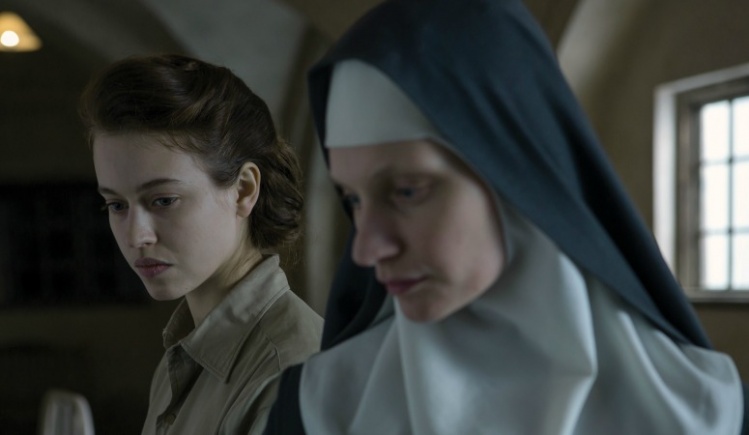 In the very first minute of Anne Fontaine’s The Innocents, serenity fills the screen…and is quickly shattered. We’re in a convent chapel in late-1945 Poland. Bathed in a light worthy of Vermeer, nuns are chanting. Faded blue veils and stiffened white wimples frame faces of enraptured devotion. Suddenly, from rooms away, come the cries of a woman in agony. The nuns do not cease chanting, and show no surprise. But after the service, one of the younger sisters goes to get a doctor. She doesn’t leave by the convent’s front or back door but furtively breaks through a rotted sidewall. When she comes to a Red Cross unit, a French medic, Mathilde, gently rebuffs the nun’s request, telling her to find a Polish doctor instead—Mathilde and her Red Cross colleagues are there to treat only concentration-camp survivors. The nun retreats, but a moment later Mathilde sees her praying on her knees in the December snow. She is visibly desperate. Soft-hearted Mathilde gives in. But what is going on here?

Our puzzlement soon gives way to horror. Months earlier, conquering Russian troops had invaded the convent and, deeming sex to be a battle reward, raped nearly all the nuns. Some pregnancies resulted and now the babies are arriving. Mathilde is told that one has already been born without medical assistance and taken to the peasant relatives of the mother. Although the convent’s Mother Abbess objects to having outsiders know anything about the rapes and pregnancies, she’s somewhat reassured by the fact that the French medic can’t communicate with the nearby Polish farmers in their language. Mathilde continues to serve whenever she can without alerting her supervisors, who would forbid her excursions.

But as she does her exhausted, sleep-deprived best, more and more mysteries surface. Why is the Mother Abbess so obsessed with concealment? She worries that the nuns will be condemned and “evicted” from the convent with nowhere to go. But condemned and evicted by whom? The church hierarchy in Poland? The Vatican? Despite the male hierarchy’s spotty record when it comes to women, including women religious, the viewer may reasonably doubt whether nuns who were raped by soldiers would actually be turned out, deprived of their vocation, and not allowed a word in their own defense. Maybe the Mother Abbess is trying to keep at bay the Russian occupiers, who would welcome a scandal at a Catholic institution as an instance of Western decadence and papist licentiousness. In any case, how can she hope to keep what’s happened a secret when she’s giving the children away to local farmers, who will no doubt gossip about what’s going on when they meet at the local marketplace? There’s as much mystery here as in any detective story. But The Innocents is not The Name of the Rose and Mathilde is no Brother Baskerville. She doesn’t function here as a detective but rather as a healer and empathizer and as the emotional link between us and the cloistered victims. Our curiosity about the Mother Abbess’s actions and fears is put on hold, and won’t be satisfied until the last twenty minutes of the film.

The exchanges between Mathilde and the sisters are sometimes predictable but more often poignant, as when she accidentally arouses a teenaged nun’s laughter with her gynecological probing, a fit quickly suppressed by the Mother Abbess warning glower. Especially vivid are exchanges between Mathilde and the convent’s assistant head, Sister Maria, played with quiet conviction by Agata Buzek. Possessing an intellectual flexibility that inevitably brings her into collision with the Mother Abbess, Sister Maria’s conception of abiding faith is “twenty-four hours of doubt with one minute of hope”—a line that may have been suggested by the spiritual struggles of Mother Teresa, whose passages of doubt became known to the public only after her death. Buzek’s sparkling eyes contrast with the severely horizontal line of her mouth: this is a woman who knew and enjoyed life outside convent walls before accepting the discipline within them.

There is a parallel between Sister Maria, the Polish Catholic, and the French Mathilde, who was raised in a working-class Communist family. Both are utterly dedicated to their chosen fields of service, and both are initially determined to accept the orders of those in charge. Mathilde’s determination collapsed as soon as she saw that young nun praying in the snow. Sister Maria seems made of sterner stuff, but she too will come to feel that obedience cannot be an unquestionable virtue in the face of suffering. In the final scenes of The Innocents, mysteries are solved, solutions found, and disobedience turns out to be a virtue, even in a convent. Only at the denouement does the real theme of the movie emerge: not the suffering of innocents in war, but the clash between those who believe that a convent’s reputation and status quo must be preserved at all costs and those who believe that the servants of the church must be champions of divine love, even if this means that a religious community has to change its entire way of being in the world.

THE ONLY MAJOR FLAW of The Innocents is an odd one: its heroine, Mathilde, doesn’t really fit the theme that so powerfully emerges in the film’s final scenes. Lou de Laâge is a pleasant and responsive actress, both in the convent scenes and in the ones presenting her love affair with a Jewish doctor, amusingly played with sad-eyed basset-hound neediness by Vincent Macaigne. But when her lover complains of Mathilde’s constantly unruffled manner, some of us may second him. The scriptwriters (Fontaine, Sabrina Karine, Pascal Bonitzer, and Alice Vial) have given her a Marxist background, but it doesn’t play a significant part in her dealings with the convent. Wouldn’t the humanism and materialism of her upbringing have made her more impatient with the nuns’ initial reluctance to be examined, and downright furious with the Superior’s recalcitrance toward helpful outsiders. (When the Jewish doctor is finally brought in to help, his brief confrontation with the Mother Abbess has more power than any of Mathilde’s scenes.) And wouldn’t it have been highly dramatic for an atheist to strive to understand the special torment of nuns trying to regain their spiritual equilibrium after being physically violated? But is Mathilde really an atheist at all? She mentions that she’s not a card-carrying Party member, but we never learn what’s behind her serene surface. This lovely sphinx doesn’t belong at the center of this movie, a center that is finally claimed by the Mother Abbess (the powerful Agata Kulesza, the disappointed Communist aunt in Ida) and her antagonist, Sister Maria. Their clash turns up the dramatic heat by several degrees.

With its command of reverberant silences, its conveyance of past horror and ongoing pain, its visual beauty (the eternally diluted blue of Polish winter skies), and, most of all, the perfectly selected faces of the actresses playing the lambs of God, The Innocents does what all good movies do: it lingers with you.

It's Cold Up There