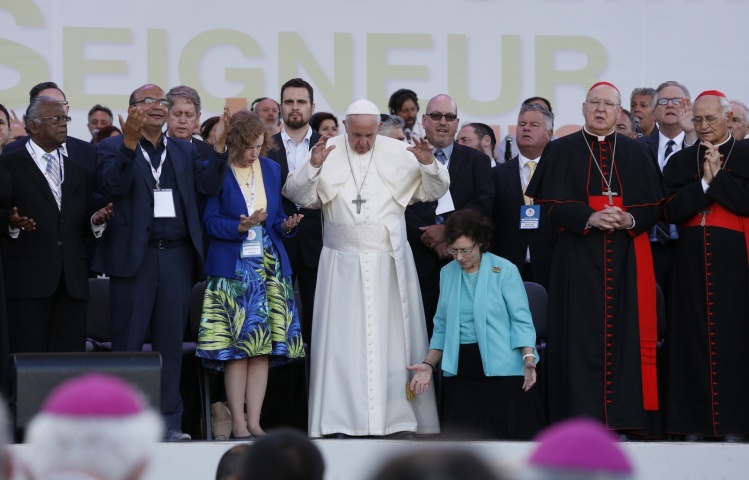 During the modern papacy and especially since John Paul II, Pentecost Sunday has practically become the feast of new ecclesial movements like Focolare, Communion and Liberation, and the Community of Sant’Egidio. In the first week of June, Rome was “invaded” by participants from all over the world gathering for the fiftieth anniversary of the Catholic Charismatic Renewal. Pope Francis presided at the ecumenical vigil of prayer at the Circo Massimo on Saturday, June 3, and celebrated Mass with them on Sunday in St. Peter’s. In his homily, Francis repeated the anti-sectarian message he has given to all the Catholic movements he’s met during his pontificate: embrace unity in diversity, and resist the temptation to focus on differences, to choose to be “[a] part over the whole, to belong to this or that group before belonging to the Church,” or to adopt “rigid and airtight positions.”

This is very much in keeping with Vatican II’s implementation of the “universal call to holiness,” but Francis nonetheless differs from his immediate papal predecessors in dealing with the new ecclesial movements. Specifically, his “ecclesiology of the people” is skeptical of all possible forms of elitism in the Church, including the elitism of the groups that have become more prominently a part of Catholicism since the mid-20th century and especially after Vatican II.

Despite his relatively detached relationship with such movements, Francis knows well this new face of global Catholicism. (His latest important curial appointment says something about that: the new secretary of the recently created [2016] Dicastery for the Laity, Family, and Life is a Brazilian priest, Fr. Alexandre Awi Mello, that nation’s director of the new ecclesial movement Schönstatt.) These groups play an important role in his missionary ecclesiology: Aside from the instruction on the conservation of the ashes in case of cremation, the only document published by the Congregation for the Doctrine of the Faith in the pontificate of Francis is Iuvenescit Ecclesia (May 16, 2016), a letter regarding the relationship between bishops and territorial churches on one side and new ecclesial groups and movements on the other.

Francis realizes that even the pope himself may not be able to stop new ecclesial movements from changing the Church—particularly in terms of the relationship between the laity and the clergy. A brief press release last week reported on a meeting between the pope and the presidents of the curial dicasteries to discuss the issue of priests in the new ecclesial movements, and in particular the possibility of “incardination” within their priestly fraternities. This would represent a significant change, because so far only personal prelatures (like Opus Dei) and ordinariates (like military ordinariates and the Personal Ordinariate of Our Lady of Walsingham, established in 2009 to support the “reunion” of former Anglicans with the Roman Catholic Church) have had this privilege.

These new priestly fraternities vary to some degree. Some are well-established parts of widely known groups like Sant’Egidio, Communion and Liberation, and the Neo-Catechumenal Way. Others have been initiated by local bishops to create doctrinally and liturgically “orthodox” parishes, such as the Priestly Fraternity Familia Christi in my Italian diocese of Ferrara, Italy.

Priests incardinated within new ecclesial movements would not be subject to local ordinaries, that is, diocesan bishops. For the Vatican this would mean acknowledging something about how these movements have evolved from around the time of Vatican II. Originally, they were supposed to have helped renew the laity. But with the substantial reduction in the number of diocesan priests and the shrinking of religious orders worldwide over the last three decades, they instead now seem to be a source of new priests. While this could help alleviate the shortage of clergy in the short term, it might also introduce a new set of problems.

The issue is not ideological, as there is a great diversity among these fraternities: seminarians and priests from Sant’Egidio, for example, are more “conciliar” and ecumenical than those from Communion and Liberation or the Neo-Catechumenal Way. Rather, it’s structural: in order to replace or replenish diocesan seminaries and diocesan parishes that are short on clergy, the “territorial Church”—the bishops, including the bishop of Rome—are making allowances for priestly vocations coming from “non-territorial” organizations: the movements.

This raises four interesting considerations. The first is Church politics: the movements are not, in the eyes of Francis, the special “elites” for the new evangelization as they were under John Paul II and Benedict XVI. Francis has been clearly critical of any sectarian tendencies he detects. But even he realizes that these movements are producing new, desperately needed priests in a Catholic Church that still needs the clergy to function. In this sense, the move, if approved, would signal that the Church finds it much easier to change the relationship between the territorial and personal dimension in the Church than to ordain married men to the priesthood (“viri probati”) or ordain women deacons.

Then there’s the ecclesiological consideration. Reversing the relationship between the territorial or geographical dimension of Church aggregations (parish, diocese) to the personal dimension (membership in a group not defined by geographical location) would overturn a system that dates from the early centuries of Christianity (dioceses were the successors of the provinces of the Roman Empire) and that was solidified in the second millennium, especially by the Council of Trent (1545-1563). It would also pose a challenge to the ecclesial concept of the local church that is in dialogue and tension with the universal the Church.

The third consideration is theological. The whole idea of “enculturation” of the Christian message is connected to the ecclesiology of the local church. It remains to be seen what kind of formation (and where) priests from new movements would receive, or whether they would be priests for the entire Church (including Francis’s “peripheries”) or only for their movement. This issue was raised by John Paul II in the apostolic exhortation Pastores Dabo Vobis (1992), the apostolic letter Tertio Millennio Adveniente (1994), and the apostolic exhortation Vita Consecrata (1996). The relationship between some movements and the local churches has in many cases been less than collaborative; for example, local bishops have long complained to Rome about the modus operandi of the Neo-Catechumenal Way in their own dioceses and even on a national level.

Finally, there’s a historical consideration. In 1513, prior to the council of Trent and the Reformation, the Venetian Camaldolese monks Paolo Giustiniani and Pietro Querini presented to Pope Leo X Libellus ad Leonem X, the most important set of reform proposals in the immediate pre-Reformation period. Giustiniani and Querini proposed, among other things, a radical reduction in the number of religious orders (with just three typologies of rules for religious life: Augustinian, Benedictine, and mendicant) and a more centralized, reformist church under the leadership of the pope and the bishops. But what happened after Trent was exactly the opposite: a proliferation of new religious orders (Capuchines, Barnabites, Jesuits, etc.).

Something similar has unfolded since Vatican II, which envisioned a Catholic Church under the leadership of the bishops and the pope, and less autonomy for religious orders and personal, non-territorial Church structures. Instead, there’s been a crisis in the episcopacy— bishops now function more as CEOs than as pastors; they are called on to act collegially with the pope and synodally with their flock; and they face a fixed retirement age seventy-five—and a shift in how it is expected to work alongside a successful papacy. This comes along with the spread of ecclesial groups and movements tied to “intentional communities” that claim—and obtain—autonomy from local ordinaries. It all would seem to be yet another example of how the living body of the Church undoes the best-intentioned and most well-thought-out reform projects of “enlightened” theologians.