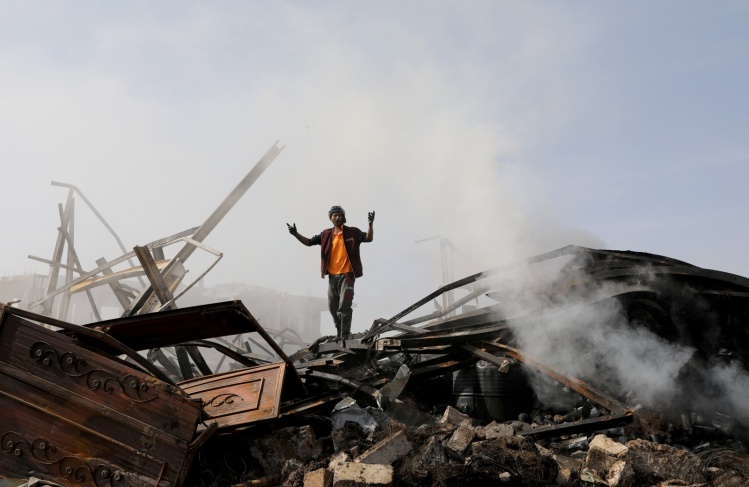 A worker reacts as he stands on the wreckage of a store hit by Saudi-led airstrikes in Sanaa, Yemen, July 2, 2020 (CNS photo/Khaled Abdullah, Reuters).

The civil war in Yemen is currently the world’s worst humanitarian catastrophe. A hundred thousand Yemenis have died, more than 8 million are displaced, and 80 percent of the population is on the brink of starvation. What began as an internal conflict in 2014 morphed into a complicated proxy war between the internationally recognized government in southern Yemen, backed by Saudi Arabia, and the Iranian-supported Houthi rebels in the north. The United States got involved when the Obama administration began providing military support to the pro-government coalition and sold weapons to Saudi Arabia, an arrangement that continued under former president Donald Trump. The United States provides two-thirds of the aircraft the Saudis use in Yemen. Equipped with American arms and aided by American advisers, the Saudis have waged a sustained and often indiscriminate bombardment of the Houthis. They have targeted schools, hospitals, factories, and weddings.

In early February, President Joe Biden signaled a new direction when he announced that the United States will end “offensive operations” in Yemen, freeze “relevant” arms sales to Saudi Arabia, and name a special envoy to Yemen to pursue a diplomatic solution. The United States will also lift the terrorist designation from the Houthis to allow more humanitarian aid to reach northern Yemen. This is a marked departure from Donald Trump who, overriding a congressional vote to end U.S. involvement in the war, increased military and intelligence support for Saudia Arabia. In the last twenty-four hours of his presidency, Trump completed another deal to send arms not only to the Saudis but also to the United Arab Emirates, which also belongs to the pro-government coalition. As a 2018 Commonweal editorial argued, Trump’s unwavering and mainly mercenary loyalty to the Saudis led him to overlook their human-rights abuses. Most notably, he covered up for the crown prince, Mohammed bin Salman, who likely orchestrated the brutal murder of Washington Post journalist Jamal Khashoggi in 2018 because of Khashoggi’s criticism of the regime, including its war in Yemen. (“I saved [bin Salman’s] ass,” Trump told journalist Bob Woodward in an interview. “I was able to get Congress to leave him alone.”)

The vagueness of these terms suggests the administration is leaving itself room to maintain U.S. involvement in the war.
sharetweet

The change in American posture and policy is long overdue, and welcome. Yet it’s still unclear just what it will amount to. For one thing, though the administration has promised to end “offensive operations,” the United States will continue to give Saudi Arabia defensive support. From the outset, Saudi Arabia has claimed that all its interventions in Yemen are defensive in nature; indeed, this was the grounds on which the Obama administration became involved in the first place. Also unclear is what qualifies as “relevant” arms sales. The vagueness of these terms suggests the administration is leaving itself room to maintain U.S. involvement in the war, perhaps in more or less the same manner as its predecessors.

That would be a mistake. Ending the catastrophe in Yemen means ending all military cooperation with the Saudis in Yemen and cutting off arms sales to the pro-government coalition. Now that the Houthis’ terrorist designation has been revoked, the United States can and should support humanitarian-relief efforts—not only in the desperately impoverished north, but throughout the country. Biden must also commit to negotiating a ceasefire and, through the new envoy, work to broker a peace deal between the Yemeni government and the Houthis. The suffering in Yemen has gone on for far too long. That the United States has helped cause so much of it should be a source of lasting shame. The Biden administration has the opportunity, and the obligation, to correct course.