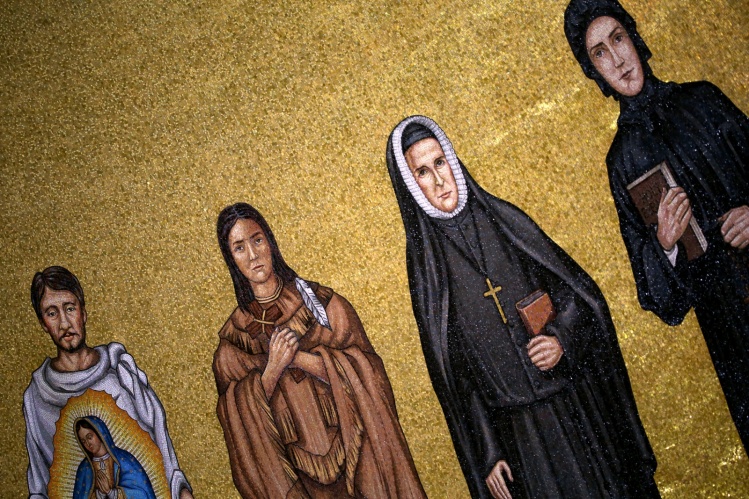 To get a spot on the Catholic Church’s official list of saints, a person needs more than a holy life. She needs witnesses to testify to that holiness, miracles attributable to her intercession, supporters who have the influence and the means to pursue her cause and see it through to completion. Good timing helps, too. As Kathleen Sprows Cummings writes in the introduction to her new book, “Canonization may be fundamentally about holiness, but it is never only about holiness.”

A Saint of Our Own is a deeply researched and absorbing history of what the process of declaring sainthood has been “about” for successive generations of American Catholics. “In the United States,” Cummings writes, the process of recognizing saints “has often been about the ways in which Catholics defined, defended, and celebrated their identities as Americans.” In tracing the major shifts in American Catholics’ self-image from the nineteenth century to the present, Cummings demonstrates how each saint’s path to canonization was affected by shifting political realities, power struggles in the hierarchy, and emerging awareness of feminism and racial justice. A great deal of social history is packed into this scholarly and readable book.

What did American Catholics need homegrown saints for, anyway? As immigrants swelled the population of the faithful, their answers to that question changed. The U.S. bishops of the 1880s, who petitioned Rome to open the causes of Kateri Tekakwitha, Isaac Jogues, and René Goupil, wanted an official affirmation of Catholicism’s status in a country Rome still considered mission territory. A few generations later, those missionary-era candidates were eclipsed by people like Mother Frances Cabrini and John Neumann, “saints who evoked transplantation of European Catholicism rather than the conversion of native people.” At the same time, America’s increasing significance on the global stage meant Catholics in the United States no longer saw themselves as outsiders in the institutional church; particularly after the World Wars, Americans felt they had earned respect and recognition from Rome.

It is, of course, difficult to say what “Catholics” in general thought or felt about saints, or anything else, at any given time. What makes Cummings’s book especially valuable is her attention to the influence that “both popular piety and structures of power” had on the histories of America’s would-be saints. Popular opinion is represented here by well-chosen quotations from publications (including this one) that captured, or attempted to influence, Catholic thought throughout the last two centuries.

A major theme in A Saint of Our Own is the role of women as both candidates and petitioners in the quest to establish American saints. As in her previous book, New Women of the Old Faith, Cummings lucidly traces “the complicated relationship between gender and power in the church and in the early twentieth century.” For instance, “until 1983,” Cummings writes, “canon law stipulated that women could petition the Holy See only through male proxies.” That meant “any women’s congregation proposing one of their own members for canonization…would need to have the case mediated by a man—and by a man selected by the Sacred Congregation, not by the sisters themselves.”

Seton’s journey to canonization was a long one, and in Cummings’s hands it is a fascinating study in the intersection of piety and power.
sharetweet

The implications of this are illustrated in the case of Elizabeth Ann Seton, the Revolutionary-era Episcopalian wife and mother who became the founder of the Catholic Sisters of Charity and the first native-born American to be canonized. Seton’s reputation for holiness was solid, but her cause had many complicating factors—including difficulty finding proof of her baptism in the records of New York City’s Trinity Church. It is hard to find a pioneering nun whose legacy was not challenged, at some point, by an officious priest or bishop; in Seton’s case the threat came decades after her death, when New York’s Archbishop John Hughes forced a split in the Sisters of Charity. Those two groups, one in New York and one in Maryland, grew and splintered into seven communities of sisters, all of whom traced their origins to Seton without necessarily being in relationship with each other.

The division may not have interfered with the sisters’ work, but it posed a problem for Seton’s chances at sainthood. Canonization “requires a single story, and Seton’s supporters would need to agree on one before her cause could succeed.” That process was complicated by the assignment of an egotistical vice-postulator, Vincentian priest Salvator Burgio, who had a habit of inflaming tensions among the congregations Seton had founded and whose interventions tended to create new obstacles in his candidate’s path. The sisters responded, as sisters so often have, by maneuvering around the patriarchy, forming their own alliance, called Mother Seton’s Daughters, to advance their founder’s cause.

Thus Seton’s journey to canonization was a long one, and in Cummings’s hands it is a fascinating study in the intersection of piety and power. As twentieth-century feminists argued for women’s independence, church leaders directed the faithful’s attention to Seton’s “contentment” in her roles as “sister, daughter, bride, and mother.” It takes some doing to portray as traditional and unambitious women like Seton, women who rose to prominence by creating their own paths, founding new movements, and resisting male control—but the church has always found a way.

Moving briskly through the twentieth century—Seton, after all, was not canonized until 1975—Cummings arrives at the Second Vatican Council and the long papacy of John Paul II as major epochs in the story of American saints. John Paul II oversaw changes to the canonization process that made it move more quickly, like requiring fewer miracles for beatification and canonization. He expanded the official roster of saints and blesseds, making it more global and diverse. He also, like all popes, had his own preferences, which boosted some candidates and left others behind. And he encountered some surprising resistance from congregations of women religious, who, after Vatican II called them to reexamine their founders’ vision, began to question whether supporting canonization was in line with that vision. Cummings is particularly keen in her analysis of what she calls a “systematic and decisive shift in U.S. saint-seeking: an aversion to formal canonization among sisters who reevaluated their ministries and relationships to the hierarchy in the aftermath of Vatican II.” The Society of the Sacred Heart, for example, stopped promoting the cause of Philippine Duchesne, a French sister who had devoted herself to mission work in North America, judging it “no longer justifiable in light of the congregation’s renewed commitment to the poor.” They determined that applying their resources to the work Duchesne had begun in the United States would do her memory more honor than pursuing her canonization.

By the time Seton became St. Elizabeth, many sisters had grown impatient (to put it mildly) with male domination and the obstacles it created. In light of Seton’s story alone, it is hard to argue with their decisions to redirect their energy. But Cummings warns that “in eschewing canonization processes, Catholic sisters who identify as feminists may be inadvertently ensuring that the holy women who lived among them will be lost to history.” Men, as this book shows, have often tried to shape the stories of holy women to narrow the boundaries of what female holiness can look like. Opting out of that process could make the real diversity of women’s witness even less visible.

Cummings writes perceptively about how, “by the last quarter of the twentieth century”—that is, about the time Seton was finally canonized—“the divisions among U.S. Catholics became much deeper than those that had once distanced them from Rome and from their fellow citizens.” Today there are many American candidates at various stages along the path to sainthood, but the idea of a single patron saint for the country’s Catholic faithful seems hopelessly quaint. Each “holy hero” can be used as an avatar in the intra-religious culture wars, helping Catholics stake out territory that excludes as well as inspires. Consider Dorothy Day, another woman of New York, and the uses to which her remarkable life of discipleship has been put. Look at how her witness has been defined, and how it has been narrowed, in the efforts both official and informal to promote her to St. Dorothy. As always, the quest for canonization is about much more than holiness. In the twenty-first century, the defining question may be what we mean when we say that a saint is “our own.”

A Saint of Our Own
How the Quest for a Holy Hero Helped Catholics Become American
Kathleen Sprows Cummings
The University of North Carolina Press, $28, 336 pp.