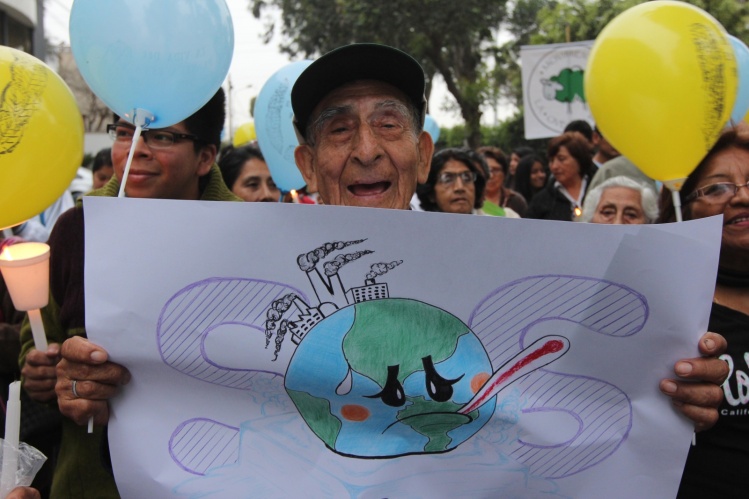 Pope Francis made this call to care for the earth in a homily early last month. In December, he made an even stronger appeal for environmental action. “There is a clear, definitive and ineluctable ethical impetrative to act,” he wrote in a message for the U.N. Convention on Climate Change. “The consequences of environmental changes…remind us of the gravity of negligence and inaction.”

Francis, whose much-anticipated encyclical on the environment will be released before this year’s U.N. climate change conference in Paris, isn’t alone in viewing faith and environmental justice as inherently linked. In a study last November, the Public Religion Research Institute (PRRI) found that 73 percent of Hispanic Catholics in the United States are “very” or “somewhat” concerned about climate change, higher than any other religious/ethic group in the study’s breakdown.

Such high levels of climate awareness do not extend to all American Catholics, however: Just 41 percent of white Catholics report climate change concern, lower than every religious group but Evangelical Christians. Is indifference consistent with church teaching? “The Catholic teaching on care for creation goes back to Genesis,” says Dan Misleh, executive director of the Catholic Climate Covenant, citing St. Francis and St. Thomas Aquinas, and the three most recent popes, as environmental advocates.

Misleh’s organization coordinates the Catholic Coalition on Climate Change, a network of thirteen organizations [.pdf] that includes the United States Council of Catholic Bishops (USCCB). The coalition teaches that all seven principles [.pdf] of Catholic social teaching support and inform a mindset of climate concern and activism.

“Catholic perspectives are distinct from that of other major stakeholders in this debate,” the coalition states. “An authentically Catholic response to climate change must be about both the care of creation and protection of those most vulnerable to climate impacts.” 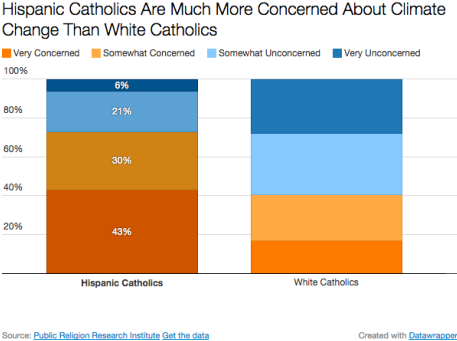 Perceived vulnerability to the impact of climate change may explain the level of concern expressed by Latinos. Close to half (43 percent) of Hispanic Catholics—higher than any other religious group—told PRRI they expect to experience personal, substantial harm from climate change. Only 13 percent of white Catholics said the same.

“Many Latinos work in construction jobs and agriculture, where air quality and heat are really big factors,” says Adrianna Quintero, executive director of Latino environmental advocacy group Voces Verdes. “When it comes to agriculture, they’re more exposed to pesticides and air pollutants…. You also have drought, which is a direct way that impacts whether or not they're able to work.”

Latinos are motivated by a “deep personal sense of our global interconnectedness,” Quintero has written, “not only to our family members who join us for dinner around the table every night, but for our extended network of cousins, aunts and grandparents whether they live here in the U.S. or abroad.” That could be why 86 percent of Latinos in the NRDC study cited a “moral duty” to preserve the planet for children and to respect ancestors’ legacy of care for the earth.

This climate concern translates into desire for action: 90 percent of Latinos told the NRDC the government should take action against climate change. And in another study, conducted by The New York Times last month, Hispanics showed higher levels of support for climate change action—such as greenhouse gas taxes or U.S.-funded initiatives in poorer countries—than non-Hispanics. The researchers suspect this support for action is partially driven [.pdf] by a “heightened level of perceived personal vulnerability to global warming.”

Latino Catholics are also more likely than any other religious group to say their congregation sponsors climate change-related activities, and that their clergy discuss the issue (white Catholics, unsurprisingly, hear the least about climate change in the pews). Those who hear climate change discussed frequently in sermons are 13 percent more likely to believe it is real and caused by human activity.

Quintero says when the NRDC uncovered high levels of Latino climate concern in its first poll on the topic, “It really confirmed what we suspected, which was that Latinos were a force to be reckoned with on environment.” She says it was clear the concern “went beyond just a fad. It’s something very culturally part of the Latino community.”

Will climate concern and action become a larger part of the wider church community? Pope Benedict XVI spoke frequently on climate change and environmental destruction, writing that “preservation of the environment, promotion of sustainable development and particular attention to climate change are matters of grave concern for the entire human family.” When Pope Francis was asked about climate change last month, he said: “I don't know if it [human activity] is the only cause, but mostly, in great part, it is man who has slapped nature in the face. We have, in a sense, taken over nature.”

Statements like these are encouraging to activists like Misleh. “I have great hopes for the encyclical,” he says. “I think it’s going to move the needle.”

Miami Archbishop Thomas Wenski spoke of the upcoming encyclical at a briefing on religion and climate change sponsored by the National Religious Partnership for the Environment (NRPE) in Washington, D.C., last month. He predicts the pope will discuss the “interrelatedness of the various social, economic, political, or environmental crises” faced by humans today.

The NRPE briefing aimed to educate and influence members of Congress. In January, the U.S. Senate voted down an amendment (fifty to forty-nine) acknowledging that “human activity significantly contributes to climate change,” thanks in part to a number of Catholic climate-denying officeholders.

“Bishops are not scientists,” Archbishop Wenski said at the briefing, turning climate deniers’ often-invoked “I’m not a scientist” plea of ignorance on its head. “But we are pastors—and in so far as climate change affects concrete human beings, it is a moral issue.”

His statement mirrors the sentiment of the USCCB, whose 2001 Global Climate Change: A Plea for Dialogue, Prudence, and the Common Good states: “We make no independent judgment on the plausibility of ‘global warming.’ Rather, we accept the consensus findings of so many scientists and the conclusions of the Intergovernmental Panel on Climate Change as a basis for continued research and prudent action.”

Both Misleh and Quintero hope to harness Latino climate concern into political action. Misleh’s Catholic Climate Covenant is working to “enfranchise the Hispanic Catholic population to influence legislators.” Quintero says the country’s changing demographics could make a Latino climate movement a powerful political force. “We need many voices. We need a multitude  of voices talking about it from their own perspectives.”

She says the reality of lower-income, globally minded Latino climate activists belies the stereotype of the “Prius-driving, Whole Foods-shopping” environmentalist. “If we really look at environmentalism as a value—and I think this is where religion really comes in—if you look at the fact that protecting our surroundings will determine a lot of how our children will live, then you can really start to understand why this is such an important issue for the Latino community.

“It’s not a political issue for Latinos. It’s a values issue.”

Katie Rose Quandt is a reporter for BillMoyers.com. Her work has appeared in Mother Jones, America, and In These Times.