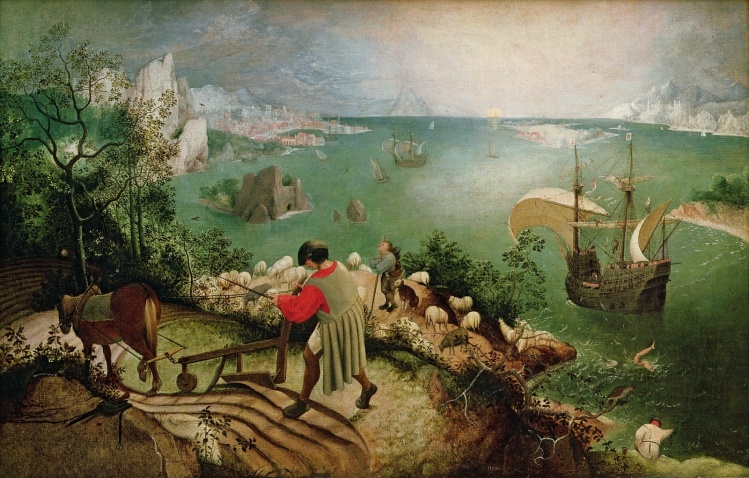 Joseph Leo Koerner is as likely to quote W. H. Auden or Franz Kafka, or even to point out relevant themes in films such as The Truman Show and The Matrix, as he is to refer to a distinguished critic when discussing art. The extensive notes following the text of Bosch & Bruegel: From Enemy Painting to Everyday Life show he is prodigiously knowledgeable in art history and criticism, but Koerner nevertheless wants “to communicate to a general public the achievements of two great painters of everyday life. Non-experts are an ideal audience for this, since with everyday life everyone is an expert.”

Despite some sections that include too much philosophical jargon (“Although compendious, this is world as lifeworld—not the world’s totality, but that totality looked at from the ‘how’ of its experience by one who lives in it”), which sometimes makes it a slog to read, Koerner succeeds in elucidating for the common reader “how a new form of painting devoted to ordinary life could begin with something altogether unordinary: a metaphysical struggle, waged through the medium of painted images, against the Old Enemy, Satan.”

Hieronymus Bosch—he of the “metaphysical struggle”—was born around 1450 and died in 1516. He was from Aachen, a West German city near the borders of Belgium and the Netherlands. Although he most often painted “works of a traditional kind,” he became best known for paintings that showed scenes of hell and the tortures of the damned. With Bruegel the Elder, who was born four years after Bosch’s death and lived until 1569, the opposite was the case; in the beginning of his career in Antwerp, he imitated Bosch’s monstrous creations, but then developed his own vision centered not on metaphysical struggle, but on, as Koerner calls it, “everyday” life.

What united the two painters, besides their common culture, popularity, and surfeit of wealthy patrons, was that both liked to paint scenes that gave a bird’s-eye view. Bosch began this process with “a species of painting that seeks to encompass, from an impossibly elevated perspective, earth’s entire geographic reach.” This became its own genre as Flemish landscape painters used the same techniques for views of nature. Bruegel then, according to Koerner, gave “new life” to this transformation.

But why did Bosch tend toward the religious and Bruegel to the naturalistic? The answer, Koerner suggests, lies in the history of the religious wars of the sixteenth century, when the Spanish tried to keep the Netherlands region within the Catholic fold, a conflict Goethe dramatized in his play Egmont (1788). In other words, what we now call secularization began to unfold, however falteringly, and Bruegel’s art turned earthward because Northern Europe was exhausted by, though not done with, killing in God’s name.

Because of this secularization, the nature of art changed:

During the sixteenth century, products of a new kind streamed forth from the painters’ workshops of Northern Europe. These were autonomous paintings, framed panels and canvases with no purpose other than to be beheld. All that they achieved—their pleasures, messages, temptations, and warnings—they did by what they independently displayed. Today this seems the art of painting’s natural state. But it was not so at the time. Until 1500, painting had largely been in the service of religion.

Ironically, this secularization was not just an anti-religious phenomenon; it was also a product of religion itself: the reformers wanted to smash all the “idols,” while the counter-reformers examined all new works of art for signs of heresy.

Secularization was not just an anti-religious phenomenon; it was also a product of religion itself
sharetweet

After examining the resonances between the work of Bosch and Bruegel, a “rhetorical commonplace” in their time, Koerner explains in detail many of Bosch’s paintings and drawings. “Bosch,” Koerner writes, “was an expert in enmity. Hatred was his professional specialty.” Where did all this enmity come from? Again, the answer is history:

In the Judeo-Christian tradition, history was often written as a victim’s chronicle. The suffering Christ took over the position of Israel surrounded by its enemies. In certain periods, and dramatically during the two centuries leading up to the Reformation, this sense of being engulfed by foes grew especially acute. The outbreak of plague in Europe caused its traumatized survivors to hunt for secret perpetrators. Paradoxically, it was the oppressed outsiders—the Jews and the lepers—who were persecuted as insiders of a genocidal plot.

Koerner’s solid historical sources for this paragraph affirm René Girard’s theologically informed anthropology, with its idea of Satan personifying the human urge to find a scapegoat—that is, evil hiding behind the idea of doing good, and ridding the community of the evil afflicting it. In this way, we can see how Bosch’s paintings of the enemy become, in Koerner’s words, “enemy” paintings in which “the symbolism of evil becomes an evil symbolism.”

Bosch made evil portraits that lured the viewer into a fascination with evil.
sharetweet

In other words, in portraying evil, Bosch made evil portraits that lured the viewer into a fascination with evil. This can be seen most clearly in a triptych Bosch painted for a nobleman known for having a bed big enough to fit fifty people. He would encourage his guests to get drunk enough to pass out, then would toss them onto the bed to see what would happen. This triptych, The Garden of Earthly Delights (1503–1515), portrays in its central panel—traditionally the spiritual locus of a triptych—a world of sensual delights: the Garden of Eden on the left panel, hell and its torturers on the right. “He [Bosch] engineered it,” Koerner writes, “to look like the idol of some unspeakable cult,” making us, the viewers, “into the enemy.”

It is a relief when Koerner turns from Bosch to Bruegel. Focusing on the recurring historical, cultural, and natural themes in Bruegel’s works, Koerner shows how the painter, fascinated by the natural world and village life even when portraying “grand subjects,” made “the first monumental paintings of everyday life.”

An example of the first kind of painting is The Hunters in the Snow (Winter) (1565), which shows two hunters with their dogs tromping through the outskirts of a village and looking down over a winterscape of snow-covered houses, bridges, and frozen lakes dotted by skaters. Koerner: “With no finger-wagging inscriptions or allegorical machinery, through the mere resources of blank white paint, Bruegel shows home and the human form from the indifferent perspective of the world.”

As to paintings that portray grand subjects from an “ordinary point of view,” there is Landscape with the Fall of Icarus (1558), which shows the moment, in the myth of Daedalus and Icarus, when Icarus, having flown too close to the sun with his waxed wings, is just entering the sea, with only his legs showing. As Auden wrote:

In Brueghel’s Icarus, for instance: how everything turns away
Quite leisurely from the disaster; the ploughman may
Have heard the splash, the forsaken cry,
But for him it was not an important failure; the sun shone
As it had to on the white legs disappearing into the green
Water; and the expansive delicate ship that must have seen
Something amazing, a boy falling out of the sky,
Had somewhere to get to and sailed calmly on.

Those tempted or even terrified by Bosch’s work but elevated, in a quiet, incarnational way by Bruegel’s, will now be able to fathom why and how by spending some time with Koerner’s Bosch & Bruegel.