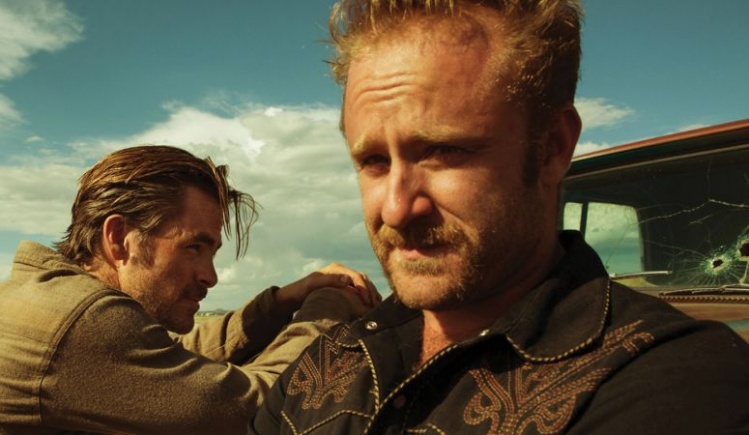 Is it really possible I’ve never reviewed a western? A check down the list of roughly two hundred movies discussed in these pages over the years, and sorry pardner, not a single one among them.

What accounts for this glaring gap in my résumé? To be sure, I have some favorite westerns. Sergio Leone’s The Good, the Bad, and the Ugly, for its operatic stylizations; High Noon for the perfection of its form; Red River for its sheer mythic majesty. Yet many classics of the genre either left me cold (Shane) or eluded me despite obvious virtues (The Searchers) or actively annoyed me (Little Big Man). Maybe it was a preference, in my formative cinematic years, for contemporary settings over historical ones. Maybe my teen aversion to John Wayne. Maybe my instinctive mistrust of horses.

At any rate, the westerns I’ve liked tend to be ones like Unforgiven and The Man Who Shot Liberty Valance, whose revisionist impulses critiqued or subverted the myths of the western; or those that spoofed the genre (Blazing Saddles); or turned it into playful fun (Butch Cassidy and the Sundance Kid) or trenchant political commentary (Lonely Are the Brave). Then there are the many terrific movies that are disguised westerns, like Assault on Precinct 13, Thunderbolt and Lightfoot, Thelma and Louise, or the Star Wars series—films that take the deep motifs of the genre and deploy them far afield.

Hell or High Water lies somewhere in between, a contemporary western bent on playing around with the genre even as it draws us into a taut drama. There are robbers here, and wide-open Western spaces, and a craggy lawman in relentless pursuit...but the time frame is now, and the setting not the stone monuments and sandy reaches of John Ford’s deserts, but the closed-down businesses and weed-strewn lots of post-2008 rural Texas. And instead of a posse of citizens on horseback, we have armed men in SUVs, and a plethora of concealed-carry citizens looking to turn the stand-your-ground ethic of the Lone Star state into instant heroism.

Directed by British filmmaker David Mackenzie and scripted by Taylor Sheridan, who wrote the snappy Tex-Mex drug-war saga Sicario, the film follows the exploits of two bank-robbing brothers, Toby and Tanner Howard. Their heists are no mere spree, however, but tactical raids on one specific bank that is foreclosing on their family’s farm. The brothers’ genial plan—to pay the bank’s own money back to it, ward off foreclosure, and then be, as the squirrely lawyer they consult tells them, “free and clear”—reflects the sly way Sheridan’s script joins legal-financial terminology to themes of flight, moral reckoning, the frontier, and the eternal American dream of freedom.

Standing in the brothers’ way are a pair of Texas Rangers, the gray-maned, mustachioed Marcus Hamilton (Jeff Bridges) and his younger partner, Alberto Parker (Gil Birmingham). It’s not exactly novel, the story of the aging investigator, widowed, alone, and being pushed into retirement, submerging himself obsessively in a case, and the setup is embroidered with well-worn dialogue. “You may get to have some fun before they send you off to the rocking chair,” Alberto teases Marcus. And Marcus: “Yep, I may have one hunt left in me.”

Yet Hell or High Water takes these familiar materials and breathes new life into them. It deals out anachronistic juxtapositions (a guy in spurs mounts a horse next to a lime-green muscle car parked at a convenience store) while casually de-romanticizing the iconic figures of the western. In one scene, as the two Rangers pursue the brothers, they’re stopped in their vehicle by real cowboys herding a mob of unruly cattle across the road, away from a raging grass fire. It’s hard work, with not much profit in it, and surely no glory. “No wonder my kids don’t want to do this shit,” one cowboy complains to Marcus, brimming over with boredom, disgust, and self-pity.

The film is terse and low-key, with unexpected comic flourishes. There’s the camaraderie of Marcus and his half Native-American partner Alberto—a modern-day Lone Ranger and Tonto, crisscrossing the Texas hill country and passing the long hours with affectionate jousting. “That’s white man’s intuition!” hoots Marcus when an investigative hunch turns out to be right. And Alberto, muttering: “Even a blind pig can find a truffle every now and then.” Minor characters exude a Texas-toughened, seen-it-all durability (“Y’all are new at this, I’m guessin’,” remarks an unperturbed female bank employee, wryly observing the Howard brothers’ ham-fistedness during their first heist). Sitting down to lunch at a steakhouse, the two lawmen are reamed out by a wizened waitress who hollers at them for daring to order anything other than steak, a virtuoso riff of gratuitous meanness that leaves them speechless.

McKenzie and Sheridan give us characters who confound easy judgment. There are no villains here, unless it is the faceless cadre of remote corporate titans who run the banks that are taking people’s homes. “Three tours in Iraq and no bailout for people like us,” reads a bitter scrawl on the side of a building. These are hardscrabble precincts percolating with so much resentment that old guys in a diner chortle when a bank across the street is robbed. “Y’all been here for a while?” Marcus asks one of them. “Long enough to watch a bank get robbed that’s been robbing me for thirty years,” the man answers. This Robin Hood populism grounds the Howard brothers’ mission in a steely resolve. “I’ve been poor all my life, and my father was before me,” says Toby. “But not my sons.”

As types, the brothers pair nicely, one a pure extrovert, whooping his way through life, the other all inwardness, silence, and worry. Their aptly styled personalities lend the bromance a pleasing shape, and inform several affecting moments of sibling tenderness; in one, these two toughest of men revert to boyhood play, wrestling in the yard at sunset. As Tanner, Ben Foster vaguely resembles a lighter-haired, handsomer Eli Wallach in the Sergio Leone classic; and Chris Pine as Toby radiates worried intensity, his burning blue eyes locked in a perpetual thousand-yard stare.

And, once again, there’s a casually marvelous Jeff Bridges performance. Over almost (gulp) half a century, the actor has evolved from the baby-faced golden boy of The Last Picture Show, through middle-aged roles involving damaging intensity (Door in the Floor) or insanity and evil (Jagged Edge, The Vanishing), and finally to the grizzled old coot of Crazy Heart and the current film. He’s a superb physical actor, and in his movements as Marcus we see the challenge of doing a young man’s job with an older man’s body: the effort, the sweating; the aches and the grunts. As Bridges has aged, that callow quality has receded; his career-long habit of leaving his mouth slightly open in an attitude of distracted thoughtfulness has morphed into a perfect geezer action, and he has developed reserves of reflectiveness and regret. These traits suit him well to a film intent on showing an older protagonist the uncomfortable look ahead. “Isn’t it getting a bit late for you?” Alberto asks, as Marcus watches TV at the hotel where they’re spending the night near the bank they’re staking out. “Yeah,” Bridges mutters, with a sudden brooding wince.

Hell or High Water is well put together, right down to the soundtrack, which alternates country favorites like Johnny Cash with interludes of mournful fiddle music. One reviewer called the movie “a feature-length Nebraska-era Bruce Springsteen song,” and that seems just right for describing the tenderness, sympathy, violence, brokenness, and themes of social justice it captures. With all that comes a certain grim fatalism. When Tanner impulsively robs a bank they haven’t even cased, Toby—whose plan all along has been to get the money they need and then stop—is both frightened and enraged. How are they supposed to get away with it if Tanner is going to do stuff like that? he asks his older brother.

Tanner falls silent, thoughtful for once. “I never met nobody who got away with anything, ever,” he says, quietly. “Did you?”