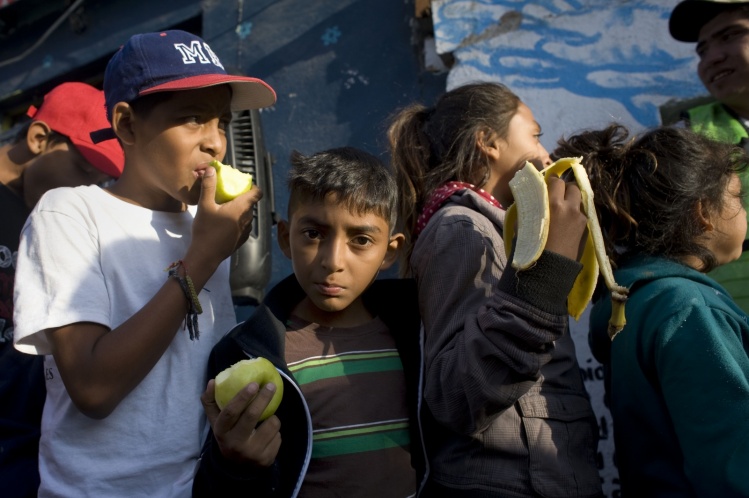 Children at a shelter in Tijuana, Mexico (CNS photo/David Maung)

Rhetorical excess and cartoonish depictions of ideological foes seem like inescapable parts of our political life today. Nuanced analysis, soberly delivered, can feel antiquated and doomed to irrelevance. I’ve pushed the outrage button more than a few times myself since Donald Trump’s election. An administration that scoffs at corruption, stokes the flames of nativism, emboldens white supremacists, and struts around with authoritarian arrogance provides ample material for any writer who is horrified by it all. How to avoid outrage fatigue is a real question. Even so, what causes the outrage—degrading language and cruel policies that demean human dignity—can’t be ignored.

Clearly and honestly describing what we’re watching unfold without sensationalism or melodrama is a daily challenge. But words matter, not least because Trump has weaponized language in ways that are both shameful and skillfully demagogic. The controversy over Trump’s use of the word “animals” to describe undocumented immigrants is a telling example. While the president claims he was speaking about gang members, not all immigrants, he knows exactly what he’s doing. “Whether he’s talking about Latino immigrants or kneeling African American football players, President Trump has a consistent way of disguising his racism, bigotry, and dehumanization while dog-whistling it out to those voters who he believes may thrill to it,” Greg Sargent wrote in the Washington Post. “The game is always that Trump fluidly conflates one set of individuals who constitute a less sympathetic target—one he ostensibly goes after, and one that is harder to defend—with the broader group he’s actually trying to belittle or dehumanize but cannot do so overtly.”

Evil is a word that should not be tossed around too easily or quickly. But in the case of what is now happening at the border, it’s the appropriate word.
sharetweet

This takes us to the latest, well, outrage, over the Trump administration’s decision to separate immigrant families at the border. The number of migrant children held in U.S. government custody without their parents has surged 21 percent in just the past month, according to government figures. This is the result of a “zero tolerance” approach adopted last month by Attorney General Jeff Sessions and Homeland Security Secretary Kirstjen Nielsen. Anyone who comes across the border illegally, including asylum seekers, now faces criminal prosecution. Parents who arrive at the border with children are sent to federal jails while their children are housed in shelters, often many miles away. With the Department of Health and Human Services (HHS) reporting that 10,773 migrant children are now in its custody, those shelters have become so crowded that HHS is exploring the possibility of holding them on military bases. Daniel Flores, the Catholic bishop of Brownsville, Texas, responded this week:

Separating immigrant parents and children as a supposed deterrent to immigration is a cruel and reprehensible policy. Children are not instruments of deterrence, they are children. A government that thinks any means is suitable to achieve an end cannot secure justice for anyone.

Unacceptable treatment also happened under President Obama’s watch. Documents obtained by the American Civil Liberties Union, which is filing a class-action lawsuit against the administration, show pervasive abuse and neglect of unaccompanied immigrant children detained by U.S. Customs and Border Protection. The report, based on over thirty thousand pages of documents from 2009 and 2014 obtained by a Freedom of Information Act lawsuit, details cases involving federal officials’ verbal, physical, and sexual abuse of migrant children; the denial of clean drinking water and adequate food; failure to provide necessary care; detention in freezing, unsanitary conditions; and other violations of federal law and policy and international law.

Still, it’s clear that the Trump administration has given the green light to more extreme immigration measures than most recent presidents, in part by making few distinctions between violent undocumented criminals, and the vast majority of undocumented people who are serving their communities and contributing to the country.

What does it do to families when infants and toddlers are separated from their parents? Evil is a word that should not be tossed around too easily or quickly. But in the case of what is now happening at the border, it’s the appropriate word. The traumatic impact on children, according to evidence obtained in government documents and the expertise of psychologists, is a form of torture. Jaana Juvonen and Jennifer Silvers, two UCLA professors, recently explained why:

Children arriving at the U.S. border in search of asylum are frequently a particularly vulnerable population. In many cases fleeing violence and persecution, they also encounter hunger, illness, and threats of physical harm along their hazardous journey to the border. This combination of experiences puts migrant children at high risk for post-traumatic stress disorder and depression. Such anxiety and mood disorders can be debilitating and intractable, particularly when they start in childhood. By the time many migrant children arrive in the United States, they have already faced harrowing events, increasing the likelihood that they’ll be traumatized by parental separation…. The practice of separating families at the border is morally reprehensible—and based on science—goes against international and U.S. law, because the suffering it inflicts constitutes torture of children.

Jessica Henderson Daniel, president of the American Psychological Association, agrees. In a statement, she said that the Trump administration’s policy of separating children from their families is “not only needless and cruel, it threatens the mental and physical health of both the children and their caregivers.”

This kind of treatment deserves to be called evil and named as torture. It defaces the image of God all of us bear. It traumatizes and terrorizes. If outrage alone isn’t enough to undo such cruel policies, it remains the indispensable starting point for effective resistance.