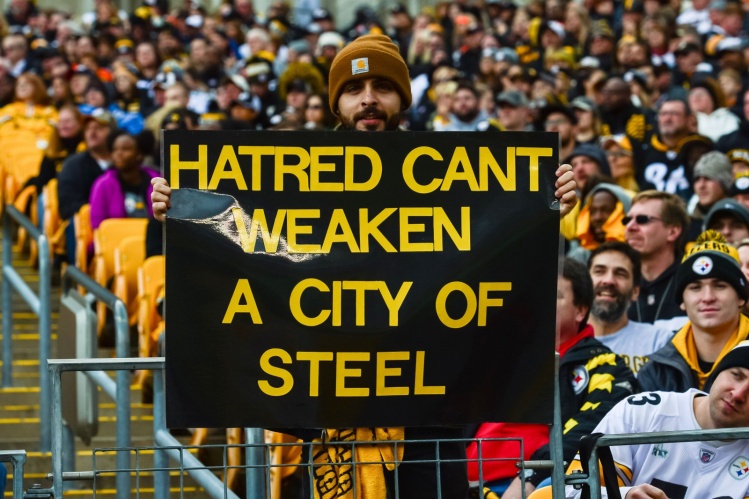 A Pittsburgh Steelers fan honors the victims of the shooting at the Tree of Life Synagogue (CNS photo/Jeffrey Becker, USA TODAY Sports via Reuters)

The other day, I listened to a local talk-radio host here in Connecticut criticize liberals for urging social-media providers to scrub hate speech from their sites. “Is it really better to bury this kind of thing where it will fester?” the host asked. He personally took a free-market approach, he went on. “Speech is really no different from anything else on the market. Let them put their ideas out there, and see how many takers there are.”

The problem is that there are a great many takers for hate speech in the United States right now; and purveyors of it have access, via social media and the internet, to large audiences. An informative article in the Times looks at how the Pittsburgh synagogue shooter, Robert Bowers, used a social media site called Gab. Gab was created by Andrew Torba, a Silicon Valley techie who disliked what he saw as the liberal unanimity of opinion around him. He decided, as he announced two years ago, to start a site that would foster “open, honest, and authentic discourse on the Internet.” Quoting Euripides and Tommy Smothers, the American comedian (of the famed “Smothers Brothers”), Torba set down a series of principles, beginning with this distinctly libertarian one: “Gab will empower users to mute and remove unwanted followers, words, phrases, and topics they don’t want to see in their feeds. Self-curation is the only true form of individual liberty and free speech online in an era of corporate-sponsored, politically manipulated, and ever-changing algorithms that are driving our social feeds.”

Gab, in other words, did not set out to be a meeting place for white supremacists. But as the Times explains, the site’s “intentionally slim rule book”—which does not ban hate speech—“attracted a crowd of extremists” such as the ex-Breitbart provocateur, Milo Yiannopoulos, and Richard Spencer, the white nationalist. As other platforms began to evict them, they migrated to freer pastures, and Gab became “a last refuge for internet scoundrels—a place where those with views considered too toxic for the mainstream could congregate.” Last January, Robert Bowers signed up. His Gab bio featured the assertion that “Jews are the children of Satan,” and his profile photo included the number 1488, a cryptic reference to Nazism. Hours before Bowers took his guns and went to commit mass murder at the synagogue, he announced his plan on Gab with an ominous “I’m going in.”

One key problem with the “marketplace of ideas” model, then, is that niche markets specializing in hateful ideas can and do flourish online. And in the egalitarian architecture of the web, the hate they purvey is not relegated to some hard-to-reach location, but is readily available to anyone, just a mouse-click or finger-swipe away. A thornier problem with the marketplace metaphor is this: What if the process by which hateful views are aired and inspected is not a salutary sorting-out of ideas in the civic square, but a pollution of that square?

It’s worth noting that free-speech policies, even among Western democracies, vary significantly. Germany decided, in the aftermath of Fascism, that hate speech—specifically Nazi ideas, slogans, and images—was too toxic, and banned it. Here in the U.S., the default bias is toward maximizing speech freedoms. What then to do about the kind of speech exemplified in “Jews are the children of Satan”? And who should do it? The social-media giants, slow to act at first, have recently become more aggressive. Soon after the shooting in Pittsburgh, Gab’s web-hosting provider (Joyent) dropped it, as did app stores, the domain-name provider GoDaddy, the payment-processing platform Stripe, and PayPal. A PayPal spokesperson vowed that the company would continue to take “immediate and decisive action” against any site “allowing the perpetuation of hate, violence, or discriminatory intolerance.” As I write this, the Gab website remains down.

From a progressive perspective, who wouldn’t cheer when one less hate site is free to pollute the civic square? And yet do we want free-speech decisions left to corporate entities acting to protect their business interests? It’s true that in the era of Black Lives Matter and #MeToo, those interests often run in tandem with progressive views. But what happens when they don’t?  We may feel fine about social-media companies banning Alex Jones or Gab. But would we have wanted Twitter to ban Malcolm X? Angela Davis? Lenny Bruce?

The case of Alex Jones is worth pausing over. Jones has made a cottage industry of peddling repulsive conspiratorial lies, the worst of which is that the killings of children at Sandy Hook was a government hoax, and no children really died. The way in which Jones’s outrageous falsehoods (another is the notorious Pizzagate conspiracy theory) became settled truth in a substantial swath of birther-inspired right-wingers says a lot about the obdurate nature of misinformation in today’s political climate—and the resulting dilemmas for free-speech defenders.

My interaction with a family member who’s a Trump enthusiast sheds light on the dynamic. He and I like each other, and generally avoid politics. But last summer, when Jones was banned from Twitter, I saw that my relative had gone online to cheerlead for the Infowars host, and I angrily emailed him. I pointed to specific quotations, like Jones’s assertion that the shooting had been orchestrated by the Obama administration. “Fake news!” my relative insisted.

Despite our lengthy-back-and-forth, my family member never truly and fully acknowledged that Jones propagated this toxicity, or that it subsequently inspired some of his listeners to harass the parents of the murdered kids in the most grotesque way. Pressed, he responded that he wasn’t “bothered” by the Sandy Hook lie, since “Jones is all over the map on any attack or similar event, spewing out all sorts of conjectures.” (Surely a dire sign of how Donald Trump has lowered the bar for public discourse—it’s OK to demagogue any one topic as long as you demagogue all topics!) I should be happy, my relative said finally, “that gatekeepers who also dislike Mr. Jones have kicked his bloviating self off of several major media platforms.”

Yet it isn’t that simple. The social-media giants are private companies, and in theory have the right to determine who gets to use their products; yet taken together they possess a near monopoly on access to the popular conversation. Do we feel comfortable giving Twitter and Facebook that gatekeeping function? What about Google, with its virtual monopoly on information itself? If Google decides to disappear a story, it will be as if it never existed.

While I find Jones reprehensible and damaging, that doesn't necessarily mean I want him banished from the public square, either by government or by corporations. I just want him to be reviled, by citizens freely seeing his hate speech for what it is, and rejecting it. But what if they don’t, or won’t? It’s also becoming amply clear that malicious foreign meddlers are using social media to undermine our elections through subversion and propaganda. So some policing is in order. But how much? And by whom? Who is to judge what airing of speech cleanses and what pollutes? Even the metaphor seems dangerous, in a slippery-slope way. Yet the dreck piles up. This week Connecticut was roiled by a blatantly anti-Semitic campaign ad in which a Jewish candidate for state Senate was shown clutching $50 bills—his face digitally altered to resemble the caricatures of greedy Jews that figured prominently in Nazi propaganda. Is that the kind of “speech” that should be put on offer in the marketplace of ideas? When “self-curation” fails to curb racist hate speech in deep-blue Connecticut, what hope is there for it anywhere?

I used to believe that such vile views and the individuals who hold them were a tiny fringe phenomenon in this country. But can anyone confidently say that now?
sharetweet

And so traditional liberals (like me) are feeling squeezed: on the right by the increasing prevalence of hateful speech, emanating from nationalists and white supremacists and seeping back toward the mainstream; and on the left, by illiberal speech codes on college campuses, which stridently insist on policing safe spaces and issuing trigger warnings. Our President is not helping. There was his notorious comment, after the neo-Nazi actions in Charlottesville, about “good people” on both sides. Now we have his insistent characterization of our country being “invaded” by a wave of Latinos on our southern border. Such purposefully inflammatory language is intended to whip up xenophobic fervor as the midterm elections approach. More dangerous, however, is how it creates a rhetorical and conceptual bridge from the mainstream to the far right, with its frankly racist worldview.

Bowers’s rantings before he committed mass murder in the synagogue connects these dark themes with chilling clarity. It was his view that Jews are the evil geniuses facilitating the current Latino “invasion,” in order to effect the “genocide” of white people. White supremacists have grotesquely co-opted the word, genocide, to refer to the evolving demographics of the United States. The idea is that once white Americans have been demographically “replaced,” Jews—who orchestrated the replacement—will run the country, with the black and brown hordes as their puppets. Thus the racist chant, in Charlottesville: “Jews will not replace us!”

I used to believe that such vile views and the individuals who hold them were a tiny fringe phenomenon in this country. But can anyone confidently say that now? The New York Times recently reported on how a network of nationalists have deployed anti-Semitic imagery to depict George Soros as the leader of an international cabal. And here is a scary article detailing the tsunami of anti-Semitic images and videos uploaded to Instagram in the days following the shooting at the synagogue: 12,000 posts invoking Hitler and Nazi ideology, charging Jews with orchestrating 9/11, and so on. Jonathan Greenblatt, head of the Anti-Defamation League, notes that social media companies have enabled extremists to move from the margins to the mainstream. “In the past, they couldn’t find audiences for their poison. Now, with a click or a post or a tweet, they can spread their ideas with a velocity we’ve never seen before.”

And in places where we haven’t seen them before. Let’s recall that Instagram was created as a site for people to share photos of food, pets, kids, and beautiful vacation spots. Now, via an insidious migration of ugliness, it has become a platform for hateful posts and videos.

There is an ineluctable downward drift to the public conversation online; the marketplace of speech and ideas has been swamped with garbage; we are suffocating in awfulness. What we need, desperately, is uplift, and we need it from our leader.  But given the cascade of falsehood, divisiveness and belligerence that flows uninterruptedly from the White House, I’m afraid that’s the last thing we can hope for.