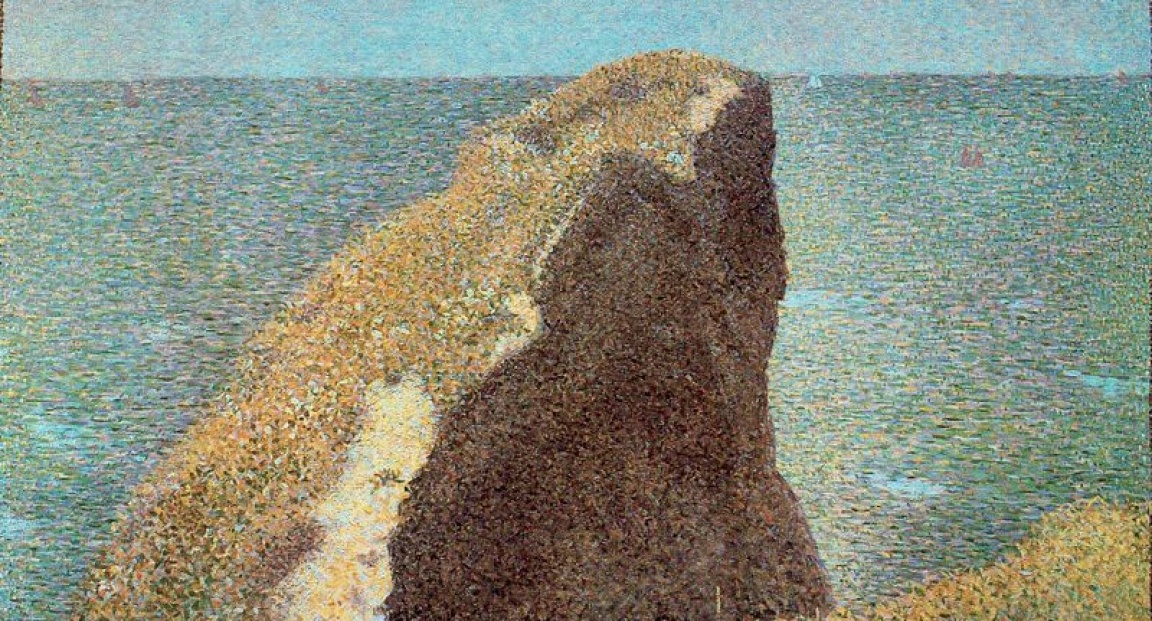 My boarding school kept a piano in the chapel. The designated practice rooms were a ten-minute walk from my dorm—too far on cold nights. So I’d head down to the basement chapel, open the lid to the Yamaha upright, and watch my fingers at work in its glossy black reflection. I was never very good at the piano. But I could shut my eyes, let time collapse, and when the chords finally resolved (or didn’t), I’d unsqueeze my eyelids and find a white patch of light hanging in my field of vision—a blind spot whose brightness stung. It once took a full five minutes to go away.

When I first saw the trace of light hanging beside me, I wondered whether it was God, come to keep me company. I was old enough to know that my eyes, held shut for a minute or so, could have produced that patch of light all by themselves. I was old enough to doubt that the prayer-book prayers I was learning to say in that chapel held any effective power beyond the aesthetic. I was old enough to find friends’ rejection of religion more persuasive than any endorsement of it I’d encountered. And yet the thought—never a certainty—that I’d just glimpsed God, stays with me, even more than the memory of the light itself.

Of course, I shouldn’t credit that piano for my being a Christian. Demographics must have played a more significant role. Had I been born in Morocco (99.8 percent Muslim) or Bangladesh (0.03 percent Christian), I doubt I’d spend much time thinking about Jesus. Nor, presumably, would the cadences of the Book of Common Prayer have lured me into becoming an Episcopalian. It’s far more likely that a Bangladeshi me would have lived and died without knowing, or caring, that this ever-shrinking denomination even existed. Why should he?

The New York City of my childhood was not exactly a hotbed of faith. But my mother was the superintendent of our church’s Sunday school, and when she told me that I could fold my hands, bow my head, and speak to God, I believed her. Most days, I still do.

“If you think so much of your religion is bullshit,” she asks, “why are you studying to become a priest?” We’d gone around the table, making the usual wedding-reception introductions, and my answer to “And what do you do?” had caused the biochemist and her husband, an environmental lawyer, to perk up. I’d explained that I was in divinity school with a year to go before I’d be ordained in the Episcopal Church. Polite follow-up questions let me add that I’d been a teacher for eight years before going to seminary, that I missed the classroom and wanted to work in schools again, that I might be too irreverent to be an effective priest: “A high tolerance for bullshit seems to be a prerequisite for a life in the church.” Church folks, at least the ones I hang out with, aren’t offended when I complain about all the bullshit you find in religion. They confront it every Sunday and so know its peculiar stench: the noxiousness of smug certainty, the obsession with the niceties of ritual. No, it’s the atheists that my blasphemy outrages.

“I mean, do you even believe in God?” the biochemist asks.

I reply, to no one’s satisfaction, that it depends on what she means by God.

I reply, to no one’s satisfaction, that it depends on what she means by God.
sharetweet

Imagine a Seurat painting: a hundred thousand pointillist dots, layered thickly and with utmost care on a vast canvas. Hang the piece on a massive wall, and each tiny splotch of paint will cohere into a larger image, a unified whole. But shrink the room in your mind’s eye till it becomes no more than a narrow hallway, and you’ll never have the distance for a good view. What can you see this close? Nothing but individual dots, resolutely independent. You can press your back against the wall and crane your neck, fighting the room for a vantage that will let the points blend into something recognizable. You won’t find it.

No individual dot tells an honest story. Stand a nose-length away from the canvas. Smell the trace of turpentine. Then pick a dot: a smudge of pink, say, suggestive of skin or coral or sunlight skimming the lake—or stare at the tar-blue knife nick whose sheer edge makes you flinch. By itself, what can this one dot possibly disclose about its larger purpose?

The medieval theologian Meister Eckhart died before the Inquisition investigating his writings could denounce them as heretical. His death didn’t stop the pope from publishing a bull condemning lines the Dominican monk had written—quotations lifted in part from the poetic sermons he preached to a community of Beguine women. The papal bull existed to rid innocent minds of a corrupting influence and to erase Eckhart from Christian consciousness. But it’s thanks to that document that some of his lines managed to survive centuries of obscurity. You can burn a heretic and his books. A pope’s declaration of heresy, however, gets filed away safely in a library.

Among Eckhart’s offending statements preserved in the bull is this: “Anyone who blasphemes God himself praises God.”

Eckhart was baffled by the accusations of heresy leveled against him. He understood that some of his sentences might strike listeners as unusual, unorthodox even, but that was clearly his intent. His sermons deploy lines designed to shock listeners out of their complacent ways of thinking and talking about God. Statements that seem puzzling or blasphemous can knock us off balance until we regain our footing on firmer ground. So Eckhart wrote head-scratchers—because when we’ve stopped scratching our heads, we’ve stopped searching for God.

The mistake Eckhart made was trusting that his provocative statements would remain planted in their original context. Instead, statements that worked in tandem were broken apart like a pair of scissors, and each blade looked less like half of a tool and more like a dagger. In context, all Eckhart’s statements claiming knowledge of God (“the eye in which I see God is the same eye in which God sees me”) come with a companion statement claiming the opposite (“the one thing I know about God is that I do not know him”). Examining only part of a carefully balanced contradiction is bound to get Eckhart’s meaning wrong. God’s ineffability demands a creative use of language, and Eckhart responded with paradox and poetry, with words that sought to point beyond themselves to God.

Knotty ideas rub against one another in apparent contradiction. A preacher’s opaque abstractions relax into poetic lyricism of startling clarity. Dots on a canvas communicate with one another across whatever space divides them, hallowing the gaps.

What about your religion doesn’t feel like bullshit?
sharetweet

“What about your religion doesn’t feel like bullshit?” another lawyer at the table asks.  He tells me the only authentic religious impulse he’s ever felt came from reading The Varieties of Religious Experience by William James.

I’m standing powerless in a hospital as my four-pound daughter, born with a broken esophagus, disappears behind the heavy doors of the surgical wing. Terror and hope, in search of an object, muster a choked-out prayer. Ten days later, and our tiny girl gulps down her first meal, a chalk-white barium solution that we watch on a screen as it passes through her repaired tubes, telling us that, yes, she’s going to be OK. Gratitude makes the world shimmer, and hallelujahs seem inadequate praise.

A different hospital, and a nurse calls me, the chaplain intern, because someone else’s daughter is in the ICU, fallen into a heroin-induced coma, and her parents want words to pray. When the girl wakes up a day later, I do a card trick for her—pick a card, any card—and her dad says, in disbelief and joy, “Jesus Christ, Lila, you’re laughing.” Anyone who blasphemes God himself praises God.

There are moments when life overbrims, moments that make clear the givenness of existence, and offer us a hint of its giver. The words we typically reach for to describe these moments, “blessing” and “grace,” are blunt instruments. Blunt because vague, especially when divorced from their theological context. Even in their context, though, they can seem inadequate at best. At worst they seem like ciphers rather than mysteries. Their familiarity obscures. A poem by the Israeli poet Yehuda Amichai, “The Place Where We Are Right,” keeps returning to me:

From the place where we are right
flowers will never grow
in the spring.

The place where we are right
is hard and trampled
like a yard.

But doubts and loves
dig up the world
like a mole, a plow.

And a whisper will be heard in the place
where the ruined
house once stood.
(translation by Stephen Mitchell)

Amachai’s insight is not so different from Eckhart’s. Certainty will asphyxiate whatever it is that still breathes in our religious traditions, whatever it is that can surprise us with its whisper. Where custom has trampled a deep rut, it can be hard to hear the voice of God. Faith can aerate this lifeless ground, but only when it is capacious enough for doubts and for loves, and gives them room enough to dig.

“Did you ever hear Rabbi Heschel’s line about how faith isn’t some constant state of belief, but rather a sort of faithfulness, a loyalty to the moments when we’ve had faith?” The lawyer nods, I can’t tell whether in recognition or assent. It’s a helpful thought. My being a Christian is more understandable, to me and perhaps to others, when my faith is viewed as a sort of stubborn faithfulness to those moments of greatest belief.

But if the explanation satisfied my tablemates, who now steer the conversation toward inefficiencies in banking regulation, it didn’t quite satisfy me. My moments of greatest belief are not just data points that I choose to weigh heavily. They are thoughts that mark my consciousness, like brush points on a canvas. There they refuse erasure. There, viewed from the right perspective, the right distance, they join with other points to form a picture of reality, or the part of it visible on this side of the grave.

Robert M. Pennoyer II is a teacher and an Episcopal priest living in New York City.