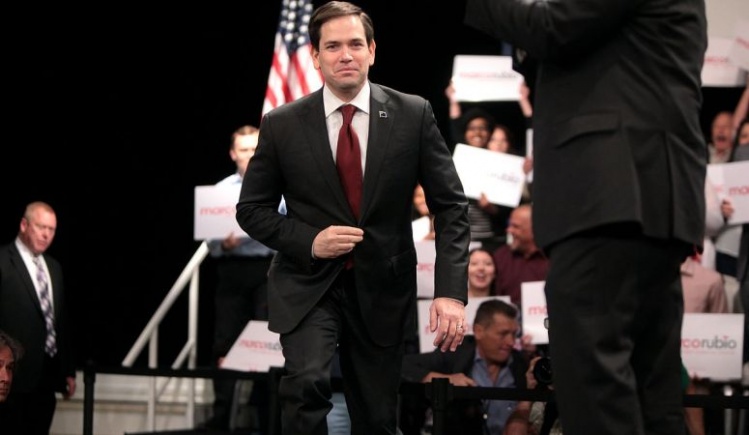 It was William Bennett, education secretary in the Reagan years and the Republican Party’s premier moralist, who embedded a phrase in the American consciousness when he bemoaned the fact that “our elites presided over an unprecedented coarsening of our culture.”

Well, to borrow another famous phrase, it is Bennett’s party and two of its presidential candidates in particular, Donald Trump and Marco Rubio, who are merrily defining our politics, our discourse and the American presidency down. The 2016 Republican primary campaign is now on track to be the crudest, most vulgar and most thoroughly disgusting contest in our nation’s history.

A policy wonk who has spent nearly two decades in politics was watching last Thursday’s GOP debate with his two teenage daughters and was horrified when one turned to him and asked: “Is this what you do?” The dad, who didn’t want to be named because he didn’t want to embarrass his daughters, said their acquaintances had higher standards than the debaters: “They would be humiliated if their friends talked to them that way.”

Call me old-fashioned or even a prig, but I have a rather elevated view of what politics can be and what it can achieve. For decades, in good political moments and bad, I have repaired for inspiration and comfort to the political philosopher Michael Sandel’s description of politics at its best. “When politics goes well,” he wrote, “we can know a good in common that we cannot know alone.”

In the GOP right now, it’s not going well.

You can place a lot of the responsibility for all this on Trump and, yes, the media. As I was writing this, MSNBC (for which I’ve worked over the years) and CNN were simultaneously broadcasting live the same Trump speech. Welcome to Trump State Television. Broadcasters have reveled in the ratings to be gained from airing Trump’s stream-of-consciousness (if politically effective) rants, and the coarser the better.

We might let the blame settle there, except that Marco Rubio got frustrated. The man the party’s leaders keep saying is the real challenger to Trump despite his early difficulties in winning actual contests decided that to beat Trump, he had to join him.

Thus began his own rants that reached a low point when he declared of Trump during a rally last month in Virginia: “I don’t understand why his hands are the size of someone who’s five-two. Have you seen his hands? They’re like this.” Here, Rubio held his thumb and fingers closely together to depict something very small indeed. He added: “And you know what they say about men with small hands.”

My naiveté extends to the fact that I did not know that small hands are often equated to diminutive endowments elsewhere. But Trump, obviously more worldly than I, went all defensive at the debate, held out his arms and declared: “Look at those hands, are they small hands? And he referred to my hands—‘if they’re small, something else must be small.’ I guarantee you there’s no problem. I guarantee.”

Then there was Trump’s response earlier in the day to the attack on him by Mitt Romney. Trump had a point that Romney was happy to seek his endorsement in 2012 (and to ignore Trump’s birtherism and his other racially and religiously tinged comments about President Obama). But here is how Trump put the matter: “He was begging for my endorsement. I could have said, ‘Mitt, drop to your knees.’ He would have dropped to his knees.”

We expect Trump to be loutish. Worse is Rubio’s refusal to take responsibility for the course he has chosen. Explaining that he would truly prefer to be talking about issues, Rubio went for the-devil-made-me-do-it defense. “But let’s be honest too about all this,” he explained. “The media has given these personal attacks that Donald Trump has made an incredible amount of coverage.”

Yes, let’s be honest: He’s right about the media, but since when is it credible, responsible or, for that matter, conservative to blame someone else for what comes out of your own mouth?

By comparison, John Kasich and Ted Cruz are looking almost as issue-oriented and responsible as, well, Hillary Clinton and Bernie Sanders. But the whole Republican race is now a moral and electoral wreck, a state of affairs that one conservative after another mourned during and after Thursday’s encounter.

For decades, conservatives have done a great business assailing liberals for promoting cultural decay. Sorry, guys, but in this campaign, you have kicked away the franchise.