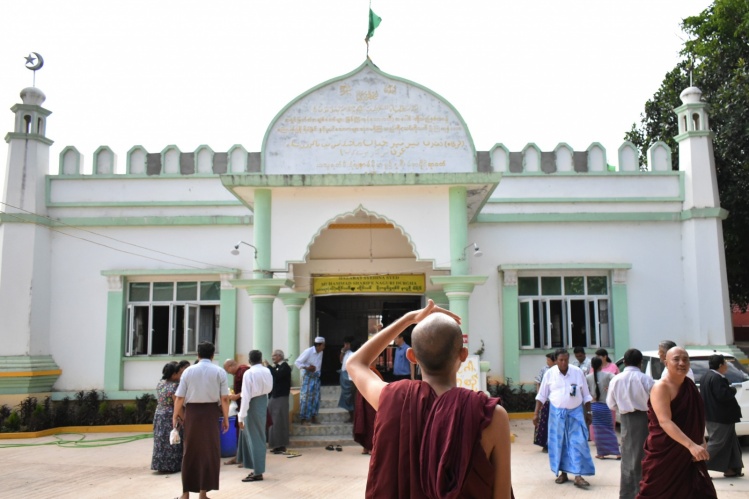 A young Buddhist monk visits a local mosque as part of a KAICIID training in interreligious dialogue, intercultural communication, and peacebuilding for young changemakers in Mandalay, Myanmar, 2019. (Photo by Aung Moe Oo. Courtesy of KAICIID.)

In June, the Austrian Parliament voted to close KAICIID, the King Abdullah bin Abdulaziz International Center for Interreligious and Intercultural Dialogue, in protest against Saudi Arabia’s human-rights record. KAICIID was inaugurated by King Abdullah of Saudi Arabia in 2012 as an intergovernmental organization with four founding states—Saudi Arabia, Spain, Austria, and the Holy See—and its constitution mandates that its board of directors be composed of members from the world’s major religions. Newly appointed Cardinal Miguel Ángel Ayuso Guixot, the incoming president of the Pontifical Council for Interreligious Dialogue, currently sits on the board representing the Catholic Church. Most of the funding and support for the organization, however, comes from the Kingdom of Saudi Arabia.

I am a political scientist, and I’ve spent the past five years researching the politics of interreligious dialogue in the Middle East. I recognize the paradox of Saudi Arabia presenting itself as a global champion of interreligious dialogue. Such contradictions were also apparent in Pope Francis’s trip to Abu Dhabi in February 2019, when he drafted and signed the Document on Human Fraternity in partnership with Sheikh Ahmed al-Tayeb under the sponsorship of the United Arab Emirates. A number of scholars have raised serious concerns about the ways in which states in the region, including Saudi Arabia and the UAE, have engaged in interreligious-dialogue initiatives as a useful distraction or, worse, as a way to extend authoritarian policies at home and abroad. The vote in Austria followed months of protests, often staged in front of the KAICIID building, against Saudi Arabia’s imprisonment and flogging of the young liberal blogger Raif Badawi. The murder of Washington Post journalist Jamal Khashoggi, Saudi Arabia’s war in Yemen, and the news of a possible execution sentence for the teenage Saudi dissident Murtaja Qureiris increased the urgency of the vote. Meanwhile, the fall of the Austrian Chancellor Sebastian Kurz, who had defended KAICIID’s presence in Vienna, left the organization vulnerable. In a sign that reflects European constellations on Islam, the vote won the support of Austria’s social democrats and its far-right Freedom Party. The bill—sponsored by Peter Pilz, formerly of Austria’s Green Party—seemed to confirm the struggle on both the left and the right in Europe to articulate a political model capable of accomodating the public presence of Islam there. In the absence of such a model, parties from both ends of the spectrum have employed the language of religious freedom to defend, alternatively, a secular liberal or Christian Europe from Islam.

The Austrian law is expelling a growing institution that is substantively advancing the possibility of interreligious-dialogue initiatives to contribute to global peace efforts.
sharetweet

Saudi Arabia, for its part, is certainly an awkward advocate for interreligious dialogue. As various policymakers have pointed out, it would be difficult for Saudi Arabia to host an interreligious center within its own borders—churches and other non-Islamic religious institutions are banned in the kingdom, and it is formally illegal for non-Muslims to worship in public. This is one reason why high-ranking Vatican diplomats had refrained from visiting Saudi Arabia for decades, and why Cardinal Jean-Louis Tauran’s diplomatic visit to Riyadh in 2018 represented such a breakthrough in relations between Saudi Arabia and the Holy See.

And yet, in trying to pressure Saudi Arabia on its human-rights record and avoid complicity in its policies, the Austrian law is expelling a growing institution that is substantively advancing the possibility of interreligious-dialogue initiatives to contribute to global peace efforts. KAICIID does this in two ways: by connecting multireligious collaboration to concrete policymaking efforts, and by helping legitimize new ideas about religious pluralism and citizenship in the region.

On the first point, KAICIID has developed a number of programs that encourage collaboration between interreligious dialogue and humanitarian development projects. KAICIID’s team inaugurated a major international fellowship program in 2015 that has offered professional training to over two hundred young leaders of multiple religious traditions from all over the world. I recently spent time with a Yazidi scholar and advocate from Iraq who participated in the program, and he attributed the formation he received at KAICIID with helping him advance his own work for peace and reconciliation in northern Iraq. KAICIID has also helped organize national interreligious platforms for religious leaders, offering them support and training. For example, the interreligious platform that KAICIID sponsors in the Central African Republic (CAR) has played an important role in mediating tensions between Muslim and Christian communities there. KAICIID has also launched an ambitious interreligious platform for the Arab world that brings an array of religious leaders in the region together for regular working meetings. The regions where KAICIID is most active, including Central Africa, the Middle East, and Myanmar, are places where improving interreligious relations and coordination can change a country’s chances for peace. Not surprisingly, the two leaders of the platform in CAR, Cardinal Dieudonné Nzapalainga and Imam Omar Kobine Layama, were among the first leaders to publicly come to KAICIID’s defense after the vote in the Austrian Parliament, along with many of the organization’s recent fellows and religious partners.

In constructing these projects, KAICIID has proved its mettle as a serious and mostly independent organization. As a multireligious, intergovernmental organization, KAICIID has taken on a useful role as an institutional container that bridges new forms of partnership between international organizations and religious communities around a range of humanitarian and developmental goals. It has worked with an array of faith-based organizations, like Religions for Peace, the Parliament of the World’s Religions, and the World Council of Churches, especially in international policymaking arenas like the United Nations, the Organization for Security and Cooperation in Europe, and the European Union. This institutional bridging has helped produce new policy projects, like the 2017 UN Plan of Action for Religious Leaders and Actors to Prevent Incitement to Violence That Could Lead to Atrocity Crimes as well as regular G20 interfaith meetings.

For all of its advances, this process of reform and renewal remains a fragile one; it ought to be supported, not snuffed out.
sharetweet

With such initiatives, KAICIID represents the arrival of new forms of collaboration between religious leaders and states, both globally and regionally, that have emerged in a post-9/11, post–Arab Spring, post-ISIS world. These new models are recasting the role that religious communities, ideas, and actors might play in the global public sphere. Particularly in the context of the Middle East, KAICIID’s work has helped support new and creative thinking about religious pluralism and citizenship from within the matrix of Islamic jurisprudence, including by actors like Sheikh Abdullah bin Bayyah, who orchestrated the landmark 2016 Marrakesh Declaration and who also worked with KAICIID on the 2017 UN Action Plan. The language and practice of interreligious dialogue, which sets religious pluralism and religious dynamism in a positive relationship, has proved attractive to religious leaders and states who have sought a model of political development distinct from either religious authoritarianism or secular liberalism. Across a number of recent declarations and projects originating in the Middle East, KAICIID, bin Bayyah, and other actors representing official and influential Islam have adopted the language of “common” or “inclusive” citizenship to express this religiously rooted model of political development.

This model of inclusive citizenship echoes central ideas in recent Catholic political thought, especially the concept of integral human development, which has been a centerpiece of Pope Francis’s papacy. These parallels can be clearly traced in the Document of Human Fraternity that Francis signed with Sheikh Ahmed al-Tayeb of al-Azhar University, in which both committed to a strong vision of religious renewal in response to the twin ills of religious extremism and secular materialism.

Although important public figures in Saudi Arabia like Muhammad al-Issa, the Secretary General of the Muslim World League, have increasingly supported this vision of inclusive citizenship (and taken major symbolic steps to reformulate the public relationship between Saudi Arabia and both Christian and Jewish communities), the religious-reform process within Saudi Arabia remains complex and contradictory. Nevertheless, with official Saudi support and in collaboration with the Vatican and other religious organizations, KAICIID is actively participating in a major renegotiation of religion and state in the region, one in which ideas of religious freedom, citizenship, and pluralism might find deeper social and religious grounding.

But for all of its advances, this process of reform and renewal remains a fragile one; it ought to be supported, not snuffed out. Booting KAICIID from Vienna might win short-run concessions (the execution order on Qureiris has been overturned), but it does so at a heavy cost. The move will likely drain support for interreligious dialogue in the Middle East, and fuel the perception that “religious freedom” in Europe is really a code word for preserving exclusivist versions of either secularism or Christianity. In other words, by attempting to unveil the apparent contradictions of Saudi Arabia’s interreligious dialogue efforts, the Austrian law also reveals the apparent contradictions of European policies on religious freedom. Whether or not the perception is accurate, to many in the Middle East, religious freedom in Europe invariably appears to protect the religious practices of secular and Christian individuals while punishing those of Muslims, as recent European legislation on burkas, burkinis, and circumcision would suggest. If Europe is interested in supporting a model of religious pluralism that meaningfully includes Islam, then interreligious-dialogue initiatives like KAICIID have much to offer. Surely the Austrians can find other ways to protest Saudi Arabia’s human-rights policies.

Michael Driessen is associate professor of political science and international affairs at John Cabot University, Rome, where he directs the university’s Interfaith Initiative. He has written the book Religion and Democratization (Oxford University Press), and in 2019 was a Jean Monnet Fellow at the European University Institute in Florence. He is a frequent collaborator with the Lebanese Interfaith Foundation, Adyan. 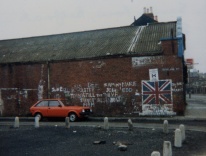