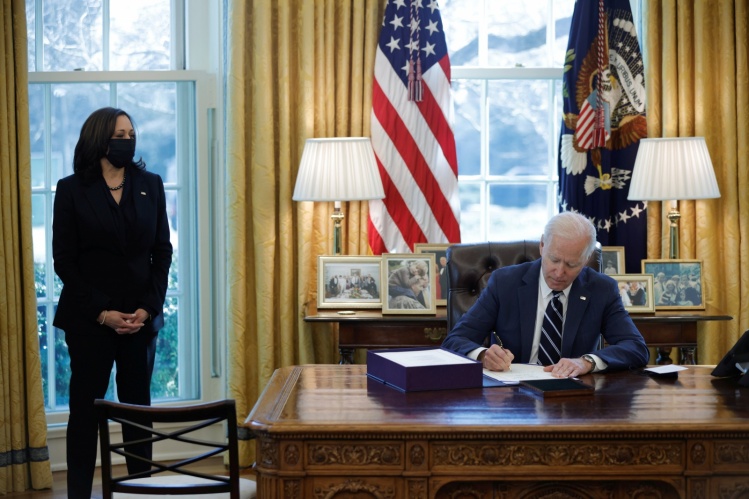 The $1.9 trillion American Rescue Plan (ARP) signed into law by President Joe Biden on March 11 does more than bring necessary relief to the millions of people who have suffered economically during the pandemic. With its myriad and wide-ranging provisions, it might very well restore faith in the government’s ability to deliver large-scale programs that improve people’s lives.

Signed one year to the day after the World Health Organization declared COVID-19 a pandemic, the ARP includes broadly popular measures to combat the health crisis itself
and to ease the economic devastation that lockdowns and stay-at-home orders have caused. Funds for vaccine distribution and testing, money for state and local governments, loans for small businesses, and aid to schools to help them reopen safely will help communities get back on track. Another round of relief checks, the extension of $300-per-week unemployment benefits, and rental, mortgage, and food relief will allow those whose livelihoods have been affected by the pandemic to feed themselves and their families and to remain
in their homes.

The ARP’s broad popularity is striking: according to a CBS/YouGov poll, three out of four Americans support it, including 46 percent of Republicans. Yet not a single Republican in Congress voted for the legislation. For a time it also seemed possible that disagreements between factions within the Democratic Party might threaten the bill’s passage. But in the end conservative, moderate, and progressive Democrats demonstrated that they were capable of working together—and of overcoming Republican intransigence—when it mattered most.

The ARP is perhaps the single greatest expression of solidarity in American politics since Lyndon Johnson’s Great Society.
sharetweet

The ARP’s most progressive provisions target long-standing structural inequities in our economy, emphasizing care for children and families in particular. The law includes an enormous increase in the child tax credit while expanding eligibility; the bill is expected to reduce childhood poverty in the United States by half. The ARP also expands financial assistance for coverage under the Affordable Care Act, and provides funding to help people who have lost their jobs keep their health-care coverage.

GOP legislators have complained that the legislation contains too many “liberal wish-list” items that are too widely distributed to be properly characterized as pandemic relief. But that’s precisely the point. The measures Republicans deride as gratuitous are those meant to address poverty more fundamentally, so that, when the next economic crisis arrives, fewer Americans will find their lives upended by it. Another strength of the bill is that, rather than pitting the middle class against the poor or treating those on “welfare” as a drag on the economy, it ties the well-being of Americans together—in contrast to Donald Trump’s signature tax-cut giveaway that overwhelmingly benefited the wealthy. This is a philosophical shift as much as a policy achievement: the ARP is perhaps the single greatest expression of solidarity in American politics since Lyndon Johnson’s Great Society.

The bill is not perfect. Because the budget-reconciliation process was used to pass the ARP—reducing the number of votes required to pass in the Senate from sixty to fifty—the Senate parliamentarian ruled that a federal minimum-wage increase could not be included. The money delivered to individuals through relief checks is subject to collection by creditors. Most important, many of the bill’s provisions—the extension of the moratorium on evictions, increased unemployment benefits, the child tax credit—will expire without further legislation to extend them or make them permanent.

That makes it all the more important for Democrats to make clear to the American public just how significant an achievement the ARP is. They must also make sure its rollout is as smooth as possible (no Obamacare-website crashes this time). And they cannot let Republicans control the terms of the public debate over the bill’s provisions or the benefits it will bring. Democrats already have the majority of the country on their side. The best way to pass similar laws in the future, and to ensure a full break from the discredited austerity politics that has worsened the lives of so many Americans since the 1980s, is to remind people of the good that the government—and only the government—can do, of what can be achieved politically when citizens care for each other. As Biden said on the night of March 11: “We need to remember the government isn’t some foreign force in a distant capital. No, it’s us. All of us. We, the people.”