But it’s not a step toward schism.
By Massimo Faggioli
LGBTQ issues
Pope Francis 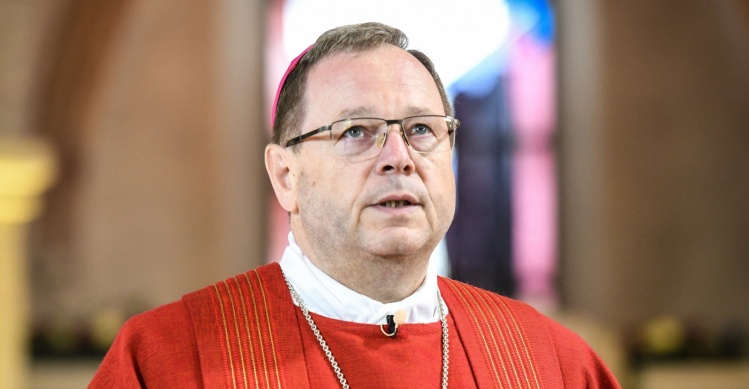 Does the Church have the power to bless same-sex unions? That was the question posed in a dubium submitted to the Congregation for the Doctrine of Faith in February, and the answer that was made public some weeks later is by now well known: no. That the response received the assent of Pope Francis also received a lot of attention, much of it negative, especially in the secular, liberal-progressive circles of the West. Those Catholics who see Francis as an ally and potential game-changer on Church teaching on homosexuality and same-sex relationships were also disappointed. But maybe the most interesting reaction came out of Germany, where, on May 10, about a hundred Catholic churches around the country held blessing ceremonies for same-sex couples.

This was no surreptitious, underground initiative. Indeed, many of the ceremonies were held in front of the cameras of state-owned media, under the banner of the movement Liebe Gewinnt (Love Wins). Nor was this an anti-Catholic or anti-Christian protest; the blessings were understood as an act of ecclesial reappropriation. Liebe Gewinnt includes priests, deacons, and volunteers, as well as theologians and the Catholic reform movement Maria 2.0. If the blessings were akin to an act of public disobedience, they were also an act of pastoral responsibility, undertaken in a peaceful, non-antagonistic way, with no outrage or anger directed at the institutional Church. True, the president of the German bishops’ conference, Bishop Georg Bätzing of Limburg, called the action “unhelpful.” But this is the same Bishop Bätzing who leads the German “Synodal Path” (on par with the powerful lay organization, the Central Committee of German Catholics, or ZdK), attempting to navigate perilous waters between a watchful Vatican and the increasingly radical demands for reform in his Church. There are numerous bishops in his conference who also criticized the CDF’s response, while hundreds of German theologians issued a manifesto in protest.

Bätzing added that the blessings “are not suitable as an instrument of church political manifestations or political actions.” On the other hand, Thomas Sternberg, the president of the Central Committee of German Catholics, said they are not “acts of political demonstration.” Yet what happened in Germany reflects the religious sentiments of the wider German-speaking Catholic regions of Europe with similar ecclesial sensibilities (Austria, Switzerland, parts of central Eastern Europe, Belgium, and northern Italy). For example, the highest ranking member of the clergy to criticize the Vatican statement was the cardinal archbishop of Vienna, Christoph Schönborn, who had spoken with remarkable honesty and courage about gay couples during the assembly of the Bishops’ Synod in October 2015.

How has the Vatican responded to the blessings in Germany? Vatican News, the official media outlet, reported on the blessings in an article available in German and English (though not in Italian). But in the last two months, there’s been nothing else on the CDF statement to come from the Vatican. Since the beginning of the  backlash, it has never been clear just how involved Francis might have been in the statement. Journalists and spin doctors close to the pope have tried to distance him from it, but as of now there is very little to support the (unlikely) hypothesis that he somehow disavowed it. It seems that Francis prefers to play alone, without identifying himself with the Roman Curia, especially when his Curia says unpopular things.

The blessings in Germany should be seen in the larger context of that Church’s split with the Vatican over the past four decades. (It would be wrong to attribute these latest developments only to the legacy of the recently deceased Hans Küng: prominent theologians and Church leaders with views quite different from Küng’s are part of a larger, non-partisan ecclesial and theological movement.) Tensions first arose during the pontificate of John Paul II, and then again during the Benedict XVI papacy: on women deacons; on the participation of Catholics in state-run centers that release “certificates of counseling” to women seeking abortions; on the role of lay pastoral ministers (with degrees in Catholic theology) who are on the payroll of dioceses and parishes; on issues of sexual morality; on intercommunion with Lutherans. Just as in other churches, including the U.S. Church, the rifts became especially salient with the explosion of the sex-abuse crisis, which reached its peak in Germany in 2010, when Benedict was pope.

What makes the German situation unique is the national Synodal Path, which began in March 2019 and is still unfolding.
sharetweet

But what makes the German situation unique is the national Synodal Path, which began in March 2019 and is still unfolding. The German synod has become for conservative Catholics (including those in the United States) Exhibit A in their contention that Francis’s openings are rupturing the Church’s unity and may very well lead to schism. The work of the Synodal Path is structured in four different areas. One of them is “sexual morality,” based on the premise that the teaching of the Catholic Church in this area must be newly appraised if it has become irrelevant or outright rejected. This is one of the differences between the Catholic Church in Germany and the United States, where at the institutional level there’s not even a chance of conversation about the possibility of a national synodal event. (It also remains to be seen how the U.S. bishops will receive and implement the plan, announced by the Vatican on May 21, of a three-year synodal journey with different phases—diocesan, national and continental, universal—culminating with an assembly in October 2023 in Rome.)

But there are other differences worth understanding too. The first is that Germans seem to get less worked up about or worried by international reaction, since they think the difference between a wedding and a blessing is clear. A blessing is the acknowledgement of the sacramentality of a stable loving relationship, but not in the sense of the sacrament of marriage; it has much more to do with recognition than with legalization or regulation. (Plus, there have been blessings like these in the past, just not so publicly conducted.) This distinction tends to get lost in a legally minded Christian culture, such as that in the United States (among both conservatives and  progressives, though in different ways). In Germany, gay marriage has been legal since 2017, but gay Catholic couples tend not to marry in non-Catholic churches, while that is more frequent here. Additionally, in Germany, as in Europe generally, marriage has also lost the appeal and importance it once held; though Americans overall marry and remarry more than Europeans, marriage is still sacrosanct in certain segments of U.S. Christianity. The second difference is that this act of disobedience does not fit within the framing of the American culture wars. Many of the priests who offered blessings are not “left-wing” high-profile Church personalities. They are ordinary, relatively anonymous pastors active in Catholic social work—not firebrands staking out an oppositional position against a political-ecclesial party.

The Catholic Church in Germany finds itself at an inflection point. The Church is still widely represented in public matters; for example, at May’s ecumenical national assembly of Catholics and Lutherans (“Kirchentag”) in Frankfurt, an event broadcast on public television, the official greeting was offered by the president of the Federal Republic. The influence of the Catholic Church cannot be measured simply by the number of people going to Mass on Sunday. This is an Anglo-Protestant sociological criterion that fails to take into account many other factors. Still, in 2019 alone, 272,000 Catholics and 270,000 Protestants officially left their respective churches. Church attendance is much lower among Lutherans than among Catholics (according to the German Bishops’ Conference, now it’s about 10 percent of registered Catholics). Between 2010 and 2019, church weddings declined by nearly 20 percent among Catholics and 19 percent among Protestants. Meanwhile, Catholic women movements in Germany are organized and vigilant with respect to the Synodal Path; on May 17, for the second year in a row, twelve women in twelve different locations preached at Mass as part of a nationwide action called Preachers’ Day. And for the second year in a row, the German bishops put up no official opposition.

The Catholic Church in Germany, theologically vital in its contributions to Vatican II, was the epicenter of tensions between post-conciliar progressives and the Vatican of John Paul II and Benedict XVI. Germany remains the land of Rahner, Ratzinger, and Küng, but also of Martin Luther. In the first years of his pontificate, Francis helped German Catholics see an opening to overcoming some of the doctrinal stubbornness of the Vatican; he kept things moving in a way that seemed to signal a shift in policy. Yet while Francis’s voice on global issues remains unmistakable, what’s not as clear is where the pontificate is going on ecclesial issues—models of the priesthood and parish, the role of the laity, women in ecclesial ministry. As German journalist and Vatican expert Christoph Strack wrote for the public state-owned Deutsche Welle, “It’s become clear that the Congregation for the Doctrine of the Faith led by Spanish Jesuit Cardinal Ladaria has reservations about the projects of fundamental reform for the Catholic Church coming from Germany.” But it is also worth noting that Ladaria is the same cardinal prefect of the CDF who, on May 7, sent a warning to the U.S. bishops to proceed with caution in their plan to issue a document against pro-choice Catholic politicians like President Joe Biden.

The immediate future of European Catholicism depends in part on what will happen with the German synod. Rome’s reaction to the synodal process as it unfolds, in terms of what might arise in regard to institutional and doctrinal development, remains to be seen. There seems to be a gap emerging between the German synod’s openness to doctrinal development and Francis’s eminently pastoral understanding of synodality. And it’s not just the deliberate ambiguity of Francis regarding the CDF statement on the blessing of gay unions. There’s also Francis’s relationship with the apparatus of the Roman Curia and with a global Church engaged in a synodal movement on intra-ecclesial issues. How the papacy and German Catholicism relate has always provided important indications about a pontificate. The blessing of gay couples in Catholic churches in Germany is not a step towards schism. But is it indicative of the issues that will be raised globally by the just-announced three-year synodal journey.