Gaps in the Story 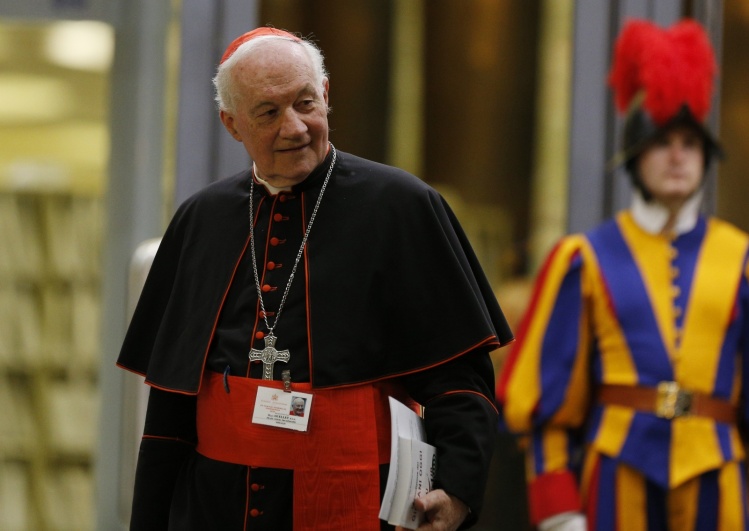 Cardinal Marc Ouellet, prefect of the Congregation for Bishops, leaves the opening session of the Synod of Bishops on young people, the faith and vocational discernment at the Vatican (CNS photo / Paul Haring)

For all of the wrath Archbishop Carlo Maria Viganò expressed in his “testimony” over the Vatican’s handling of sexual-abuse allegations against Archbishop Theodore McCarrick, there is an enormous gap at the center of the conspiracy he alleges. He wrote that, in December 2006, he forwarded information to his superiors about a legal case involving a priest who had accused McCarrick of sexually abusing him. But Viganò never got a written response from Vatican officials, he complained, and three or four years passed before he heard anything. Finally, he wrote, Cardinal Giovanni-Battista Re, prefect of the Congregation for Bishops, told him that Pope Benedict XVI had “imposed” sanctions on McCarrick that barred him from public ministry.

“I do not know when Pope Benedict took these measures against McCarrick, whether in 2009 or 2010…just as I do not know who was responsible for this incredible delay,” he wrote in his August 25 missive. He added that, in June, 2013, he referred Pope Francis to the Congregation for Bishops and its dossier on McCarrick, whom he said Pope Benedict had “ordered” to withdraw to a life of prayer and penance.

Cardinal Marc Ouellet, prefect of the Congregation for Bishops since 2010, responded October 7 with an “open letter” to Viganò that fills in some of the gap:

After re-examining the archives, I can ascertain that there are no corresponding documents signed by either Pope, neither is there a note of an audience with my predecessor, Cardinal Giovanni-Battista Re, giving Archbishop Emeritus McCarrick an obligatory mandate of silence and to retire to a private life, carrying canonical penalties. The reason being that at that time, unlike today, there was not sufficient proof of his alleged guilt.

Instead, Ouellet wrote, there was a less formal outcome in which a papal legate urged McCarrick to live a discreet life. Benedict did not “impose” sanctions, as Viganò had urged he do under section 1405 of the Code of Canon Law, which says that only the pope can discipline a cardinal.

If so, that destroys Viganò’s claim that Francis reversed the sanction that Benedict imposed; there was no canonical sanction. The implication of his “testimony” and subsequent follow-up letter was that support for his charges was in the file. But still, Ouellet’s account is unsettling: How could Vatican authorities have failed to substantiate the charges that McCarrick sexually harassed or abused priests and seminarians after the church had agreed to two secret legal settlements of these charges?

How could Vatican authorities have failed to substantiate the charges that McCarrick sexually harassed or abused priests and seminarians after the church had agreed to two secret legal settlements of these charges?
sharetweet

Without entering here into the details, it needs to be understood that the decisions taken by the Supreme Pontiff are based on information available at a precise moment, which constitute the object of a careful judgement which is not infallible. It seems unjust to me to conclude that the persons in charge of the prior discernment are corrupt even though, in this concrete case, some suspicions provided by witnesses should have been further examined. The prelate in question knew how to defend himself very skillfully regarding the doubts that were raised about him.

That is: Pope Benedict made a bad decision that was based on a botched investigation.

After the story of Viganò’s “testimony” broke with its release to two ideologically attuned Catholic-news websites, some pundits chided the mainstream news media for not reporting what it knew about McCarrick. Various newspaper reporters did in fact look into the allegations against McCarrick but were unable to substantiate them, in part because the legal settlements were not only out of court, but were made in cases that never were actually filed in court. The Vatican would have had access to the documents, though. Also, reporters found that priests weren’t willing to go on the record—another problem the Holy See should have been able to overcome in its own secret investigation.

This raises the suspicion that the investigation was not so much botched as fixed—it will take more disclosure to clarify what happened. Viganò and others seeking to oust Pope Francis and a long list of prelates they dislike have tried to make the story sound as sinister as possible. But Viganò did not have the facts—at its heart, the Viganò testimony offered speculation and bitterness. It did draw attention to a problem that is real, though.

It may be that the convergence of the McCarrick sexual-abuse case, the Pennsylvania grand-jury report on sexual abuse of minors and Viganò’s uncorroborated claims will lead to a long-awaited cleansing. The first step is for church authorities to admit the problem, and a statement the Holy See Press Office released October 6 seems to do that:

Both abuse and its cover-up can no longer be tolerated and a different treatment for Bishops who have committed or covered up abuse, in fact represents a form of clericalism that is no longer acceptable.