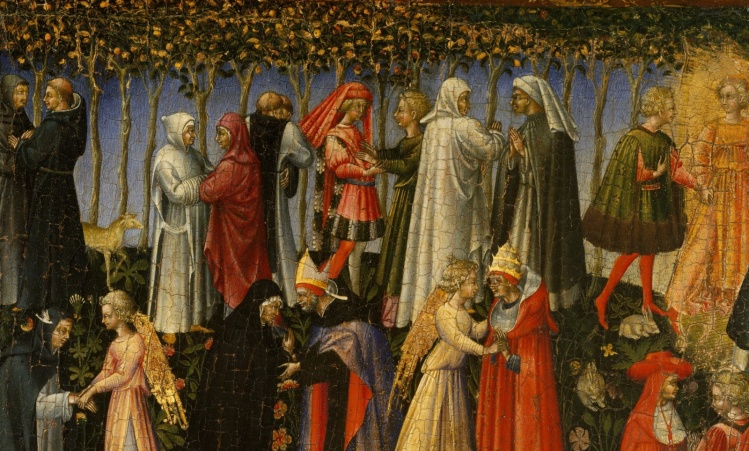 My mother died last summer—after a long illness, as the saying goes. Her mind was fierce, sharp, and politically engaged until the very end, though a noxious combination of physical troubles left her bedbound for the last seven years of her life. For most of that time, she was reasonably happy. She was the center of her world, which included family, friends, and conversation partners, whom she engaged in the flesh, over the phone, and even on the television screen. A political liberal and a progressive Catholic, she was an enthusiastic consumer of MSNBC—although she never quite got over the network’s decision to let Keith Olbermann go in 2011. But her last few months were tough.

What I haven’t been able to let go of is the vivid picture of my mother in the last stages of her physical decline. A snapshot of her slumped on the edge of the bed, small, weak, exhausted, grumpy, and gasping for air has seared my memory. Over the Christmas season, I tried to let that image fade, and to replace it with mental pictures of her during healthier and happier times. But that endeavor is more complicated than it first appears. Memory is relational and communal. My memories of her are inevitably bound up with associated memories of me and other family members. Finding memories which are kind to all of us is not easy.

For example, suppose I try to remember my mother in her late thirties. She was in full physical vigor. But I was in my early teens—a time no grown woman wants to dwell upon, including me.  Early adolescence is miserable, and frequently makes a daughter’s relationship with her mother strained and difficult. Well then, what about two decades later, when she was in her late fifties and early sixties? We were more distant, because I was in the throes of launching my career, moving from New Haven to San Francisco to Boston to South Bend within a five-year period. After I finally moved back home to New England, my relationship with my mother got stronger, even as she herself got progressively weaker.

The puzzles of identity, relationship, memory, and embodiment may be too difficult to tackle in this life. I hope they will get resolved in the next one, which prompted me to consider the resources of the Christian tradition on life after death. Unfortunately, they raise more questions than they answer, in part because the Christian tradition is a sometimes uneasy amalgam of different strands of Greek philosophy and the Biblical tradition.

Many Christians have thought of heaven as a community of souls like angels, without bodies, focused totally on the beatific vision. Losing our earthly bodies, we will lose our individuality, and become one with God. Earthly things, including embodied relationships, are left behind. That’s one way to go. It sidesteps the problem by dismissing the ultimate importance of embodiment.

The puzzles of identity, relationship, memory, and embodiment may be too difficult to tackle in this life. I hope they will get resolved in the next one.
sharetweet

According to the Apostle’s Creed, however, Christians believe not only in a spiritual resurrection, but also in the resurrection of the flesh (carnis resurrectionem). That is a hopeful general principle. But its operational details remain remarkably hazy. What age will our bodies be when they’re resurrected? Some have speculated that in Paradise, everyone will be thirty-three years old—when Jesus died and rose from the dead. I’m not so sure that’s a good idea. For one thing, a homogenous community of thirty-three-year-olds sounds like a bad, eternal reboot of Melrose Place. Paradise can’t be that sort of dull uniformity.

But there are deeper reasons. First, I have always doubted that everyone is their best, most authentic self at the age of thirty-three. I think different people may be most themselves at different physical ages. We often talk about children with “old souls.” But I have also known one distinguished law professor who exuded the existential joy of a nine-year-old boy, and another highly responsible family man whose eyes glinted with the restless strength of a nineteen-year-old about to set off on a cross-country motorcycle trip.

Second, sometimes death deprives a family not simply of a person, but of an entire trajectory of a relationship. A mother who loses a one-year-old boy in a car accident does not only mourn the adult that he would have become; she mourns the baby, the toddler, the child, and the youth as well. She mourns their relationship and their mutual influence as mother and son. Wiping her tears away, as the angels in Paradise are promised to do, must mean giving her the opportunity to encounter her child in the full sweep of his life, not just when he is a grown man. Even the shared experience of decline can be mourned. If a young soldier is killed in battle, his widowed bride misses not only their current life as newlyweds, but also the opportunity to nurture their common life over the course of decades to come. She weeps over the lost blessing of growing old together.

Our bodies do not remain the same. They are constantly pushed forward by time, as they are conceived, born, develop, degenerate, and die. But Paradise is marked by eternity, not by time. Of course, if we think of eternity as a profound stillness totally beyond time and its vicissitudes, it offers no solution. Nor does it help to think of eternity as an endless string of time, like earthly life but far longer.

But what if we follow St. Augustine in thinking of eternity as the fullness of time—as including, honoring, and yet transcending the slivers of existence that time parcels out to us moment by moment? We might then think of our redeemed bodies almost like diamonds, simultaneously refracting different times of our lives as we turn in the light of God’s love. In Paradise, it might be possible to be both a vigorous young mother and a wise but frail elder. Even more wondrously, it might be possible to be a turbulent thirteen-year-old and a responsible, middle-aged daughter.

Mercy for the Remarried