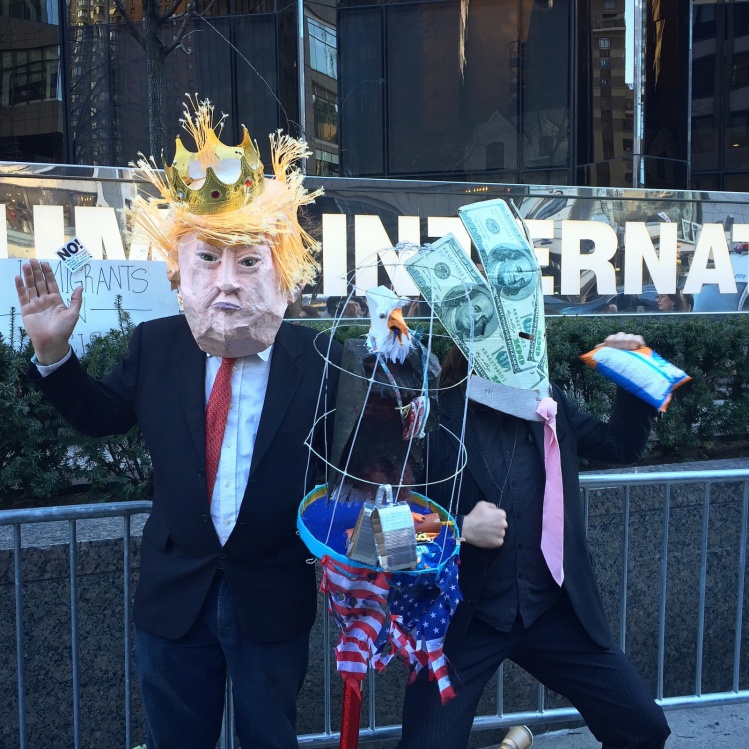 A year into the Trump administration, there is no apparent containment strategy. The adults assigned to channel the man into the responsibilities and dignity of office—Jared and Ivanka, Mattis, McMaster, and Kelly—have all punted. Of course, we don’t know what disasters have been averted, or what others could be worse than they are. Not only is Trump his own master, he is his own master of ceremonies. He does what he wants and announces his triumphs before, during, and after their execution.

Nothing new here, reports Maggie Haberman in a New Yorker interview. Once a reporter for the New York tabloids and now at the New York Times (and the lead in reporting Trump’s daily misbehavior), she laments the failure of the media, and presumably herself, to fully convey what New Yorkers already knew from Trump’s years of front-page headlines. After several bankruptcies, they knew “that he was not a real businessman,” but an egomaniac who licensed his name and pursued stardom on reality TV. His associates were “not just people with questionable business practices” but “people with a history of violence.” “Throughout the campaign,” Haberman notes, “he evinced some authoritarian impulses...he kept praising dictators,” and then denied it. “One of the things that’s really challenging about covering him is he refuses to agree with the basic fact of what he just said, when you point it out.” Now, a year after the election, the rest of America knows all of this.

Trump is what the streetwise Urban Dictionary calls a “fraudster”: “an individual that flouts the norms, stands out from the crowd and thinks outside of the box. ‘Fraudsters’ stand for the idea of going against the tide, doing their own thing and doing [it] their own way. It’s a freedom and a belief that you can do anything and be anyone. Being a ‘Fraudster’ is a way of life.” Haberman doesn’t use that word, but notes Trump’s “ability to will what he thinks into reality.”

Slipping into the “slough of despond” does no one any good. But given the assaults on reality, how to react?
sharetweet

Though “fraudster” emphasizes a person’s outlook and behavior as itself fraudulent, it does not necessarily mean that the person has committed fraud in a legal sense. But, alas, both meanings apply to Trump, according to accounts reported during the campaign and after: he swindled contractors and workers, sexually harassed women, cheated on his wives, and is making up government as he goes. Trump’s “ability to will what he thinks into reality,” continues in matters far graver for the country and the world. To watch a fraudster dismantle the hard-won norms and customs of constitutional government is depressing and disheartening. It is also terrifying. Barring death or impeachment, Trump will be with us at least until 2020.

That makes it imperative for the rest of us to hold on to the reality that he heedlessly denies, reshapes, abuses. Slipping into the “slough of despond” does no one any good. But given the assaults on reality, how to react?

My fellow New Yorkers, who voted overwhelmingly against Trump, have a robust immune response to the moronic. Murmurs that Trump’s administration resembles the Nazi regime are laughed off with, “more likely Banana Republic.” Neighborly encounters once marked with a nod, now compel brief but pungent exchanges and repudiations of the latest escapade. Perfect strangers will join street-corner, restaurant, and bus conversations weighing in with their own finely honed opinions.

New York City is regarded in America as a hard and hostile place. In fact, its citizens value irony, arguments, and the sharp quip. Conversations on a grocery line or waiting for the bus are not uncommon and usually humorous. Let me report that during the Trump presidency, these interactions have grown exponentially. I have chatted at length with more of my neighbors in the past year, than the past four decades. Everyone holds a door for the next person. Restaurants and stores, with their staffs of immigrants and undocumented workers, have prominently posted signs announcing, “Hate has no business here”  (in seven languages).

Perhaps this is all desperate irony.

Or perhaps, the response to our national ignominy is the assertion of an alternative reality to the one in Trump’s head. While there is agreement that we are all in the same boat, one that could sink at any moment, there is also a modicum of kindness and cheerfulness, an uptick in conversation, an increase in bills pressed into an outstretched hand. That is what New Yorkers seem to be up to after a year of Trump. I thought the rest of you should know.