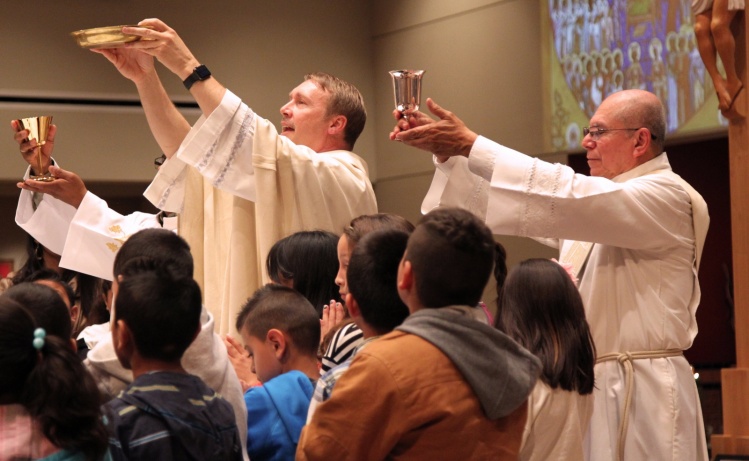 When Pope Francis issued his motu proprio on liturgical translation (Magnum principium) in September, most of the commentary that followed was focused on the change in Canon Law this enacted, which strengthened the role of bishops’ conferences. The 2001 Vatican instruction on translation, Liturgiam authenticam, had strongly centralized authority in Rome and diminished the role of the bishops’ conferences. So it was big news that Pope Francis reaffirmed authoritatively the Vatican II vision expressed in the Constitution on the Sacred Liturgy 36.4, restoring to the bishops their proper role in both preparing and approving translations.

As important as the question of oversight is, however, the portions of the motu proprio that are directly concerned with translation itself are worthy of the most careful consideration. Francis says a lot about the values underlying the production and reception of liturgical texts in vernacular languages. He has provided us with an interesting commentary that touches on many of the neuralgic issues of the “translation wars” and reframes our understanding of them. He did not merely move around the players. He has spoken helpfully about the task.

The first thing to notice is how frequently Francis draws on the first instruction on liturgical translation, approved by Paul VI in 1969 and generally known by its French name, Comme le prévoit (CLP). (This instruction was replaced by Liturgiam authenticam in 2001.) The 1973 missal translation produced according to Comme le prévoit was relentlessly criticized in the run-up to the most recently published English translation of the Roman Missal, issued in 2011. Liturgiam authenticam, in fact, includes an unusual scolding: “The omissions or errors which affect certain existing vernacular translations—especially in the case of certain languages—have impeded the progress of the inculturation that actually should have taken place. Consequently, the Church has been prevented from laying the foundation for a fuller, healthier and more authentic renewal.” For those in the know, this harsh assessment pointed the finger of blame directly at Comme le prévoit and those who were guided by it.

So it is surprising news, and of the first importance in understanding the pope’s statement, to see that Francis draws heavily upon Comme le prévoit to formulate the interpretive claims he now makes his own in Magnum principium (MP).

The following passages from Francis’s motu proprio are borrowed directly from that 1969 instruction on translation:

MP 6: “Because the liturgical text is a ritual sign it is a means of oral communication. However, for the believers who celebrate the sacred rites the word is also a mystery. Indeed when words are uttered, in particular when the Sacred Scriptures are read, God speaks to us. In the Gospel Christ himself speaks to his people who respond either themselves or through the celebrant by prayer to the Lord in the Holy Spirit.”

CLP 5: “A liturgical text, inasmuch as it is a ritual sign, is a medium of spoken communication. It is, first of all, a sign perceived by the senses and used by men to communicate with each other. But to believers who celebrate the sacred rites a word is itself a ‘mystery.’ By spoken words Christ himself speaks to his people and the people, through the Spirit in the Church, answer their Lord.”

MP 7: “The goal of the translation of liturgical texts and of biblical texts for the Liturgy of the Word is to announce the word of salvation to the faithful in obedience to the faith and to express the prayer of the Church to the Lord.”

CLP 6: “The purpose of liturgical translations is to proclaim the message of salvation to believers and to express the prayer of the Church to the Lord.”

CLP 6: “Liturgical translation . . . must faithfully communicate to a given people, and in their own language, that which the Church by means of this given text originally intended to communicate to another people in another time.”

MP 7: “… Fidelity cannot always be judged by individual words but must be sought in the context of the whole communicative act and according to its literary genre.”
CLP 6: “A faithful translation, therefore, cannot be judged on the basis of individual words: the total context of this specific act of communication must be kept in mind, as well as the literary form proper to the respective language.”

What does it mean to prepare a translation faithfully?
sharetweet

These are significant elements in the translation philosophy of Comme le prévoit. And now they are no longer the words of an obsolete instruction, much less a document standing in the shadows of official disapproval. They have become Pope Francis’s own words, spoken for our time.

The key instance of this is in paragraph 6 of Comme le prévoit, which says that translation must not “merely reproduce” the ideas and expressions of the original, but must “faithfully communicate” what the Church intends to convey. And, again, it says in paragraph 33, “Some euchological and sacramental formularies . . . should be translated integrally and faithfully, without variations, omissions, or insertions.” So on the one hand, faithfulness is a question of conveying meaning; on the other hand, faithfulness dictates that some formularies be translated with great exactitude.

At stake here is precisely the question: What does it mean to prepare a translation faithfully? Until we grasp this, we won’t know what it means that our bishops are to do so “fideliter.” Archbishop Roche is surely right in saying that Liturgiam authenticam advocated faithful reproduction of the Latin sources. But the way of faithfulness, as Francis describes it, consists of more than this. It must also take into account pastoral values and respect for the receptor language—points Francis makes in Magnum principium.

Echoing the words of Paul VI, Francis speaks of the vernacular prayers becoming “the voice of the Church.” They are not a mere shadow of the Latin originals. They have their own integrity. This is a development Francis describes as arising from the Council itself, part of its “great principle” (magnum principium) of liturgical reform. Again, he draws upon Comme le prévoit:

MP 2: “[The Latin Church] willingly opened the door so that these versions [i.e. vernacular texts], as part of the rites themselves, might become the voice of the Church celebrating the divine mysteries along with the Latin language.”

CLP 6: “Liturgical translations have become . . . the voice of the Church” (address of Paul VI to participants in the congress on translations of liturgical texts, 10 November 1965).

Whereas Liturgiam authenticam advocates preserving the content and integrity of the original texts so as to develop a “sacral” language, spoken only in divine worship (LA 47), Francis has a different agenda. His describes the role of the vernacular texts as functioning “in a not dissimilar way to liturgical Latin for their elegance of style and the profundity of their concepts with the aim of nourishing the faith.”

The characteristics Francis chooses to highlight here are most interesting. He does not praise liturgical Latin as a model because it is removed from life outside of worship, nor because it preserves our historical patrimony, still less because it serves as a “veil” that shrouds the holy. He holds up for emulation only these two virtues: Latin’s elegant style and its ability to express profound concepts that nurture faith.

Alas, anyone who has heard or prayed with the 2011 English translation of the Roman Missal would be hard pressed to honestly claim that it exhibits “elegance of style” or “profundity of concepts” in any but a few places. As Rupert Shortt, who reviewed the Missal translation in the Times Literary Supplement, observed: “The Latin is of course rendered more exactly, but frequently at the price of losing elegance or pith. Some of the collects are too stilted to lend themselves to public recitation. Reading as though composed by incompetent pedants, they should have been sent back for revision at the earliest chance.”

Advocates of the 2011 translation of the Roman Missal have excused the infelicities of the English by claiming that it does believers good to wrestle with and puzzle over the prayers. Some have gone so far as to argue that the prayers ought to sound awkward. Their gracelessness in English reminds us we don’t have the “real” thing, after all, which is the liturgy in Latin. This way of thinking, however, is completely at odds with the process Pope Francis is talking about—which arose from the Council and has progressed since that time—one that foresees vernacular languages coming into their own as liturgical languages, with an elegance and richness proper to them.

Translation committees in various languages all over the world have expended a tremendous amount of energy—often against their better judgment—attempting to follow Liturgiam authenticam to the letter, because they knew that anything less would be rejected by Rome. The International Commission on English in the Liturgy (ICEL) has labored mightily to conform to it exactly. Indeed, a committee called Vox Clara was appointed by Rome to serve as a watchdog enforcing strict conformity to that instruction in English. Francis, however, says that all instructions exist as “general guidelines” that must be followed “as far as possible”—a description which suggests room for interpretation. After the motu proprio appeared, canonists observed that Liturgiam authenticam remains in force (though it will need to be revised to reflect the change in the Code of Canon Law that Francis decreed). Yet Francis seems to be broadening the space for pastoral judgment in the meantime, even before a new version of Liturgiam authenticam appears. If, as Francis says, “fidelity” is not to be judged by individual words but by the entire communicative act, we cannot continue to insist on the literal, word-for-word approach that Liturgiam authenticam embodies.

When Francis speaks of the sense of the original text being “fully and faithfully rendered,” he includes accompanying conditions. Foremost is pastoral concern: “Without doubt, attention must be paid to the benefit and good of the faithful.” He also charges the bishops’ conferences to safeguard “the character of each language” while providing a full and faithful translation. When these concerns—pastoral and linguistic—come into conflict with Liturgiam authenticam, as they will, a judgment call is required. The bishops using these “general guidelines” must take responsibility and make decisions.

The motu proprio ends by saying “Everything that I have decreed in this Apostolic Letter issued Motu Proprio must be observed in all its parts.” It is therefore important to consider everything Francis says here—not only the textual changes that he makes to Canon 838. Magnum principium should affect the translations which are already underway, and any future translations as well. His motu proprio, taken as a whole, opens up new possibilities for more responsive and indeed more “faithful” translations.