Faith on the Front 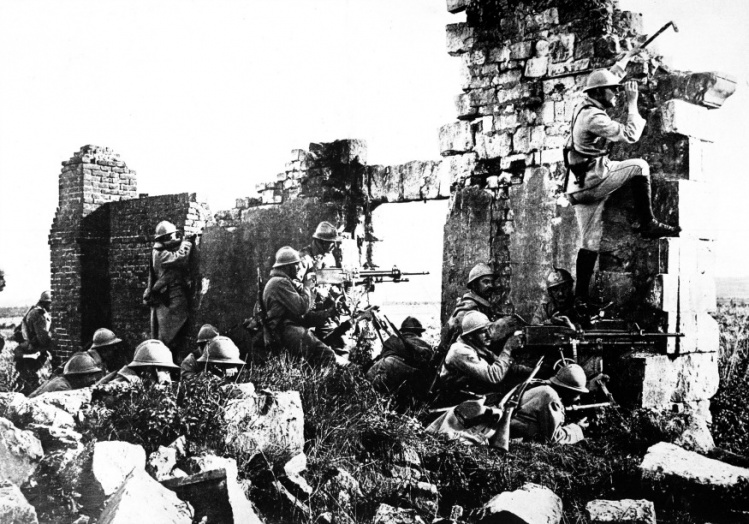 The French writer Henri Ghéon (1875–1944) remembers evenings in the mess hall in Belgium in 1915, not far from the trenches and the medieval city of Ypres that by the end of the First World War would be shelled to the ground: “We amused ourselves like fools with two model trains running on a table, with switchings, derailments, and collisions.” And on New Year’s Eve, in the Grand Hotel of Nieuport-Bains, there was foie gras, champagne, cake, light music and laughter. Exempted from military service, Ghéon could have served elsewhere, but he chose to be a Red Cross doctor at the front, he writes, “out of curiosity, out of vanity, to be able to say, ‘I was there.’”

Ghéon’s rare book, Born in Battle (L’homme né de la guerre): The Testimony of a Convert (Yser-Artois 1915), has recently materialized out of the mists of the Great War as a digitized version from the collections of the University of Michigan Library. Like the battlefields it describes, it has the faded, fitful appearance of an old newsreel, but not even an unedited digital scan of the French text can diminish the religious rebirth the author narrates.

For Ghéon had lost his faith—and made it known to his mother—at about the age of fifteen. It is a Sunday, he is dawdling downstairs, it is time to leave for church, his mother, upstairs, keeps calling to him. “We’re already late,” she says, “you’re going to miss Mass.” Coming upstairs, he replies, “I’m not going,” adding quickly, not giving his mother the chance to say anything, “I no longer believe.” It was like a knife in the heart of the believer he loved, he recalls, in a family where his father, an unbeliever, seemed to have meant little to him.

When war broke out in 1914, Ghéon had already made a name for himself as a critic and an essayist. He believed then, he writes, in the cult of art, “a kind of earthly eternity.” Although he admired such Catholic writers as Paul Claudel and Charles Péguy, he felt no need to follow them: “They simply accustomed me to a point of view that remained foreign to me.”

Among his friends in Paris was André Gide, a Protestant by upbringing and a protestant in literature and life, and one of France’s most influential modern writers. Learning of Ghéon’s departure for the Belgian front, Gide told him to look up a man by the name of Pierre Dupouey. The advice was to change Ghéon’s life forever.

Captain Pierre Dupouey was a man inspired and an inspiration to others—his fellow officers, the men he commanded, and the chaplains who knew him. Ghéon saw Dupouey only three times and was immediately captivated by his personality, for Dupouey loved distant lands, deserts, poetry, and adventure. Short and stocky, with a dark beard, his looks surprised Ghéon, but their first brief stroll in the dunes (with a battle raging) in late January 1915 was a revelation. No man he had ever known, he writes, seemed more assured of what he was saying—it was in the sound of his voice and in his few but well-chosen words. Three days later, at their second meeting, Dupouey, the proud father, showed him a photo of his fat-cheeked baby son, yet later that day remarked, “I love this life, even the sand, with the sea at one’s feet, the sun reflected everything.... It’s too bad that the Boches are lobbing their bits of trash at our heads.” The third and last time they met was a rainy day in late February. Easter was not far away. Walking through an almost deserted town of destroyed and damaged buildings, Dupouey stopped to buy eau de cologne in one of the few open shops, then unexpectedly said that he was developing an “immoderate liking for ruins. Don’t you think it’s disturbing?” And they laughed. But Dupouey was suddenly alone with his thoughts, as if Ghéon were not there.

On Holy Saturday night, Ghéon later learns, a stray round struck Dupouey in the forehead. “I didn’t know his religion,” he writes, “I didn’t know if he was religious.” It was only later that a chaplain told him that Dupouey had spoken of how magnificent Easter was to him and that he wanted to serve Mass for him that Easter Sunday. “He saw death coming,” the chaplain said, “and the closer it got the less he seemed to fear it.”

Dupouey’s character had provided the spark, but Ghéon was cautious, as if he was on a patrol in the murderous Belgian dunes and polders. He began a correspondence with Dupouey’s widow in Toulon that increased his admiration for the man but not for his religion. He tells how, two days before Dupouey’s death, he entered a church as a social call—“to pay a visit to the God of his country.” Another day he writes to Gide that he prays for Dupouey “without believing...to believe for others, not believing myself.” He goes to Sunday Mass by himself, “as a spectator,” he writes, but something is stirring within. On the eve of a battle, he says, for the first time in twenty-five years, the first prayer he learned as a child, the Our Father. Yet shortly before he returns to the church, he almost angrily says he will go to God “in spite of his priests.” He reads Voltaire and describes the chaos around him, including the disturbing sight of a wounded British soldier walking back from battle naked except for his helmet. On Christmas Eve 1915 he receives communion and his confessor tells him that he must receive the Eucharist simply and modestly, like most people. “It’s our daily bread.... Its effect is slow but lasting.” Only the greatest saints, he is warned, experience a kind of bliss on earth.

We are far from the Second World War admonition that there are no atheists in the foxholes. “Two years have passed,” Ghéon writes in the epilogue to his book, which was written at Verdun and in Lorraine from July to December 1917, “and the war persists. I have seen it up close and at its worst on the Aisne and the Marne; I have lost good friends; death has not gone away and still poses a question that needs to be resolved. Nothing has been able to alter the certitude and the faith in my soul.”

After Dupouey’s death Ghéon had sought out the church cemetery in Coxyde-Ville where he was buried. A wooden cross, a date—April 3, 1915—and artificial flowers with the words: “To Our Captain.” An end and a beginning.