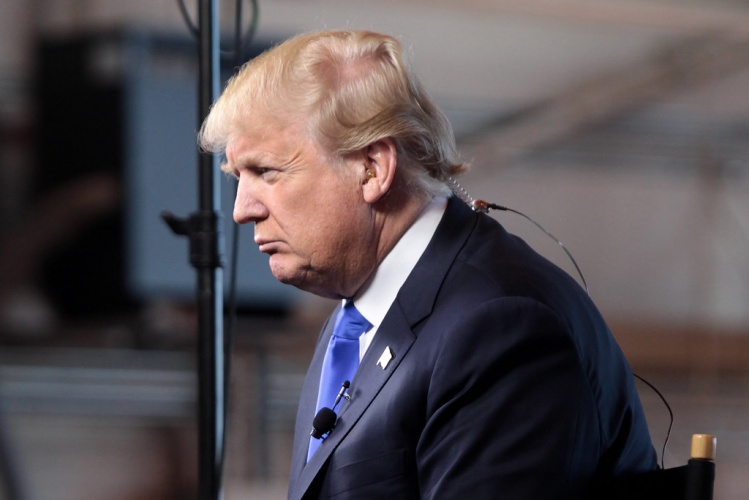 There are two paths for holding President Trump to account for his abuses: one passes through the Senate, the other through the ballot box. With Trump declaring he’ll do everything he can to obstruct House impeachment efforts, his opponents need to keep both options in mind as they move to overcome his obstruction, his lying, and his increasingly unhinged behavior.

One road seemed entirely impassable until Trump’s July 25 call with Ukraine’s president became public: Even if the House passed one or more impeachment articles, no one could believe that enough Republican senators would turn on him to remove him from office. Now, that possibility has gone from being a laughable impossibility to a just-barely-conceivable long shot.

It’s a plausible if still-unlikely path because so many Republican senators have either been silent or responded to recent events with word salads that provide Trump with little comfort. It’s also plausible because a sizable minority of the Republican rank-and-file are abandoning the president. A Washington Post-Schar School poll last week found 28 percent of Republicans supporting the House impeachment inquiry while an astonishing 18 percent said they favor removing Trump from office. Mr. I-Only-Care-About-the-Base must be petrified that a chunk of that base doesn’t care about him.

Trump has never been in as weak a position as he finds himself in now. This helps explain the scorched-earth letter from White House counsel Pat Cipollone on Tuesday effectively telling one popularly elected house of Congress to go stuff it. In what New York magazine’s Jonathan Chait described as a “deranged, quasi-legal rant,” Cipollone ludicrously claimed that the House inquiry “lacks any legitimate constitutional foundation.”

The president is aware that if he loses too many Republicans, he loses everything. He thus moved Wednesday morning to cast the fight entirely in partisan terms. “The Do Nothing Democrats are Con Artists, only looking to hurt the Republican Party and President,” he tweeted. “Their total focus is 2020, nothing more, and nothing less. The good news is that WE WILL WIN!!!!” Presumably he hopes those capital letters and four exclamation points will inspire his one-time allies to put their blinders back on.

Presumably he hopes those capital letters and four exclamation points will inspire his one-time allies to put their blinders back on.
sharetweet

He also wants to remind Republican senators, especially those from states where he is strong, that he can cause them a lot of pain. Assuming the House votes for impeachment, Trump needs 34 senators to block his removal from office. And exactly 34 senators come from states where he secured 56 percent of the vote or more in 2016. Three of them are Democrats, which would bring him down to 31 if only Republicans support him. But add in the four Republicans from South Carolina and Texas and Trump is at 35.

That’s hardly a comfortable margin, but it’s enough. Those 35 are Trump’s front line and it’s why nasty, angry hyper-partisanship will be at the heart of everything he does from now on.

This number must also be on the minds of House Democrats. It defines how steep the climb toward Trump’s removal will be. This means they have to keep a steady eye on the impact of everything they do on November 2020 and the judgments that citizens far from the nation’s capital will be making.

No matter how much Trump baits them, congressional Democrats thus have to combine toughness with sobriety. Given Trump’s patent abuses, the facts are their friends. The nation, judging from the polls, is moving in their direction. This is not the result of any flights of rhetorical genius or brilliant political strategy. It’s happening because the more voters (including Republicans) know about what Trump actually did, the more they realize how unfit he is to be president. The higher the ratio of facts to rhetoric, the worse it is for Trump.

He surely knows this, which is why he is trying to starve the inquiry of further information. He wants a fight over process to obscure his actions. He hopes to cast himself as defender of the voters’—or, more precisely, the Electoral College’s—2016 will.

Of course House Democrats must fight Trump’s obstruction. But they cannot let him entangle them in abstruse debates over procedures. Their legitimate anger over the corrupt absurdity of the president’s claims should not move them toward theatrical excesses that will only give Trump more openings for deflection and evasion.

And they must bear in mind that the final jury in The People v. Trump is still more likely to be an informed electorate than a supine and fearful United States Senate.