Democrats Should Focus on Who Can Win
By E. J. Dionne Jr.
Election 2020
Donald Trump 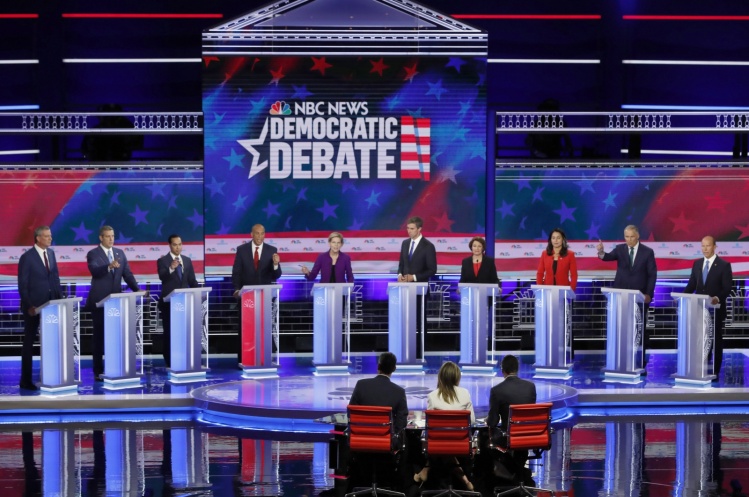 It has become a habit to scold Democratic voters who say that electability is their standard in deciding whom to support for their party’s presidential nomination. Forecasts made hours before Election Day three years ago went spectacularly awry, so who can know what will happen in November 2020?

Yet like it or not, the most important watchers of the Democratic debate on Thursday will be electability voters, who happen to constitute a majority of the party. And they are right to believe that the priority in 2020 is defeating President Trump. A man who invents the trajectory of a hurricane is not exactly someone whom we should entrust with four more years of power.

Still, if the question of who can win is a constant, the dynamic going into this encounter is very different from that of July’s faceoffs—and not just because ten candidates who were there before will be missing. Rather quickly, the Democratic presidential race has come down to three candidates, and then everyone else.

The battle for supremacy is between former Vice President Joe Biden and Massachusetts Sen. Elizabeth Warren, with Vermont Sen. Bernie Sanders holding on to his loyalists but having trouble reaching beyond them. The seven others will have to decide which of these three they most want to bring down.

Warren has had by far the best year of anyone. This makes her a target in a way she wasn’t before. She profited from not sharing the stage with Biden in the first two debate rounds, insulating her from the fractiousness that was directed initially toward the front-runner but eventually engulfed nearly everyone in the vicinity. Warren thus had the freedom to highlight her impressive list of policy proposals and to look—to use another much-debated word—“presidential.”

Warren has one big, if amorphous, task: to persuade doubters that she can beat Trump.
sharetweet

Warren’s supporters have been the sharpest critics of the electability test because it is often used against her. The doubts about whether she can beat Trump are sometimes expressed in ideological terms (“she’s too left”) and, much more guardedly, about who she is. Can a Harvard professor win Pennsylvania or Wisconsin? Could the sexism that helped undermine Hillary Clinton also undercut Warren?

Please hold your fire. I know that bringing up the issue of sexism risks engaging in it. There are multiple reasons Clinton lost, and putting all women candidates in the same category is sexism. Nonetheless, anyone who has discussed the campaign with Democratic voters knows they are asking this question, almost always guiltily.

Warren therefore has one big, if amorphous, task: to persuade doubters that she can beat Trump. How do we know this? A fascinating poll in June by the Democratic data firm Avalanche found Biden ahead with 29 percent to 17 pecent for Sanders and 16 percent for Warren. But when the same voters were asked who they would make president with a “magic wand,” 21 percent picked Warren, with Biden and Sanders getting 19 percent each. The bottom line: If Democrats think she can win next November, she can win primary and caucus contests in February and March.

Biden’s ten-point gap on these two questions underscores why he needs a commanding performance this week. His key assets are the fact that he continues to enjoy the biggest leads in polling matchups with Trump and the sense that he is well-placed to carry Michigan, Wisconsin and Pennsylvania. But Biden’s less-than-stellar debate outings (particularly in June) and various missteps that inevitably get a lot of media attention have raised questions about his general-election prospects. Easing those doubts is his one and only job.

For Sanders, the question is whether he can break out beyond his seemingly rock-solid base of loyalists. A “New Bernie” is both an impossibility and a bad idea for his brand as a conviction politician. But he won’t win unless he can expand his market share, a phrase I use with apologies to all democratic socialists.

The take I have offered leaves out “everyone else,” which is in one sense unfair. California Sen. Kamala Harris and South Bend Mayor Pete Buttigieg are within striking distance of getting into the top three, and someone among Thursday’s remaining five could catch a break if one of the current leaders falters.

But that is the point: For now, nearly two-thirds of Democrats support one of the three leaders. And things are likely to stay that way if Sanders’ devoted band keeps the faith—and if Biden and Warren persuade Democrats that they can, indeed, throw the world’s most inept meteorologist out of the White House.