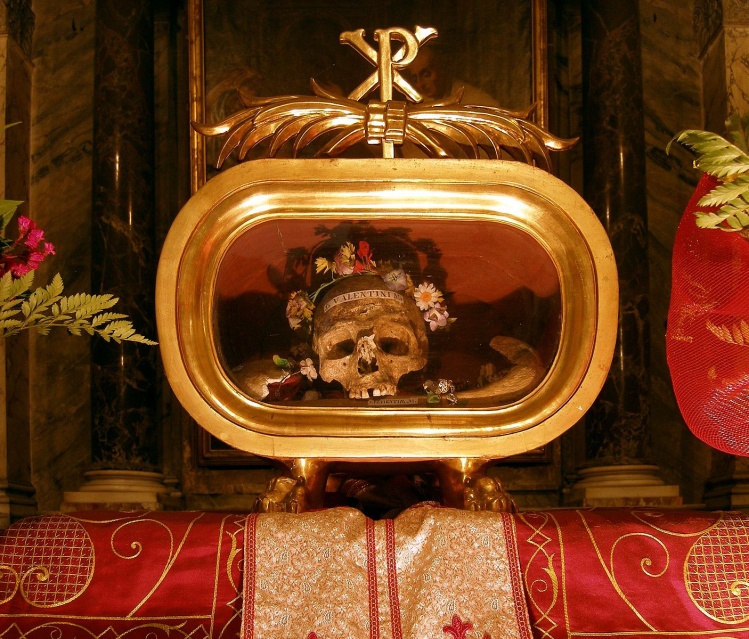 Reliquary containing the skull of St. Valentine at the Church of Santa Maria in Cosmedin in Rome (Dnalor 01)

The volume under review, beautifully written by Eamon Duffy, the distinguished Cambridge historian probably best known for his masterly The Stripping of the Altars: Traditional Religion in England 1400–1580, consists of a collection of some twenty “essays in medieval Christianity” with a particular emphasis on the forms of Christian living prevalent during the late-medieval centuries among English men and women. The subjects that these essays address are intriguingly disparate in nature. They range from such topics as “Books Held by Kings” to “Lucas Cranach the Elder,” from “Provision against Purgatory” to “The Cult of ‘St.’ Henry VI,” from “Sacred Bones and Blood” to “Histories of Childhood,” or “Psalms and Lay Piety,” or “Monasticism and the Religion of the People.” Such topics may strike the general reader as a bit recondite. But the essays are all written, in fact, not with professional medievalists in mind but the general educated reader. And it is worthy of note that most were originally published not in the scholarly journals but in such general-interest publications as the Guardian, the London Review of Books, and (most frequently) the New York Review of Books. They are written, moreover, by a scholar blessed with the ability to mediate to the general public quite demanding and intricate historical material and to do so with an admirable degree of lucidity. They make interesting and sometimes compelling reading, punctuated as they are by unexpected matters of fact and by counterintuitive interpretative turns.

We learn, for example, in the course of a discussion about the different statuses accorded across the centuries to the scroll and the codex, that the book roll “symbolized Formality” and “cultural, literary and scientific worth” to such a degree that, as late as 1849, official copies of the British Acts of Parliament were still inscribed in parchment rolls. Or, again, that the cult of the unfortunate Henry VI of England was the fastest-growing saintly cult on the eve of the English Reformation. Or, yet again, that it wasn’t until the late sixteenth century that the second half of the modern Hail Mary—“Holy Mary, Mother of God, pray for us sinners now and at the hour of our death”—was added. Similarly, we learn that our quasi-routine assumption that the ghastly ravages of the Black Death in the mid-fourteenth century had to have intensified dramatically the fear of purgatorial punishment after sudden death, and therefore accounted for the astonishing multiplication of Masses said for the dead, may well be a questionable one. For it turns out that the great late-medieval surge of chantry-building (chantries being, in effect, Mass factories) was well underway—perhaps even beginning to crest—in the years prior to the Black Death. “Intercession for the Dead,” Duffy insists, “was less like fire-insurance than the extension of the obligations of family and neighbours to the world of the dead.... [It] helped domesticate death rather than making it more terrible.”

The variety of the topics addressed in these essays notwithstanding, they do share a couple of important features. First, they clearly reflect a recent shift in the preoccupations characteristic of medieval-historical scholarship—a shift away from any single melodic line in favor of a more polyphonic or pluralistic engagement with the field. Leading historians have come to think less in terms of Christianity than in terms of “Christianities” in the plural, or of “micro-Christianities” often radically different from one another. Hence the tendency to step away from the older preoccupation with doctrinal debates and the institutional doings of popes, bishops, and kings, and to focus instead on the study of Christianity as, above all, a set of religious practices. Or, as Duffy describes them, “the religious strategies adopted by the people of the past to make sense of their daily existence.”

As an incarnational religion, Christianity has also been a materialistic one, discerning in the material elements of the sacraments nothing less than the outward signs of an inward divine grace.
sharetweet

Duffy addresses this development most directly in an essay titled “Sacred Bones and Blood.” Here he begins by describing Catholicism as “the most unabashedly materialist form of Christianity.” He does so advisedly. In its emphasis on the sacrament as the indispensable vehicle of divine grace, and on the deployment in devotional practice of “sacramentals”—objects that come through ritual blessing to be in some sense sacred: medals, crucifixes, holy water, rosary beads, holy images—the Catholic tradition has always seen the power of God as susceptible to being channeled through matter such as bread, wine, salt, human gesture, and touch. It is true that, in the case of images, it has tended to portray them as only teaching tools or as aids to excite devotion. They were intended not to contain the divine, but to direct attention toward it. The trouble is that even those ecclesiastics who in the later Middle Ages gave voice to that point of view (still the dominant one) frequently betrayed a destabilizing measure of ambivalence. They did so in their attitude not only toward images, relics, and other types of holy matter, but also toward those instances of dynamic material transformation (bleeding hosts, liquefying blood, images that moved) that were in their day so dramatically multiplying. They seem to have been unable, despite themselves, to avoid attributing some sort of vitality, agency, or direct spiritual potency to the holy materials themselves. And here one should note the pertinence of the insights of art historians like Hans Belting and Herbert Kessler, who have dwelt intriguingly on the medieval conflation of the holy representation with the numinous thing itself. Duffy dwells on all of this at some length, emphasizing the degree to which the later Middle Ages, certainly a period of deepening spiritual interiority, was also, if paradoxically, the period of most intense materiality—one in which matter was seen as somehow partaking of the divine or disclosing its Creator.

Duffy goes on to conclude that “times have changed, clerical nerve has failed and modern Catholicism appears to be in two minds about the spiritual potency of even sanctified matter.” Blessed palm branches may still be distributed on Palm Sunday but, in contrast with pre–Vatican II days, the current formula of blessing steers well clear of implying that the blessing of the palms “has any objective sanctifying effect on them or on their bearers. It has become no more than a ritual gesture that is assigned no instrumental value at all.” Films about exorcism may do well at the box office, but it no longer seems wise to attribute some inherent sacral potency to holy water. Today we have much more trouble imagining that mere stuff could be sacred.