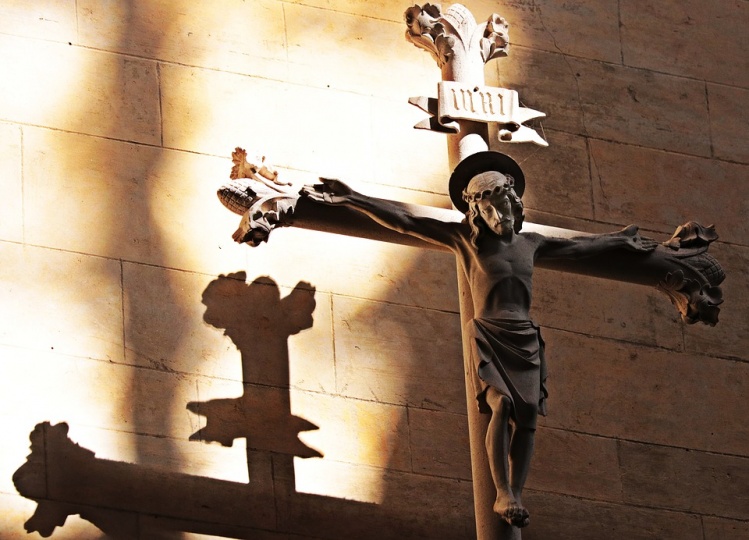 Their names are the outliers among all the Jerrys and Margarets of my Catholic family: my little sisters Khushi and Vaishnavi, both adopted from India. Khushi came to us in Falls Church, Virginia, when she was a year old, and grew up like any suburban American kid might. Vaishnavi arrived when she was seven, speaking Marathi and a little bit of English and bringing with her a short lifetime of Indian culture and religious tradition, from offerings to household deities and celebrations of festivals like Diwali. Her name means “worshipper of Vishnu.”

I and most of my family were born into Catholicism. Its rituals are an unquestioned part of our life. Communion at Mass, prayers before dinner and before bed, countless confirmations. How could we incorporate Vaishnavi into our faith without forcing it upon her or overwhelming her with doctrine?

Our family attends Holy Trinity Church, a Jesuit parish in Georgetown. Sunday morning often saw us tumbling out of our red van and making a beeline for the last pew in the back, cutting off the priest as he was about to process up the aisle. I usually found myself squished next to Vaishnavi. She and Khushi were usually two of only several brown faces amidst a sea of overwhelmingly white families, and we tried to make them feel welcome. So I would often goof around with Vaish during the service: squeezing her hand too hard during the “Our Father,” giving her a sloppy kiss along with my “peace be with you,” taking her on as many bathroom breaks as she liked. It was my attempt to say “I know this is all a bit strange, but you don’t have to be intimidated.”

All this I did in the hope that she would feel comfortable at church. I’d furtively glance at her face, searching for any indication that she was affected by the homily or ceremony. Like many of us did as children, she started to bring a pencil case and stack of blank papers to Mass. She would sketch out silly and unflattering pictures of different family members and pass them down the pew, knowing she’d get muffled laughter from at least several of us.

It was my attempt to say “I know this is all a bit strange, but you don’t have to be intimidated.”
sharetweet

Vaishnavi’s drawing continued as the months passed. We’d arrive at Holy Trinity, dash into the pew, and before our coats were off Vaishnavi would be bent over her papers. I had never really paid attention to what she might be drawing. Then at one Mass, for whatever reason, I decided to watch.

Starting at the top center of the page, she meticulously drew a series of straight lines. If a line wavered, she would erase it. Faint, hardly discernible pencil tracings were followed by a darker outline. Rubber shavings fell near my feet as she drew, erased, re-drew, and erased again. As she connected two of the lines into a ninety degree angle, the image struck me for the first time.

It was the cross. A three-dimensional, shaded, twelve-inch long rendering of the cross that hung behind the altar. “INRI” scratched darkly into the page.

She saw me looking at the drawing, smiled, handed it to me, and started the same drawing on a new sheet of paper. Six years later, at thirteen years old, Vaishnavi still draws and redraws the cross. I’m not sure where all these sketches end up. She gives some to me; I have them on my bulletin board, in desk drawers, between the pages of books.

I’ve never asked her what brings her back to that same image every week. I know it’s not the textbook theological understanding of the symbol. Our family simply goes to church. My sister and I sit next to each other, and something within the cross keeps speaking to her.