The truth is, we’re all struggling to cope.
By Mollie Wilson O'Reilly
Coronavirus
Education
U.S. Catholicism 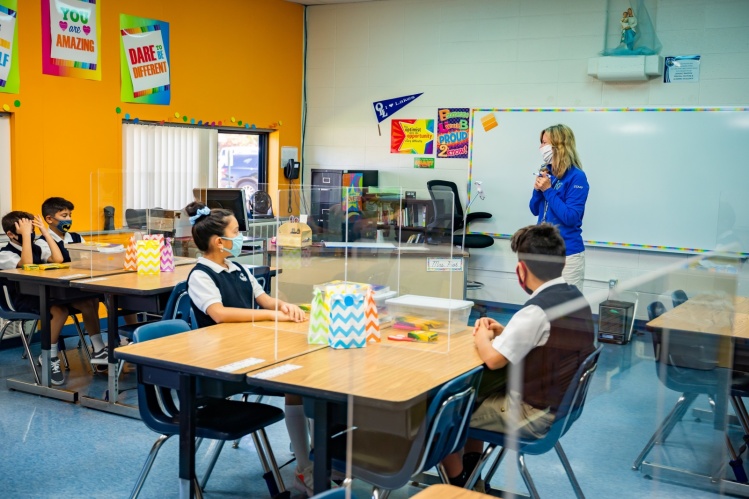 A teacher at Our Lady of the Lakes Elementary School in Waterford, Michigan, talks to masked students, August 25, 2020. (CNS photo/Valaurian Waller, Detroit Catholic)

This fall, at long last, my dream is coming true: my youngest child is off to school with his big brothers. I never imagined they’d be wearing masks and having their temperatures checked at the door, but after six months stuck at home, we’re grateful school is happening at all.

The Catholic school my kids attend has a big-enough building and small-enough classes to meet social-distancing requirements. It also has a dedicated faculty, staff, and principal who spent the summer months scrambling to stay abreast of ever-shifting guidelines in preparation for offering full-time instruction both in person and online. I am thankful for their efforts and proud of all the work diocesan schools are doing to serve families. But I must object to that work being used to disparage the public-school system and its employees, or to paint too rosy a picture of the progress our country has made in combating COVID-19.

On September 2, the New York Post ran a photo of a Catholic school classroom on its cover. The students’ empty desks are surrounded by see-through barriers. “Outclassed Again,” the headline says. “De Blasio delays school openings, as Queens Catholic academy is ready to go.” Ten days later, alongside a photo of children in Catholic school plaid, the Post published an editorial: “Here’s what functional NYC school systems look like—and it puts DOE to shame.”

The paper’s jeering coverage of public education consistently ignores the reasons Catholic schools are able to “function” when public schools cannot. Public schools are obligated to serve all comers and to provide transportation when necessary. The “social distancing” that everyone hopes will make in-school learning safe is impossible to achieve in a crowded building or on a full school bus. And providing virtual instruction to such a vast body of students requires sorting through a bewildering array of variables (for one thing, many children lack reliable at-home internet access; some public-school students lack homes, period). It is highly dishonest for the New York Post to ignore all those factors and hold up Catholic schools as an example of “how leaders who actually put education first can handle the challenge of restarting schools amidst a pandemic”—especially when you consider that the Archdiocese of New York permanently closed twenty of its schools in July.

Diocesan school leaders can’t control the angle of press coverage like this. But they should be wary of embracing it. That September 12 editorial heckling the Department of Education included this egregious smear: “At Immaculate Conception School in the Bronx, an industrious maintenance worker roamed the halls wiping doorknobs, staircase rails, walls, hallways and other contact points. At regular city schools, custodians are grumbling about having to skip their second jobs and fishing trips to sanitize their buildings.” I read it by following a link from the official Twitter account of the Archdiocese of New York Catholic Schools, where it was shared with the comment, “This @nypost editorial says it all.”

I can’t comment on the soundness of the decisions being made by the New York City Department of Education. But I know who I see using the pandemic to stuff their pockets, and it isn’t fat-cat maintenance workers. The Post’s implication that public-school educators are unconcerned with their students’ wellbeing is disgraceful. And while it is true that Catholic schools can be a lifeline for students served poorly by public education, I have also known families who have moved their children out of Catholic schools because the public system provides—is required to provide—services for learning disabilities and other special needs that Catholic schools can’t always accommodate. “Putting education first” is not as simple as it sounds.

Catholics should be standing in solidarity with all our neighbors as we do our best to cope with this crisis. We degrade our witness when we allow Catholic schools to be used in a propaganda campaign against public services—or against an honest reckoning with the facts. As the 2020 election approaches, conservatives are eager to exploit the Catholic school success story to advance the claim—let’s call it what it is, a conspiracy theory—that liberals are dishonestly playing up the threat of COVID-19 to make President Donald Trump look bad.

The truth is, my kids and their schoolmates are part of a broad experiment to find out whether masks and distancing and all the other safeguards in place are enough to prevent the spread of the virus. All of us, public and private, parents, teachers, and administrators, are looking for the best way forward in a highly unstable situation. That situation is not the fault of teachers’ unions, or lazy public-school janitors, or even (despite his many sins) Bill de Blasio. It is a direct consequence of the reprehensible failure of the Trump administration to protect Americans from COVID-19. We are all still scrambling, months after schools first shut down in March, because we have inadequate testing and tracing, no national recovery plan, and a president who undermines public trust and sneers at his opponent for wearing a mask. The real scandal we’re all facing isn’t the lack of a functional school system. It’s the lack of a functional federal government.