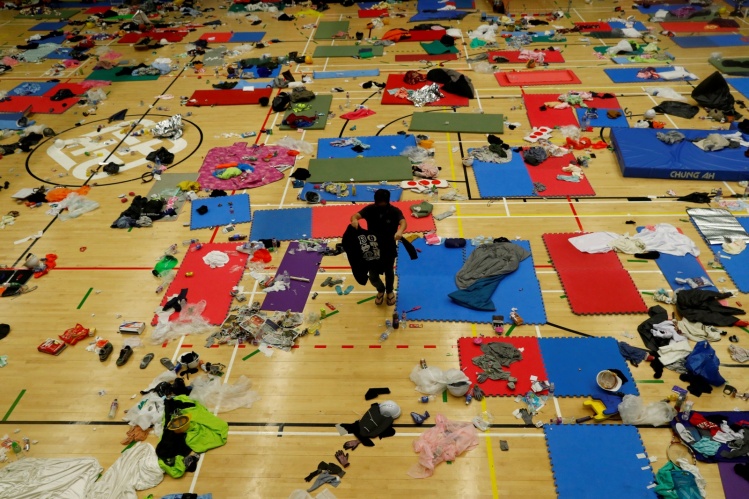 A protester looks for clothes in a gym hall which served as a sleeping area on the campus of the Hong Kong Polytechnic University Nov.19, 2019, during ongoing protests. (CNS photo/Thomas Peter, Reuters)

Five months after Hong Kong citizens first took to the streets to protest an extradition bill proposed by the government of mainland China, they show little sign of giving up. If anything, what began as a peaceful movement in support of civil liberties has transformed into a larger, sustained campaign against Chinese oppression. Accordingly, clashes between protestors and law enforcement have grown more frequent and more violent, as demonstrators try to defend themselves against tear gas, rubber bullets, and live rounds. Hundreds of activists trapped inside the Hong Kong Polytechnic University found themselves under siege by police using water cannons loaded with skin-burning chemicals. CNN’s James Griffiths has observed that, in contrast to the optimism of the 2014 Umbrella Movement, this year’s protests seem marked by desperation, the sense that this may be Hong Kong’s last chance to freely chart its own future.

Judging from the wave of mass popular protests around the world in 2019, desperation seems to have set in among the people of many countries, including some that have not made international news. In Chile, a hike in public-transit fees sparked demonstrations that forced the government to cancel two major international summits. In Lebanon, a tax on internet calls through services like WhatsApp unleashed the largest anti-government protests in fifteen years. In Ecuador, the elimination of fuel subsidies spurred indigenous-led protests that forced the government to flee the capital city of Quito. In Sudan, women protesting a rise in the price of bread helped ignite a revolution that brought down the government of Omar al-Bashir. The list goes on: Albania, Algeria, Bolivia, Catalonia, Egypt, France, Gaza, Georgia, Haiti, Indonesia, Iran, Iraq, Montenegro, the Papua provinces of Indonesia, Puerto Rico, Pakistan, Peru, Romania, Russia, Uganda, and Zimbabwe have all seen sustained mass protests this year.

For too many Americans, the “healthy economy” actually exerts a painful toll.
sharetweet

In one sense, this might be viewed as the continuation of a long-term pattern. Since World War II, the number of mass public protests around the world has grown every year. And for many years, these nonviolent, civil uprisings often met with success. Harvard political scientist Erica Chenowith estimates that twenty years ago, 70 percent of protest movements seeking systemic political change achieved their aims. But starting in the mid-2000s, that rate fell to 30 percent. Chenowith suggests that as governments have deployed new strategies for stifling dissent—from infiltrating protest movements and buying elite support to implementing surveillance technologies and intimidating journalists—they’ve been able to counter the effectiveness of nonviolent protest. And just as grassroot and activist movements share their methods and tactics internationally in solidarity with the like-minded, so have governments and law-enforcement authorities collaborated with one another across borders, thus strengthening their ability to quash popular unrest.

Still, 2019 seems unusual for the number and scale of protests, and for how long popular movements have been willing and able to sustain the fight. Some might search for a common political thread to explain this phenomenon—is this the coordinated left-leaning global revolution we’ve been waiting for?—but something much more elemental seems to be at work. It should be noted that many of the demonstrations around the world originated as protests against austerity policies and seemingly small-bore economic measures, like raising transit fees or imposing tariffs on texting. And this has been the case both in countries that are generally considered impoverished and in those where citizens are thought to be “doing well.” Economists praise Chile as a success story of neoliberalism, but it is one of the most unequal of the world’s industrialized countries. In the past decade, wages have risen and poverty has decreased, but most Chileans struggle with the cost of living. And in France, where yellow-vest protests are entering their second year, the income of the ultra-wealthy has for decades been rising at triple the rate of almost everyone else, especially those in rural areas.

What these and other examples suggest is that traditional indicators of economic health—low unemployment, high stock prices, solid GDP—fail to reflect the impact of stagnant wages and the yawning gap between rich and poor. Consider, in fact, the United States, where income inequality is now at a fifty-year high, and where economic policy is tailored to benefit corporations and the wealthy. For too many Americans, the “healthy economy” actually exerts a painful toll. We might draw inspiration from the actions of millions of ordinary people around the world to bring focused and sustained attention to the reality here at home.