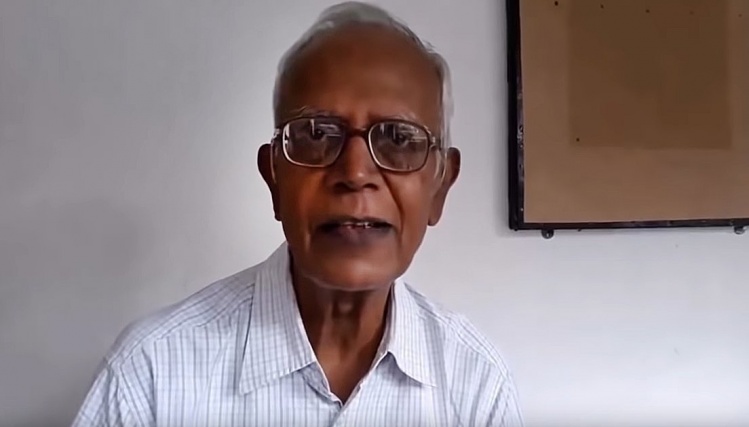 The Jesuit priest Fr. Stan Swamy died while in police custody in India on July 5. He had been arrested for terrorist activities, a charge both he and those who knew him categorically denied. A lifelong advocate for peace and nonviolent direct action, Swamy was best known for his devotion to human rights, especially for India’s adivasis (aboriginals), Dalits (formerly known as “untouchables”), and the rural poor.

Liberation theology, already well established in Latin America, had been applied to a Dalit theology by the time I moved to India in 1981. One of its principal proponents was Fr. Stan. He was a friend of Dom Hélder Câmara and Paulo Freire and had been deeply influenced by their work. My husband and I traveled to the south Indian city of Bangalore to meet him a few months after our arrival in India.

Bangalore was considered the “garden city” in those days, and we sat with Fr. Stan on the beautiful green lawns of the Indian Social Institute, a Jesuit-run research and training center, which he headed at that time. It was too comfortable for his tastes and he was frustrated at having to remain there. “I belong in the villages,” I remember him saying.

A few years later, at the age of fifty-five—a time when most people are starting to plan for retirement—Fr. Stan was reassigned to southern Bihar, one of India’s poorest areas. (It would later become the separate state of Jharkhand.) There he remained for the rest of his life, working tirelessly in extremely difficult circumstances with landless laborers and Dalit farmers.

In 2018, Swamy, along with several other activists, became the subject of a National Investigation Agency (NIA) probe into an incident that had taken place earlier that year in Bhima Koregaon, a village four hours south of Mumbai. In January, a demonstration commemorating the two-hundredth anniversary of a successful Dalit uprising turned violent. Upper-caste mobs were incensed because the event’s speakers had suggested that the same injustices against Dalits persisted today. At least one person was killed and much property was destroyed. Two well-known Hindu nationalists were charged with instigating the violence. One was arrested and later released; the other was never charged in spite of massive protests demanding his arrest. A few weeks later, a nineteen-year-old Dalit who had witnessed the violence died mysteriously; her brother, also a witness, was arrested on a charge of attempted murder. By the end of that year, nine eminent human-rights activists in their sixties and seventies had been imprisoned. In July 2018, it was Swamy’s turn, though he said he had never been to Bhima Koregaon in his life. He was questioned for several hours by local police and later again by NIA officials.

In a video he made following another interrogation in October 2020, Swamy calmly laid out the sequence of events. For him, what had happened had nothing to do with his movements prior to the Bhima Koregaon incident and everything to do with the systematic pillage of tribal (adivasi) lands by the government and corporations. Pointing to the role he had played over the past thirty years—in helping adivasis become aware of their rights, in filing public-interest litigations, and in fighting for the passage of pro-adivasi laws—Swamy concluded: “This created conflict with the state and they wanted me out of the way. One easy way to do it was to implicate me in some serious cases.”

In the end it was, as usual, the poor who saved the day.
sharetweet

During the interrogation, the officials produced reams of material they claimed had been extracted from Swamy’s own computer. An extensive investigation of this claim has been conducted by Arsenal Consulting, a digital-forensics firm near Boston. They’ve concluded that the material was planted by malware in another activist’s computer and then transferred to anyone that activist corresponded with, including Swamy.

At the end of the video, Swamy said he had been summoned to Mumbai for further questioning, but had refused to go. His age (eighty-three), his health (he had Parkinson’s and a heart condition), and the Covid pandemic all seemed good reasons for him not to travel. His video statement ends with these words:

What is happening to me is not unique, or happening to me alone. It is a broader process that is happening all over the country. We are all aware how prominent writers, lawyers, poets, activists, student leaders have all been put into jail because they have expressed their dissent or raised questions about the rulers of India. So I am a part of this process and I am happy to be a part of it. I am not a silent spectator. I’m part of the game and I am ready to pay the price, whatever it be.

A few days later, Swamy was arrested and flown to Mumbai, where he was imprisoned in the Taloja jail. The formal charge was sedition and contravention of the Unlawful Activities Prevention Act of 1967.

The Superior General of the Jesuits, the United Nations High Commissioner for Human Rights, cardinals, bishops, priests, and members of religious orders, as well as human-rights organizations and ordinary citizens throughout India and around the world, spoke out in defence of Swamy and the other activists. Demonstrations of solidarity demanding their immediate release were held all over the country. When these proved ineffective, the approach turned to palliative measures, especially for Fr. Stan, given his precarious health. We were particularly concerned that, because of his Parkinson’s, Stan was unable to hold a cup steady enough to drink from it. I, and many other disability activists here, sent several sippy cups to the prison. All of these were returned to their senders.

This little detail, more than anything else, brought home to me the petty vindictiveness of this arrest. Who would deny a sippy cup to an eighty-three-year-old priest living with Parkinson’s? In the end it was, as usual, the poor who saved the day. In one of his last letters from jail, Swamy spoke movingly of the help he received from his fellow inmates: poor and illiterate, they had no difficulty understanding what it means to be human. They spoon-fed Fr. Stan, held the cup to his lips, supported him to get to the toilet, and bathed him when he was unable to do it for himself. “We still sing in chorus,” he wrote in his letter. “A caged bird can still sing.”

When, as seemed inevitable, he contracted Covid, he was finally removed to a Mumbai hospital where, though chained to his bed as required by law, he finally got the care he had been denied in prison. But by then it was too late. Hooked to a ventilator, he died of cardiac arrest on July 5.

The thanks Fr. Stan Swamy got for a lifetime of defending the poor was to be treated exactly like one of them at the end. In India’s current climate of ruthless suppression of dissent, the example of his mistreatment may be seen as a warning to others. Paradoxically, however, many here find hope and inspiration in his story. A legal case challenging the violation of Fr. Stan’s human rights is now being planned, and his death has already made more people aware of the injustice the poor live with every day in this country. Christina Samy, who was trained by Fr. Stan and went on to become a full-time human-rights activist, put it well: “Living, Stan was a challenge to the status quo. In his death, he is even more so.”