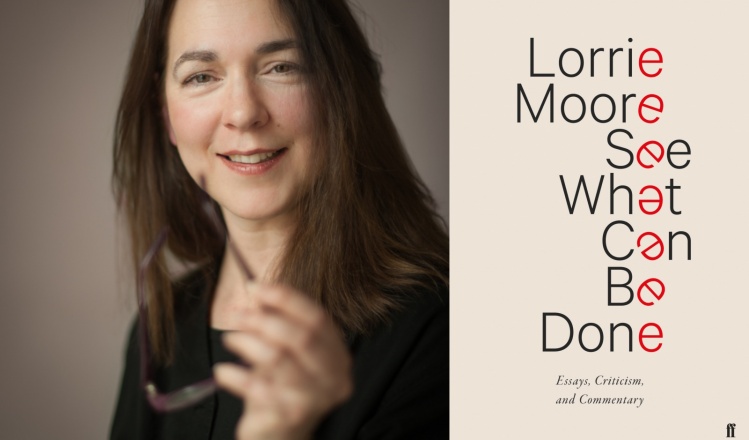 The enticement of the short essay, especially the review, is the focused, in-and-out nature of the reader’s experience: when I pick up one of my favorite short-form critics (Stuart Klawans, Dwight Garner, Peter Schjeldahl), I’m craving the latest art news in a quick dose of wit, clarity, and context. A collection of reviews is an entirely different type of enlightenment; a reader may be tempted to use it almost as a reference manual, sampling a little here, a little there. I was surprised and delighted, then, to find the celebrated fiction writer Lorrie Moore’s See What Can Be Done––a long, chronological compilation covering books, films, music, TV, and (for good measure) politics––engrossing enough to read straight through.

The sheer variety of works and subjects Moore covers (“thirty-four years of, well, stuff,” she says) surely has something to do with why the writing is so consistently stimulating. Moore approaches her subjects as a practitioner fascinated by her fellow artists, especially fiction writers, and takes them on their own terms. This contributes to the sense that each review is an experience as discrete as the work itself (she doesn't grant politicians the same courtesy, nor should she). She proclaims in her introduction that she “is not grounded in any philosophy or theory other than lack of philosophy or theory,” and indeed the reader never comes to dread the predictability of a self-proclaimed “ism.” Combined with her curiosity about how a work fits into its own literary or cinematic or musical times, Moore’s interest in fully revealing each work she discusses becomes a kind of guiding spirit. To read Moore on Jane Campion’s miniseries Top of the Lake is also to read Moore on Terrence Malick and Paul Thomas Anderson, to contemplate how one generation of idiosyncratic filmmakers has managed to thrive in the stultifying world of mass-market predictability.

The title of this collection comes from the assigning notes Moore received from Robert Silvers, the longtime editor of the New York Review of Books; many of the pieces also appeared in The New York Times, The New Yorker, and a slew of other high-profile magazines and anthologies. This range of venues results in varying lengths and tones, but Moore’s approach is invariably punchy and droll (if a few lines elicit groans, that’s what happens with thirty-four years of stuff). She is sublimely generous to her fellow writers and couches her minimal complaints in relativity. At the end of a long and admiring consideration of Ann Beattie’s New and Selected Stories, she asks: “Do the characters sometimes seem similar from story to story? The same can be said of every short-story writer who ever lived. Does the imaginative range seem limited? It is the same limited range Americans are so fond of calling Chekhovian.” And then the signature Moore zinger: “Is every new story here one for the ages? With a book this generous from a writer this gifted, we would be vulgar to ask.”

Moore eschews vulgarity to embrace elegance, even if that elegance is frequently informal: she’s a movie-star reviewer in caftan and flip-flops. Though she defends the first person as “a form of deference…useful and precise when discussing the subjectivity and crowded detail of narrative art,” she often relies on the royal we or the imperial one. She turns a fine phrase: Philip Roth’s work is “shrieking, lyrical”; Stanley Elkin’s words “swarm and lather”; Margaret Atwood’s character Zenia, from The Robber Bride, is “Richard II with breast implants…. Iago in a miniskirt”; Friday Night Lights (yes! Friday Night Lights!) features “family duty, Christian kindness, and charity” but “[f]or decoration there is also a lot of cleavage.” She is especially sharp about politicians: Bill Clinton in 1992 had such “itchy restlessness in a suit it seemed his clothes would fly off him.” Describing a 2011 GOP primary debate, she casts Jon Huntsman, Mitt Romney, and Rick Santorum as “Mama’s sweet choirboys” singing the national anthem, but continues: “the others, with more husky snark and testosterone, and I do include Ms. Bachmann, did not sing, and nothing in the eyes gave a look of knowing what song it might be or what verse anyone was on. But everyone’s hands were on their chests or in anatomically approximate places.” Politics allow Moore to rip more savagely than literature does, which makes the occasional political commentary especially hard-hitting. I long for a Lorrie Moore collection of exclusively political essays, shrink-wrapped, with barbs protruding.

Moore’s not interested in that kind of cultural separation, though. This is a kitchen sink of a book. She introduces us to the great singer Suzzy Roche’s novel Wayward Saints just before we read her early take on Lena Dunham (“The youthful sex of educated, family-funded drifters that Dunham puts on the screen is mostly heartless and degrading, and not remotely exuberant, which is her point”). She champions the “sweet stubbornness with which [Buddhism] is continually inserted” into Joan Silber’s Ideas of Heaven. “Perhaps religion has always been a kind of hospital,” she muses, “one of the few decent refuges for the lover whose one great love in life has already occurred.” Perhaps. Or perhaps it is simply Moore’s eagerness to tour concepts weirdly foreign to her that makes her a good fellow traveler, and perhaps it’s her love of wacky metaphor that makes her so quotable.

Is this collection too long and too broad? Do the forgiving judgments sometimes overlook irritating faults? Is every essay here worthy of inclusion? Having already done so much of it, I can only finish by quoting Moore herself: “with a book this generous from a writer this gifted, we would be vulgar to ask.”

See What Can Be Done
Essays, Criticism, and Commentary
Lorrie Moore
Knopf; $29.95; 407 pages