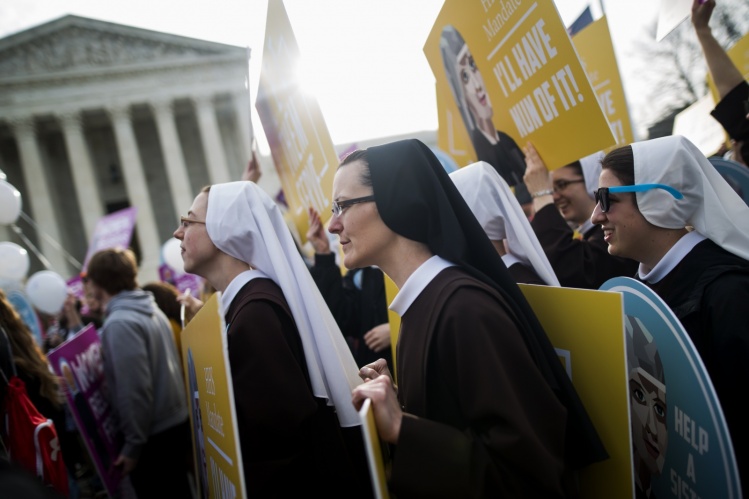 Before the death of Justice Antonin Scalia on February 13, 2016, it appeared relatively easy to predict the outcome of the high-profile religious liberty case before the Supreme Court that term: Zubik v. Burwell, which consolidated seven cases involving thirty-six religious non-profit petitioners, including, most notoriously, the Little Sisters of the Poor. At issue in those cases, as in Hobby Lobby two years prior, was the Affordable Care Act’s so-called contraceptive mandate. More precisely, Zubik focused on whether the “accommodations” to this mandate established by the Obama administration for religious non-profit employers (as opposed to houses of worship) satisfied the terms of the Religious Freedom Restoration Act of 1993, or instead violated the petitioners’ religious liberty under RFRA.

As readers of the news might recall, the Supreme Court decided, effectively, not to decide Zubik, in any event for now. In a May 16, 2016, per curiam order, the Court vacated “the judgments below” and remanded the various cases to the respective Courts of Appeals. The complex legal, political, and moral questions raised by Zubik will not, however, go away, even if the ACA eventually does. Justice Samuel Alito’s majority opinion in Hobby Lobby (2014) holds that judges should defer to petitioners’ sincere belief that a governmental action constitutes a substantial burden on the exercise of religion. Along similar lines, Justice Alito also wrote that “the federal courts have no business addressing…whether [a] religious belief asserted in a RFRA case is reasonable.” But is it reasonable to believe that complying with the regulations at issue—in particular, notifying the Department of Health and Human Services of opposition to coverage of contraceptives—is connected to the provision of contraceptives in a way that is sufficient to make it immoral to do so? What’s more, is such a belief “religious”?

With Justice Scalia’s death, and notwithstanding the Court’s May 16, 2016 order, it appears that what Justice Alito called, in Hobby Lobby, “a difficult and important question of religion and moral philosophy”—namely, the question of the right understanding of the ethics of cooperation in wrongdoing—can no longer be set aside. In Justice Alito’s terms, this question concerns “the circumstances under which it is wrong for a person to perform an act that is innocent in itself but has the effect of enabling or facilitating the commission of an immoral act by another.” The majority decision in Hobby Lobby castigated HHS for “[a]rrogating [to itself] the authority to provide a binding national answer to this religious and philosophical question” and declined to judge whether the petitioners’ own answer was right or wrong. Neither the dissenting justices in Hobby Lobby, however, nor all the lower courts in the cases leading to Zubik showed this same reluctance.

Last spring, shortly before the Supreme Court’s non-decision, the Commonweal editors criticized the USCCB’s over-the-top dramatization of the stakes in Zubik, but refrained from taking a position on the underlying questions. I didn’t know what to think myself, so I devoted a forum I edit, “Ethics in Focus,” to trying to make sense of the petitioners’ arguments. (By way of full disclosure, I edit “Ethics in Focus” for the online, open-access journal Expositions: Interdisciplinary Studies in the Humanities, which is published by the Center for Liberal Education at Villanova University. The forum is a collaboration of VCLE and the King’s College McGowan Center for Ethics and Social Responsibility.)

I invite interested readers to work through the contributions yourselves; brief summaries defeat the purpose of the forum. By way of preview, though, the three philosophers all reject the claim that giving HHS notice of opposition to the provision of contraceptives amounts to impermissible cooperation in wrongdoing. By contrast, Kate Ward concedes that “it is reasonable to regard even so seemingly insignificant an act as signing a document as formal cooperation in offering birth control to employees,” but the focus of her contribution is different: after observing that “determining whether an act is or is not cooperation is not sufficient for determining how one should proceed” and that “cooperation reminds us of the world’s moral complexity and the impossibility of avoiding any contact with evil,” she goes on to evaluate the Little Sisters’ case as an act of protest.

Here are some highlights, so to speak. According to Oderberg:

[W]hen it is distilled to its essence the objection was against the very idea of opting out. In other words, the objectors argued that by having to give notice, either to the Department of Health and Human Services or to their insurer or third-party administrator (TPA), of the fact that they objected on religious grounds to purchasing the coverage, they were illicit co-operators in wrongdoing….

Opting out is no more a form of co-operation than walking away when there is no duty to act, even though by walking away someone else will do something to which you object…. [I]n no way was any form of opt-out available to the objectors an authorization, explicit or implicit, for anyone else to go ahead and provide coverage. There was no “permission slip,” as the objectors complained; on the contrary, as the Tenth Circuit Court observed, “The government is not compelling the plaintiffs to endorse or license something they consider objectionable; instead, the government is allowing them to decline a legal responsibility while requiring another party to perform it in their stead”….

An opt-out, by its very nature, does not meet the definition of a co-operative deed, one that assists a principal agent in carrying out a primary act. It is certainly not formal co-operation, but neither is it material. The objector cannot say: “I am a material co-operator by opting out, since I know that by doing so the principal agent will provide that to which I object.” One might as well say that, by running away from a riot in order to protect oneself, one is assisting the rioters….

Merely being knowingly involved, in some bare causal sense, perhaps merely counterfactual, in the occurrence of some state of affairs does not make one a co-operator. To be a material co-operator, one has knowingly to assist the primary agent; when one opts out, one does not do this. In such a case, questions of proximity and the like do not even arise.

In the case of the mandate…, employers’ immunity from fines hangs not on their furtherance of the objectives that the officials at the HHS had in view in issuing the mandate, but rather on their compliance with the mandate itself. And what it means to comply with a law is independent of the further objectives the lawmaker had in view in enacting it. A law is not an invitation to participate in the projects of the lawmaker; it has a public meaning that is opaque to the further, private intentions with which the lawmaker enacted it. As a result, there is no expectation that employers will calculate their compliance with an eye to promoting contraceptive use…

[I]t is not qua playing the insurance-providing part in the lawmakers’ project of promoting contraceptive use, but rather qua complying with the law, that compliance with the mandate conduces to the end of avoiding fines….

[C]ertification amounts to material cooperation, not formal. For a good-willed employer files the form as a means of objecting, not as a means of providing contraceptive coverage….

My conclusion, however, does not lead one further to conclude that one need or ought not oppose the mandate’s imposition…. Were one not zealously to oppose instances of material cooperation imposed by the state, one would certainly face more profound intrusions on the exercise of one’s religion.

Finally, according to Ward:

[T]hrough skillful engagement with the courts and the news media, the [Little Sisters] succeeded not only in withdrawing their own participation in the provision of birth control, but also in framing the case as one of religious liberty and themselves as prophetic dissenters. The sisters’ protest effectively argues for an engaged Catholic presence in the world, against a “neo-Augustinian” model of retreat into holy seclusion. It presents a model for effective protest that does not simply denounce, but offers alternatives. And it draws our attention to two under-appreciated issues in Catholic theological thinking on protest: privilege and moral appropriation.

Meanwhile, Back at the Culture Wars: Douthat on "Franciscan Catholicism"