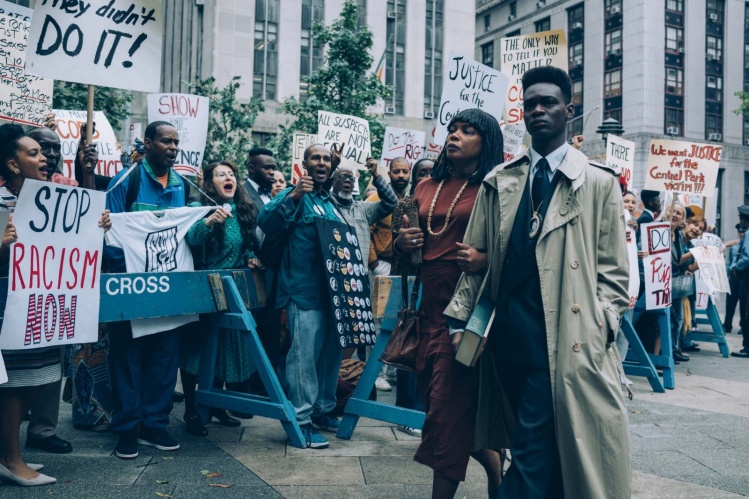 It may seem satisfying that the prosecutors who won the rape conviction of the Central Park Five in New York thirty years ago are finally being called to account for presenting a false narrative concocted from the coerced, conflicting confessions of five frightened teenagers. It shouldn’t: the legal system should have held its own accountable long ago, after the convictions were vacated in 2002.

Their drubbing follows the release of the Netflix drama When They See Us, a depressingly powerful but somewhat fictionalized version of real events surrounding the rape and nearly fatal beating of Trisha Meili, a white, twenty-eight-year-old investment banker who was jogging in Central Park on the night of April 19, 1989. Since the survivor was so traumatized that she could not testify about what had happened, it was left to prosecutors to assemble—and famously to steer—the case. The television series imagined that process from the inside, and prompted the “socialmedicide” campaign #CancelLindaFairstein. As a result, Linda Fairstein—celebrated as the one-time chief of the first prosecutorial sex-crimes unit and author of a series of bestselling crime novels featuring a sex-crimes prosecutor—has been forced to shed many honors accumulated over the years. Her relationship with her publisher, Penguin Random House, was severed. She withdrew from the board of Vassar College and three charities. And the prosecutor who tried the Central Park Five in court, Elizabeth Lederer, who remains an assistant district attorney, agreed not to return as a lecturer at Columbia University Law School.

Fairstein says the television series’s portrayal of her is distorted and that she’s the victim of a “mob mentality.” This gives her something in common with the one Latino and four African American teenagers who were swept away by a bogus prosecutorial tale and surge of sensationalized news coverage depicting them as subhuman. After they served their sentences, the convictions were overturned at the request of Manhattan District Attorney Robert Morgenthau because of new evidence: a confession from the real rapist, and supporting DNA analysis. Even then, Fairstein continued to defend the convictions, implausibly. So too did the NYPD.

The case of the Central Park Five is one of the best known of the 360 or so wrongful convictions that have been overturned because of DNA evidence, a process that has exposed systemic flaws in the criminal-justice system. Some prosecutors’ offices have responded by creating internal units to review questionable convictions. But there has not been a corresponding effort to hold prosecutors individually accountable for misconduct—and thus we’ve been left to rely on the inconsistent and not-so-tender mercies of social-media rage, a court of public opinion where fiction seems to count as much as fact. Such outpourings draw strength from the public’s sense that government processes favor the powerful, the wealthy, the insiders: a system focused too much on self-interest and not enough on the public interest.

Accountability shouldn’t have to rely on outrage generated by online petitions, boycotts, or hashtags.
sharetweet

In 2009, the cases of the Central Park Five were among fifty-three wrongful convictions that a New York State Bar Association task force examined. Its report found that no public disciplinary steps were taken against any of the prosecutors involved in the fifty-three cases; just one prosecutor was referred to a grievance committee that meets in secret. As Pepperdine University law professor H. Mitchell Caldwell wrote in the Catholic University Law Review, “New York has failed to address prosecutorial misconduct specifically. The state generally delegates the oversight of prosecutors to individual district attorneys’ offices. However, these offices continually fail to report misconduct to the proper disciplinary authority and to discipline their prosecutors for discovered misconduct.”

This reflects a national trend. Caldwell concludes his 2013 article by proposing that prosecutorial-conduct commissions be established. At the time, he noted that this idea “will receive scant support from legislatures reluctant to fight against the tide of public opinion, which views any efforts on behalf of convicted defendants as anti-law enforcement and pro-criminal.”

But it may be that in six years, times have changed and the view Caldwell expressed—“reining in prosecutorial misconduct should be viewed as a core social concern”—has taken hold. That’s the case in New York, where Governor Andrew Cuomo signed legislation in March creating the nation’s first State Commission on Prosecutorial Conduct. The District Attorneys Association of the State of New York has been fighting it in court, though, and succeeded in holding off implementation of an earlier measure that passed last August. Now that an amended bill has passed, the prosecutors are continuing a legal fight to stop creation of the commission.

Accountability shouldn’t have to rely on outrage generated by online petitions, boycotts, or hashtags.

The only attorney reprimanded in connection with the Central Park Five rape case was on the defense side, the civil rights lawyer William Kunstler. Representing defendant Yusef Salaam on appeal, he filed a motion based on a juror’s acknowledgement in a television interview that the jurors were sharing news accounts of the trial, which is prohibited. Given the tone of the coverage, that’s alarming.

The trial judge, Thomas B. Galligan, made short work of the motion. Court documents describe what happened next:

After the Clerk of Part 59 called the Mr. Salaam matter, Mr. Kunstler and the Assistant District Attorney noted their appearances, and Justice Galligan promptly informed Mr. Kunstler that the motion was denied, no hearing would be directed on same, and a copy of the motion decision would be available at the end of the day.

This colloquy then took place between Mr. Kunstler and Justice Galligan:

“MR. KUNSTLER: It is outrageous. You will not have an evidentiary hearing despite all the law that calls for it?

“THE COURT: I will not hear oral argument. Call the next case.

“MR. KUNSTLER: You have exhibited what your partisanship is. You shouldn't be sitting in court. You are a disgrace to the bench.

“THE COURT: Sir, I hold you in contempt of court.”

The court’s appellate division upheld the contempt order and fined Kunstler $250, which, knowing Kunstler, would have been worth the opportunity to assail the judge. A famously outspoken radical lawyer who’d been a leading figure in such cases as the 1969 Chicago 8 trial and the 1968 trial of the Catonsville Nine peace activists, Kunstler loved being in the public eye. A Supreme Court ruling that there is a right to burn the American flag; activist clients like H. Rap Brown, Stokely Carmichael, and Abbie Hoffman; Attica in 1971; Wounded Knee in 1973: Kunstler thrived on controversy.

But when Kunstler took on an appeal in the Central Park Five case, many of his friends on the left thought he’d gone too far in defining a convicted rapist as a victim of the system. Fairstein was at the leading edge of a push within the feminist movement to make the legal system tougher on rapists. Kunstler was feeling some heat.

This tension led to a Newsday magazine assignment for me in 1990, so I spent some time with Kunstler and talked with him about why he’d taken the case. Many people thought he represented Salaam because he enjoyed being provocative. And hadn’t he once said he’d never represent a rape defendant?

But he maintained that his client was the victim of a “legal lynching.” This was not just rhetoric. Kunstler, who died in 1995, had a good grasp of the history of how false rape charges were used to subordinate black men in the South. Kunstler had met the Rev. Martin Luther King Jr. in 1961, when Kunstler was providing legal help to Freedom Riders. King asked him to handle some legal cases. Among them was the case of Thomas Wansley, a black teenager sentenced to death in 1962 following his conviction by a white jury of raping a white woman in Lynchburg, Virginia. Wansley’s conviction was variously set aside—higher courts found fault with the trial judge’s rulings and also determined that the verdict was tainted by prejudicial coverage in two Lynchburg newspapers—and reinstated; ultimately, the U.S. Supreme Court allowed it to stand in 1974. Kunstler represented Wansley in his third and fourth trials and succeeded, at least, in avoiding the death penalty. With Kunstler appearing in two trials and in ten other proceedings, Wansley lived to be paroled in the mid-1980s, David J. Langum writes in his biography William M. Kunstler: The Most Hated Lawyer in America.

Very few people showed any sympathy for the Central Park Five. (One who did was New York’s Cardinal John O’Connor, who visited the defendants in a juvenile detention center and reached out to their families.) But Kunstler saw the youths in the light of the Wansley case, and other historical cases such as the Scottsboro Boys. He saw them in the light of what he’d learned from King, who wrote a foreword for Kunstler’s 1966 memoir of the civil-rights movement, Deep in My Heart.

In that foreword, King wrote of how important lawyers had been to the civil-rights movement and its hopes for ending systematic injustice. “If the legal profession would share the passion and action of our time, it has the strength to achieve these magnificent goals,” he wrote.

Today, such goals call out for the legal profession to do more to hold itself accountable when it reaches provably unjust verdicts.