Close to the Madding Crowd 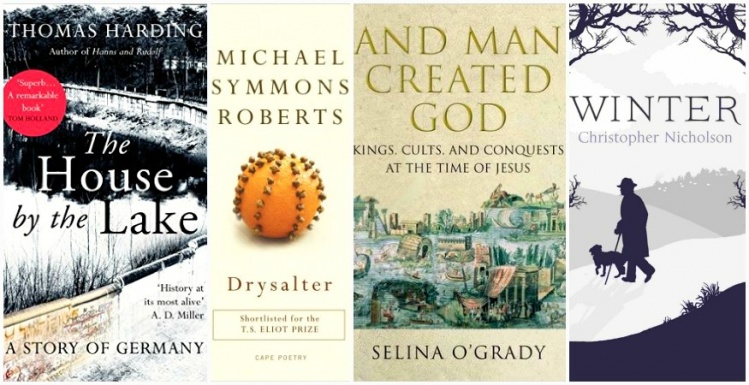 My reading in 2015 began well with a new novel called Winter (Europa Editions, $17, 256 pp.) by Christopher Nicholson, an English writer previously unknown to me. It is a biographical novel about Thomas Hardy, written on the same principles as my own efforts in this genre, keeping faithfully to the known facts of the writer’s life, but presenting them as subjectively experienced by using the techniques of the novel. In his old age Hardy, then living in rural Dorset with his second wife, Florence, became infatuated with Gertrude, the beautiful young wife of a local butcher, who played the part of the heroine in an amateur performance of the dramatized Tess of the D’Urbervilles. Hardy tried hard to get her cast in a professional production in London’s West End, which not surprisingly aroused the jealousy of Florence. Nicholson creates an expressive narrative voice for each of these three characters, but the presentation of Hardy’s consciousness, in skillful imitation of his own style, is particularly fine. The rendering of the location and the season is as vivid as the characterisation. No aficionado of Hardy’s books should miss this one.

How and why did Christianity dominate Europe and become the only world religion independent of any particular nation or territory? It’s a fascinating question, with several possible answers. Because God decided its time had come, is one (but then why did he later allow the rival religion of Islam to arise and flourish?). Because it suited the Roman Empire, faced with the challenge of the barbarians, to have a unifying state religion is another (but why Christianity?). Selina O’Grady’s And Man Created God: Kings, Cults, and Conquests at the Time of Jesus (St. Martin’s Press, $26.99, 416 pp.) offers another, plausible explanation: By this stage of its evolution the human race in the countries around the Mediterranean had developed a sense of individual self-consciousness that made the person-centered teachings of Christ, as interpreted and mediated by Paul, particularly attractive. The pagan religions did not offer “a way to live one’s earthly life, the promise of an afterlife, and a personal relationship with God.” The only serious competition came from the mystery cult of the Egyptian goddess Isis, with its emphasis on the feminine side of human nature. (I suspect that Colm Toíbín read O’Grady before he wrote The Testament of Mary.) In the end Christianity won, though statues of Isis suckling Horus directly influenced later representations of Mary and the infant Jesus. There is much more to And Man Created God than this theme, for O’Grady gives an informative panoramic picture of the principal religions, sects, and cults of the world at the time of Christ. Their bewildering multiplicity and variety make it difficult to deny the assertion of her title, that religion is a product of human culture.

As a young man the poet Michael Symmons Roberts was a militant atheist schooled in natural science who, unusually in this day and age, was converted to Roman Catholicism as a result of studying philosophy. I had been aware of his growing reputation, marked by the award of prestigious prizes, for some time before I belatedly read his collection of a hundred and fifty fifteen-line poems, Drysalter (Jonathan Cape), and understood why he had been described as “a religious poet for a secular age.” I can think of no modern poet since T. S. Eliot who has found such a strikingly original way of juxtaposing the physical with the metaphysical, the traditional with the contemporary, the transcendent with the mundane, in diction and imagery. “Sing a new song to the Lord, / sing through the skin of your teeth,” is the typical opening of one poem. In another, titled “Immortal, Invisible, Wise,” God has become “no more or less than sky. / Pylon skip-ropes swing between his feet, / airliner wing-tips brush his lips.” There is a sequence of five poems called “The Wounds” which seems to be about the crucified and resurrected Christ as a wounded pilot. Art critic Robert Hughes’s phrase, “the shock of the new,” came to mind as I read these poems.

Thomas Harding belongs to a Jewish family that escaped from Nazi Germany to England in the 1930s, abandoning, among other property, their summer house beside a lake near Berlin. His great-uncle Hanns served in the British army during World War II and after it ended succeeded in capturing Rudolf Höss, the notorious commandant of Auschwitz. Harding wrote up this story in a riveting book called Hanns and Rudolf, published in 2013. Now he has written a kind of sequel, The House by the Lake (Picador, $28, 464 pp.) tracing the history of the modest building from its original construction to the present day, and describing its various owners and occupants and their interaction. The result is a fascinating and revealing account of a century of German social and political history, told in an effortlessly accessible way. It corrects some common assumptions—for instance, that everybody in East Germany was wretched under the regime. In fact many had a better life under it than after the notorious Wall (which ran close to the lakeside house) came down. The familiar stories of the plight of German Jews under Nazism, and of German civilian women raped by the victorious Russian army, acquire a new vividness and pathos by being presented in this chronicle of a single dwelling and its inhabitants. The book ends cheeringly with Thomas Harding’s success in getting the dilapidated house restored, and his hope of making it an education center dedicated to reconciliation.

David Lodge is a novelist and critic. Among his novels are Changing Places, Nice Work, and Author, Author. His most recent work, a memoir, is Quite a Good Time To Be Born (Harvil Secker).

When the Escalator Stopped