‘Will the Circle Be Unbroken’
By Steve Futterman
Music
Culture
Arts 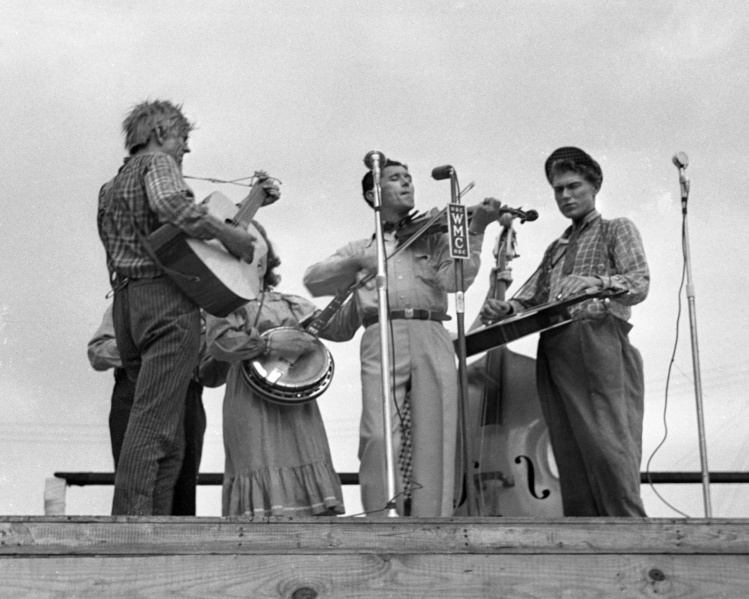 There were three acts on the bill, each a headliner in his own right, and the top admission price was two dollars. In what now seems like an alternative universe, the Schaefer Music Festival, held in a repurposed ice skating rink in New York City’s Central Park, presented concerts all summer long, featuring a superlative and eclectic array of acclaimed musical acts. I feel as if I lived in or around that magical rink for the better part of each summer of the early 1970s.

This particular concert took place on August 15, 1973. Doc Watson opened the show, followed by the Earl Scruggs Revue, with David Bromberg closing the evening. Nearly sixteen years old, I had been going to shows for three years already, but I had never seen any of the performers featured that night. Why was I even there? My passion was rock music. A few of the first acts I had already seen—the Doors, the Who, and Led Zeppelin—gave a clear indication of where my interests lay: loud, electric guitar–based classic rock, if a decade before it was designated “classic.” So what brought me to a show spotlighting three figures whose acoustic-based music spoke firmly of authentic bluegrass, country, and folk roots?

The answer was the album Will the Circle Be Unbroken, a triple-LP set recorded two years previously in Nashville and released in November 1972. Circle was a crossover project that brought together the Nitty Gritty Dirt Band, a folk-rock unit with Los Angeles roots that had scored a top ten hit with “Mr. Bojangles” in 1970, alongside a host of country and bluegrass legends including “Mother” Maybelle Carter, Merle Travis, Roy Acuff, and Jimmy Martin, as well as Doc Watson and Earl Scruggs, accompanied by such first-rate Nashville session players as the fiddler Vassar Clements, the bassist Junior Huskey, and the guitarist Norman Blake. The music-making throughout was masterful, the integration of supposedly incompatible cultures untraceable, the synthesis joyous and ultimately moving. It was an unlikely union that Dirt Band banjo player John McEuen memorializes in his book celebrating the fiftieth anniversary of that occasion: Will the Circle Be Unbroken: The Making of a Landmark Album.

For open-eared pop music fanatics of the seventies, Circle was a gateway album that revealed vistas. It spoke of a world beyond the sonic eruptions of rock-and-roll, yet one that could exist peaceably alongside it. The unassuming splendor of the music I heard that night in Central Park, particularly the marvelous flatpicking and straight-from-the-hills singing of Watson and the offhand brilliance of Scruggs’s banjo playing—indeed, the seemingly effortless, stirringly unselfconscious virtuosity of both men—brought to life the pleasures of a new idiom, one I still cherish. It was the joy already embedded in that momentous album come to life.

The music-making throughout was masterful, the integration of supposedly incompatible cultures untraceable, the synthesis joyous and ultimately moving.
sharetweet

Antecedents for the project were actually abundant. The Byrds, Buffalo Springfield, the Flying Burrito Brothers (with the stylistic pioneer Gram Parsons at the helm), the Band, the Grateful Dead, and, of course, Bob Dylan, among others, were already infusing elements of country and bluegrass into their sound. But where these artists suggested their influences, the Nitty Gritty Dirt Band went straight to the source.

What made Circle special was the privileged tier it accorded the guest performers. Dirt Band members can be heard adding idiomatic playing and occasionally taking a convincing lead vocal, but the spotlight remains firmly on the veterans, who by and large perform repertoire for which they are well known. The tunes—mainly older songs associated with the guest artists, or in the case of those featuring the Dirt Band, Hank Williams—are rendered with acoustic instruments in traditional arrangements. Such unadorned performances spoke with a force and passion that the roots-influenced rock artists could only hint at in their own recordings. It was obvious to anyone hearing it, no matter their familiarity or knowledge of country or bluegrass, that here was the real thing, unvarnished and unmistakable.

The highlights pile on one after another: Doc Watson having himself a time with the country hit “Tennessee Stud ”; Merle Travis picking and singing a low-keyed “I Am a Pilgrim”; Earl Scruggs and John McEuen’s banjo duet on “Soldier’s Joy”; Jimmy Martin’s boisterous take on “You Don’t Know My Mind”; Roy Acuff’s aching “Pins and Needles (In My Heart)”; Vassar Clements’s dash through “Orange Blossom Special,” as well as his sweet and swirling work throughout the album, to highlight just a handful of these vibrant, unpretentious performances.

The best of them all—certainly the most affecting—may be the numbers featuring the matriarch of country music, “Mother” Maybelle Carter of the pioneering Carter Family. Her wavering pitch only increasing her expressiveness, and her unblemished guitar and autoharp bringing it all back to the music’s beginnings, Carter commands lovely versions of “Keep On The Sunny Side,” “Wildwood Flower,” and “I’m Thinking Tonight Of My Blue Eyes.” When she, Martin, and Acuff split the verses on “Will the Circle Be Unbroken”…well, there aren’t any words.

Recalling the impressive detail of the original album’s artwork and packaging, McEuen’s book boasts exceptional photographs of the 1971 recording sessions by the album’s ambidextrous producer, William E. McEuen—John’s brother, better known as Bill. Through their intimate nature, these pictures capture the rapport and spontaneity that characterize the historic encounter. McEuen’s comments on each of the tunes, combined with contributions from other Dirt Band members, paint a vivid—if maddeningly repetitive (did someone forget to invite an editor to the party?)—portrait of an intensely creative six-day session. But if it leads you back to the original album, the book has served its purpose.

Such unadorned performances spoke with a force and passion that the roots-influenced rock artists could only hint at in their own recordings.
sharetweet

McEuen and company bring the same humility and sense of awe to their recollections as they brought to Nashville fifty-one years before. There they were surrounded by musical royalty, heroes and heroines who had molded them; pop-music ego trips, it was certain, had no place in that studio. And it seems from everyone’s memories that these legends were equally gracious and committed. (This includes Nashville potentate Roy Acuff, who, once he overcame his initial reluctance to record with the longhairs from L.A., found his own firm place among the proceedings. The tale is well told—and succinctly—in the sixth episode of Ken Burns’s 2019 documentary, Country Music, which spotlights the historic recording session.) Bill McEuen’s inspired decision to keep snippets of studio patter embedded in the album catches the warmth and ease of the sessions. The exchange between Watson and Travis as they meet for the first time is as exalted as any music fan could wish for.

Eloquent short essays by Marty Stuart and Gary Scruggs (Earl’s eldest son) attest to the album’s impact on artists on both sides of the musical fence. For, as Stuart asserts, Nashville wasn’t exactly in the artistic purity business at the time. “As country artists, we are best when we’re at home with our natural selves,” Stuart writes. “The record shows that it has often been the fond gaze of notable people from outside the walls of country music who’ve recognized the beauty and relevance of what we often overlook or leave behind in search of more lucrative pastures. The kindness of strangers has often led us back home.” As he rightfully states, “everybody won.”

Upon release, Will the Circle Be Unbroken was critically lauded (coverage in Rolling Stone magazine initially led me to it), and it sold well—ultimately going platinum. The best-selling soundtrack to the Coen brothers 2000 film, O Brother, Where Art Thou? echoes Circle in its inspired melding of contemporary artists and revered elder figures, cementing the then burgeoning Americana movement. Yet Will the Circle Be Unbroken should be seen as so much more than just a historically significant antecedent. In many ways the album acts as an addendum to the first two epochal albums by The Band: 1968’s Music From Big Pink and 1969’s The Band, as well as Dylan’s Nashville Skyline from that same year. These were recordings, made during the height of the Vietnam War, amid intense generational and racial divisions, that suggested a tentative rapprochement between youth culture and established traditions, or at the very least an acknowledgement of collective American roots—albeit from a strictly white perspective.

The Nitty Gritty Dirt Band put these ideas into practice. They may not now have accrued the hip cachet of, say, a Grateful Dead or a Gram Parsons, but these eager and willing cultural adventurers deserve a collective pat on the back, as do their illustrious and equally committed guests. Fifty years on, Will the Circle Be Unbroken remains timeless and instructive, especially in our current period, riven with seemingly intractable dissenting voices. While it will take a lot more to cool down the nation than singing an old country song in harmony, it might not hurt. As John McEuen recalls of those enchanted sessions: “It would be music to the ears of thousands of folks out there, a salve for the soul, a coming together of the ages, in a space where time stood still, with no agenda other than ‘get it right the first time.’” They did.

Will the Circle Be Unbroken
The Making of a Landmark Album
John McEuen; photographs by William E. McEuen
Backbeat Books
$38.99 | 264 pp.

Steve Futterman has written about jazz for The New York Times, The Washington Post, and Rolling Stone and for the past three decades has contributed the weekly "Jazz and Standards" listings for the New Yorker.