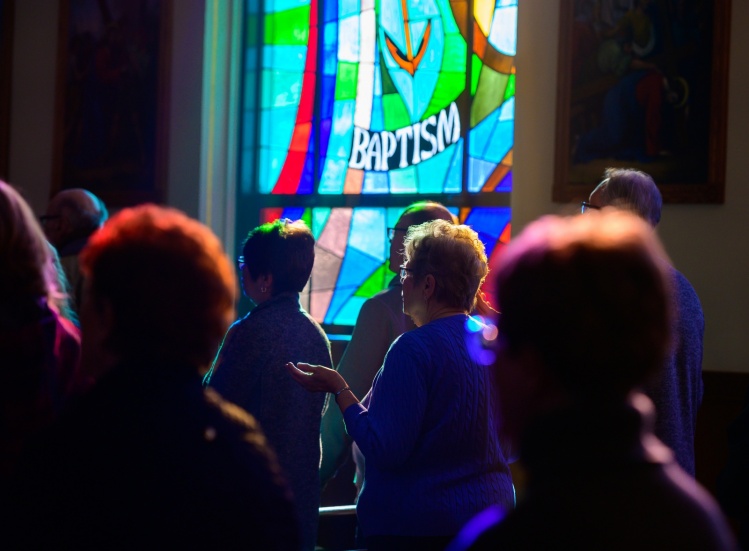 In a recent column Margaret Renkl, a contributing opinion writer for the New York Times, announced that she, a cradle Catholic, has finally left the Church (“The Meaning of Lent to This Unchurched Christian”). She loved her parish, but evidently that was not enough to keep her tethered to the larger Church. Instead of attending Mass, she’ll make do spiritually with “a walk in the woods alone.” Renkl, a native Southerner and long-time Nashville resident, often writes about nature, but has occasionally vented her frustrations with the “institutional Church” and Catholicism’s teachings on sexual morality. She finds nature more uplifting, more in communion with the transcendent, than the faith of her youth. The Church’s refusal to ordain women she regards as a kind of original sin. Besides, her “conception of the divine had enlarged beyond any church’s ability to define or contain it.” Personally, I think the Incarnation is about as “beyond” as it gets.

Renkl’s frequent pantheistic reveries in the Times remind me of Chesterton’s warning that “Nature-worship is more morally dangerous than the most vulgar man-worship of the cities; since it can easily be perverted into the worship of an impersonal mystery, carelessness, or cruelty.” Renkl, her husband, and two sons were on the steps of the U.S. Supreme Court building when the decision legalizing same-sex marriage was announced (“How to Defy the Catholic Church”). “Love had actually won,” she wrote of the decision. She went on to denounce the archbishop of Indianapolis for insisting on the dismissal of a teacher for entering into a same-sex marriage. The bishop’s action was nothing more than a “witch hunt” and “breathtaking” hypocrisy. Consistency, Renkl argued, would require the dismissal of teachers who use birth control or who divorce and remarry without an annulment. But those other violations of Church teaching, whatever one thinks of them, are usually less public and therefore less confrontational than the act of entering into a same-sex marriage. You don’t have to agree with the bishop to recognize his quandary. How is one to make sense of Catholicism’s traditional anthropology and sexual ethics if marriage, long solemnized as an act performed by “a man and a woman” before God, is no longer defined by such God-given identities? Even Andrew Sullivan, someone who was instrumental in bringing about “marriage equality,” concedes that the Church probably cannot coherently take such a step. To be sure, there are plenty of Catholic theologians who think otherwise, but that debate has only just begun.

Renkl dismisses the Church’s teachings out of hand.
sharetweet

Renkl dismisses the Church’s teachings out of hand. She suggests that because same-sex marriage is now a protected Constitutional right, it must be accepted by the Church. She appears to feel the same way about legalized abortion. The venerable American belief in the value of religious dissent and the separation of church and state, Renkl insists, must not stand in the way of “love.” Religious institutions that do not conform must be defied, ostracized, and legally brought to heel. “Love will never truly win until everyone stands up for it,” Renkl pronounces. “In defending the moral and spiritual equality of those in same-sex marriages, Christian believers too have the opportunity to become something greater than once they were.”

I think Renkl takes a very illiberal and even condescending approach to some difficult and complicated issues. I don’t know if bishops are right in any particular instance to dismiss employees whom they judge to be in public defiance of fundamental Church teaching. I do know bishops have a right to do that, and that this right should be legally protected. I don’t want the state to make those decisions for the Church. My sense is that some bishops will go out of their way to pick this fight while others will turn a blind eye to it.

No one knows what the long-term social consequences of same-sex marriage will be, let alone what “gender theory” and transgender identity will mean for children, marriage, and the larger culture. When I was young, there was much talk about the sexual and spiritual benefits of open marriage, how divorce is actually good for children, and why recreational drug use broadens the mind. One was urged, as we are again today, not to stand in the way of “love” or to question the authority of personal “experience.” It would be refreshing if those now preaching the obsolescence of traditional institutions, morals, and gender categories would concede that they don’t know what the future will reveal either. There is no right or wrong side of history to be on; there is only the way things turn out, which none of us knows in advance. Perhaps, as Renkl thinks, the Church’s acceptance of same-sex marriage will enable it to become something “greater.” But at the moment, neither side in this debate has produced a notably more vibrant Catholicism. Perhaps we should put that proposition to the test. Let some bishops embrace same-sex marriage and others stand pat. Let’s see which communities build up the Church and which do not. Renkl may no longer have much interest in the fate of the “institutional” Church. But I do, and so should you.

Throwing Money at a Problem