Behind the New Integralism Is the Old Intransigentism
By Massimo Faggioli
Vatican II
Secularism and Modernity
Pope Francis
U.S. Catholicism 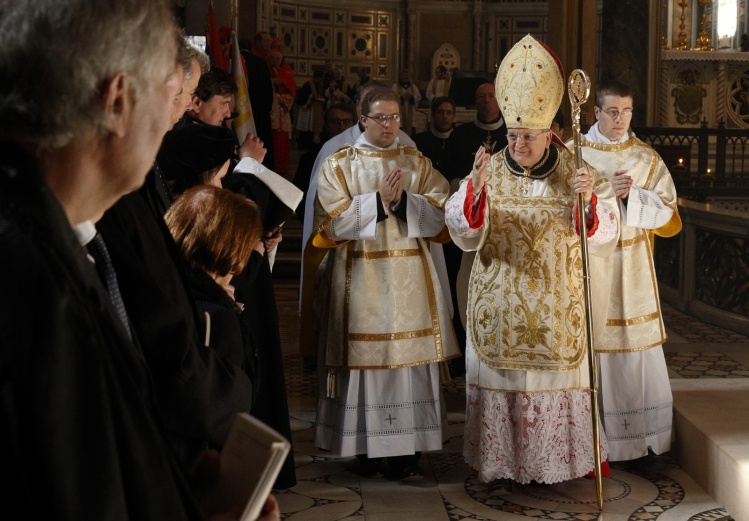 At the 1867 universal exposition in Paris, the Papal State chose to be represented by a catacomb. It was a time when the papacy, which had already lost the majority of the Papal State and would also lose Rome in 1870, was apocalyptic about the future of the church in the modern world. At the same time, the Catholic laity were entering a new age of mobilization and engagement with that same world, with the encouragement of the Catholic hierarchy, which knew it had lost much of its direct influence on modern society. Today, during Pope Francis’s pontificate, we see something like the opposite situation: a pope who preaches “the joy of the Gospel” and has little time for nostalgia, and a rising cohort of Catholic intellectuals (a minority in the church, but especially active in the United States) who are looking forward to the nineteenth century.

The debates in conservative and traditionalist circles in the English-speaking church—and in the United States particularly—provide a stark contrast to this pontificate’s view of the relationship between the church and the modern world. Some rather musty theological isms are once again circulating. There is, for example, a new wave of ultramontanism that looks to an idealized conception of Rome for its points of reference. There is also a related resurgence of “integralism,” inspiring conferences at the University of Notre Dame and Harvard. The new integralism takes a step beyond the more tentative Catholic post-liberalism, or the simple proclamation of the crisis of liberal Catholicism. Integralism is the attempt to imagine for the Catholic Church—but also for the world in which the church lives—a future that rejects the “liberal” separation between temporal and spiritual power, and subordinates the former to the latter.

According to Sacramentum Mundi (first published between 1968 and 1970, and now available online—its general editor was Karl Rahner, SJ) integralism is

the tendency, more or less explicit, to apply standards and directives drawn from the faith to all the activity of the Church and its members in the world. It springs from the conviction that the basic and exclusive authority to direct the relationship between the world and the Church, between immanence and transcendence, is the doctrinal and pastoral authority of the Church.

Here one can detect a subtle difference between the classic definition of integralism and its twenty-first-century variety. This new strain is focused almost exclusively on the political realm. In fact, what it resembles most is another phenomenon of nineteenth-century Catholic culture: intransigentism—the belief that any concession to, or accommodation with, the modern world endangers the faith. Unlike mere conservatism, which values elements of the past and seeks to preserve them, intransigentism rejects the modern outright and preemptively. This has consequences for the theological thinking of Catholics who today call themselves integralists, traditionalists, and ultramontanists. For these Catholics, the past sixty years—and especially Vatican II—either do not matter at all or matter only if they can be interpreted as a confirmation of the church’s past teaching. This is, among other things, a misreading of what Pope Benedict XVI had to say about continuity; while he stressed the continuity of the church itself as a single subject extended throughout history, that does not necessarily mean that all doctrine remains constant. Church documents that are key to understanding how the theological tradition works in the Catholic Church, especially the four constitutions of Vatican II (for example, Dei verbum on Scripture, Tradition, and the Magisterium), are not really part of the culture of this intransigent worldview. Typically, this theological culture reads the conciliar declaration on religious liberty, Dignitatis humanae, as if it were perfectly in accord with the church’s previous teaching on that topic.

Liberal Catholicism today is much more accepting of individualistic, bourgeois society than it was in the nineteenth century. But intransigentism hasn’t really changed much in the past 150 years.
sharetweet

The new intransigentism celebrates Pius IX’s Syllabus of Errors (1864) and its refusal to adapt to modern times. The Syllabus aimed its fire at four modern developments: the Reformation, the Enlightenment, the French Revolution, and the liberal state. Even then there were common roots between theological intransigentism, legitimism (sacral legitimacy of political power), and legal traditionalism (as opposed to constitutionalism). Today’s Catholic reactionaries would add one more target: Vatican II, understood as the church’s capitulation to modernity and the liberal order.

It is interesting how different the liberal Catholicism of the nineteenth century is from the liberal Catholicism of today, and how similar the Catholic intransigentism of the nineteenth century is to the intransigentism of today. Liberal Catholicism today is much more accepting of individualistic, bourgeois society than it was in the nineteenth century, when it had a more prophetic edge. But intransigentism hasn’t really changed much in the past 150 years, especially when it comes to the question of the confessional state—a question on which the church’s official teaching has changed during this period. It would be interesting to ask the proponents of this kind of Catholicism what they make of the plight of Catholics who have to live as minorities under integralistic non-Christian confessional regimes, and why those Catholics do not seem to be so afraid of liberalism.

Everyone interested in this subject should read what Yves Congar wrote about it in a famous appendix to his 1950 book True and False Reform in the Church. (Interestingly, Congar decided not to publish this appendix on “integralism and right-wing mentality” in the second edition of his book in 1969, and the same decision was made for the English translation published in 2011.) There Congar addressed the affinity of this kind of Catholicism for the political right, grounded in the dream of restoring a monarchical order, or at least an authoritarian one. “Integralism” and “right-wing mentality” converge in the tendency to condemn all that appeared after a certain date in history. Congar listed eight elements that are typical of the integralist mentality: pessimism about human nature; belief in the need of strong authority; distrust of doctrinal development; an inclination to make sure Catholicism does not become too easy; an emphasis on dogmatic formulas over the subjective reality of faith; a preference for deductive reasoning over inductive reasoning; ecclesial authoritarianism; and the idea that the ecclesiology of the church should be shaped not by the mystical dimension but by a rigid hierarchy. Integralism, continues Congar, is not a heresy because it chooses orthodoxy and hierarchy. But Congar observed: “An exaggerated emphasis on orthodoxy can also be a way of leaving Catholicism.” And he added the words of John Henry Newman about integralism: “They build a Church within the Church…while making of their views a dogma. I am not defending myself against them, but against what I would call their schismatic spirit.”