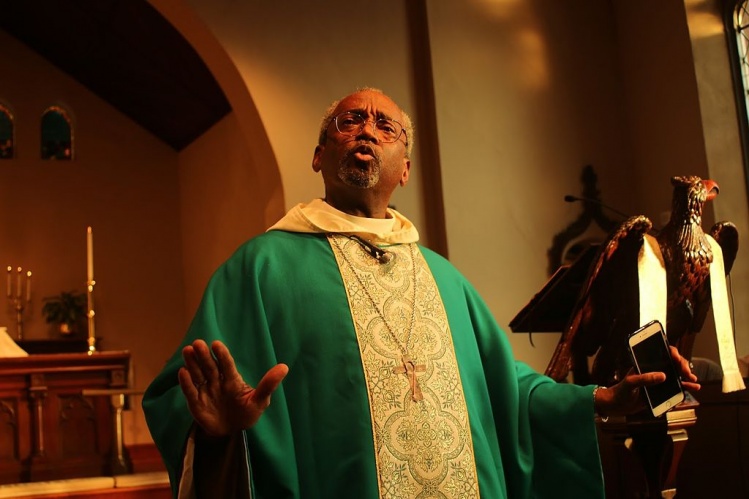 Maybe it takes a royal wedding to offer lessons in what a good sermon sounds like.

Maybe it takes one of the world’s most elitist institutions—a monarchy, for goodness’ sake—to provide a view of Christianity rooted not in conservative cultural warfare (or unrelenting support for Donald Trump) but in an egalitarian love that will “let justice roll down like a mighty stream.”

And the Most Rev. Michael Curry, who preached for a royal couple and the world last Saturday, isn’t finished with us yet. On Thursday, a group of Christians will march to the White House for a candlelight vigil inspired by a declaration entitled “Reclaiming Jesus: A Confession of Faith in a Time of Crisis.”

The presiding bishop and primate of the Episcopal Church, Curry is a prime mover of a statement suffused with a sense of urgency about “a dangerous crisis of moral and political leadership at the highest levels of our government.”

While Trump lurks behind almost every paragraph of this passionate assertion of faith, he is never actually mentioned. This reflects the desire of the endorsers to focus on what it means to proclaim that “Jesus is Lord.” The opening paragraph makes this clear: “We believe the soul of the nation and the integrity of faith are now at stake.”

At a time when social media and email inboxes bulge with manifestos about the dangers posed by Trump, “Reclaiming Jesus” is distinctive: Its vision contrasts sharply with the approach taken by Christians who are invoking religious arguments in apologetics for a president whose actions and policies seem antithetical to almost everything Jesus taught.

The Rev. Jim Wallis, a progressive evangelical leader and the declaration’s main drafter, credited Curry for encouraging his colleagues to speak out. “The two of us talked and prayed about this for months before inviting a group of elders to join us for a retreat on Ash Wednesday” to discuss “a theological and biblical statement.”

Even if its implications about you-know-who are unmistakable, the call—issued by twenty-three prominent Christians with long experience in social struggles—“wants to be about Jesus, not Trump,” Wallis said in an interview. The hope is to challenge Christians to reach their political conclusions only after pondering what Jesus and his disciples actually said.

“What we believe leads us to what we must reject,” the signers assert, laying out six core propositions and the conclusions that follow.

At a time when social media and email inboxes bulge with manifestos about the dangers posed by Trump, “Reclaiming Jesus” is distinctive
sharetweet

If “each human being is made in God’s image and likeness,” then Christians have a duty to repudiate “the resurgence of white nationalism and racism in our nation on many fronts, including the highest levels of political leadership.” A belief that “we are one body” requires opposition to “misogyny” and “the mistreatment, violent abuse, sexual harassment and assault of women.”

Since “how we treat the hungry, the thirsty, the naked, the stranger, the sick and the prisoner is how we treat Christ,” Christians must oppose “attacks on immigrants and refugees” and “cutting services and programs for the poor” accompanied by tax cuts “for the rich.”

The final three assertions were especially pointed about the unnamed president. Because “truth-telling is central to the prophetic biblical tradition,” Christians should stand against “the practice and pattern of lying that is invading our political and civil life.” It notes that “Christ’s way of leadership is servanthood, not domination,” and this means resisting “any moves toward autocratic political leadership and authoritarian rule.”

The declaration’s most barbed conclusion comes from Christ’s injunction to “go into all nations making disciples.” This, the signatories say, demands a rebuke to “‘America First’ as a theological heresy.”

“While we share a patriotic love for our country,” they add, “we reject xenophobic or ethnic nationalism that places one nation over others as a political goal.”

This is a testing time for the country as a whole, but the moment presents a particular challenge to the Christian churches.

Trump, after all, won a substantial majority of the vote among white Christians. The battle within Christianity (and not just in the United States) can be defined in many ways. It is at least in part between those who would use faith as a means of excluding others on the basis of nation, culture and, too often, race, and those who see it as an appeal to conscience, a prod to social decency—and, yes, as an invitation to love.

The question “Who is Jesus?” has been debated for two millennia. It is starkly relevant now.