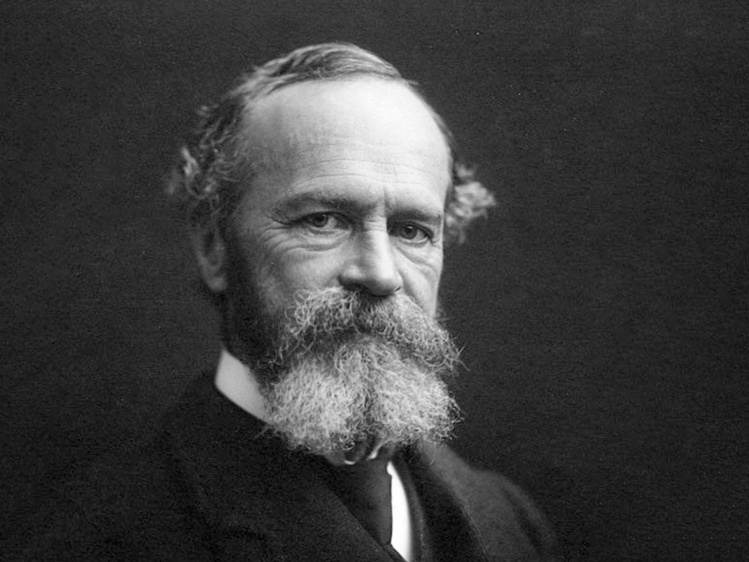 William James (1842–1910) is arguably one of the most brilliant and fecund minds this nation has ever produced. James and his friend Charles Sanders Peirce were the progenitors of the only distinctly American philosophical movement, pragmatism. The Principles of Psychology, published in 1890, marked James as the first prominent American psychologist. His The Varieties of Religious Experience (1902) established him as a pioneer in the study of comparative religion. Americans have long looked to Europe for intellectual beacons, but James deserves our attention.

John Kaag’s short, luminously written Sick Souls, Healthy Minds serves as both a biography and an introduction to James’s thought, but, most significantly and in the spirit of James himself, it delivers healing wisdom for those James described as “sick souls.”

James’s own bouts with depression were long and parlous. In his mid-thirties, while seeking a cure in Europe for his stupefying funk, he wrote to his father that “the thoughts of the pistol, the dagger and the bowl” have begun to “usurp an unduly large part of my depression.” Kaag avoids over-intellectualizing the causes of James’s acedia. Nevertheless, he argues that James felt paralyzed by the strong arguments for determinism—i.e., the view that every event, including every human action, is caused by, and explicable in terms of, a preceding event, and that free will is therefore a chimera. Ironically, determinism is the philosophical equivalent of the Calvinist belief in pre-determination that James’s loving father grappled with and ultimately rejected.

In 1870, at one of his many low points, James perused the work of the minor French author and recluse Charles Renouvier. In his Essais, Renouvier argues that individual free will “could break the logical continuity of a mechanical series and be the initial cause of another series of phenomena.” Renouvier emphasizes that a person cannot get past the problem of determinism merely by means of abstract argument: “To truly grasp the lesson [that free will exists] an action or undertaking was required.” According to Kaag, this short tract provided James with his road-to-Damascus moment. Feeling as though he had been born again, James resolved: “My first act of free will...shall be to believe in free will.”

Both as an empirical psychologist and as a philosopher, James made a careful study of the nature and significance of habits. He came to the conclusions that habit “is the enormous fly-wheel of society, its most conservative agent.” Most of us are in thrall to robot-like patterns of behavior. We are risk-averse and devoid of the boldness James’s hero, Goethe, described as possessing “genius, power and magic.” Acknowledging the power of habit, Kaag chuckles at his own need to toss back a cold beer at the end of every workday. I know whereof Kaag speaks. Passing the pub as I drive home, I will sometimes bark at myself “Not today!”—and then mechanically pull into the bar for happy hour. Belief in free will requires, at a minimum, that we be able to exorcise habits. With that end in mind, James suggests, “Everybody should do at least two things each day that he hates to do, just for practice.”

James suggests, “Everybody should do at least two things each day that he hates to do, just for practice.”
sharetweet

Kaag explains that, unlike philosophical rationalists, James embraced an “embodied epistemology.” In his view, when we adopt a belief it is not just a cerebral process. “Pretend what we may,” he wrote, “the whole man within us is at work when we form our philosophical opinions. Intellect, will, taste, and passion cooperates.” Elaborating on this point, Kaag writes, “Minds are not computers set atop bodies. They are not bloodless calculators that govern our emotions and preferences.”

Nor are our passions isolated inner perturbations divorced from action. James and physiologist Carl Lange formulated the famous James-Lange theory of emotion, which might be summarized thus: “We don’t laugh because we’re happy, we’re happy because we laugh.” When the black dog is snapping at my heels, I am inclined to stay in bed, stare at the ceiling fan, and haunt myself with a bevy of torturous thoughts. À la the James-Lange theory, I don’t stare because I am depressed. I’m depressed because I am staring. Instead of just waiting for a dark mood to pass, or trying to pull ourselves out of it with the right thoughts or arguments, James prescribes that we pry ourselves out of bed and shake our psyche up with something like the yoga practice he religiously followed.

The lesson Kaag has plucked from James is in many ways the old “fake it until you make it” strategy. So long as you can get up the energy to “fake it,” there is much to recommend this ploy. Kaag, however, does not kid himself. He recognizes that for those on the razor’s edge, there are times when healthy action seems impossible, and the idea of mimicking feelings of peace and joy a cruel joke.

What makes taking the Jamesian medicine even more difficult is that we live in an era when the whole vocabulary for our inner landscape is neuro-chemical. The contemporary version of determinism holds that our joys and sorrows can all be explained in purely biochemical terms—and perhaps they can. But the biomedical approach undermines our sense of agency and invites us to believe that when we’re distraught there is nothing we can do but go to the medicine cabinet.

James and his fellow pragmatists taught that when one can’t decide a question on either logical or empirical grounds, the criterion for whether there is “warrant” for a belief is the belief’s moral effects. If those effects are salutary, then we ought to will to believe what we cannot know with certainty.

Kaag explores other corners of James’s rangy theories, such as his long and unorthodox study of consciousness, which involved experimenting with “consciousness raising” substances like nitrous oxide (laughing gas). Like Ralph Waldo Emerson, whom Kaag describes as James’s “intellectual god-parent,” the otherwise-pragmatic James was intent on discovering if there was anything beyond what he was the first to call “the stream of consciousness.”

In the end, he concluded that we cannot study consciousness as an object; it is instead “a marvelous thing, a miracle, an object of great astonishment,” plastic and ever-changing in inexplicable ways. Kaag reminds us that for all of James’s emphasis on the will, his conception of a healthy consciousness also depended on a kind of relaxed receptivity—an ability to see ourselves and the world around us anew. In short, for James, a healthy mind maintains a balance between activity and passivity.

Sick Souls, Healthy Minds is a remarkably wise and a delightful book, notable for both its clarity and the charm of its exposition. But what really sets it apart is Kaag’s extraordinary ability to intertwine illuminating stories from his own life with those of the life he is investigating. This book may not “save your life” but it will certainly enrich it.