Can Hope Combat Despair (and Denial) on Climate Change? 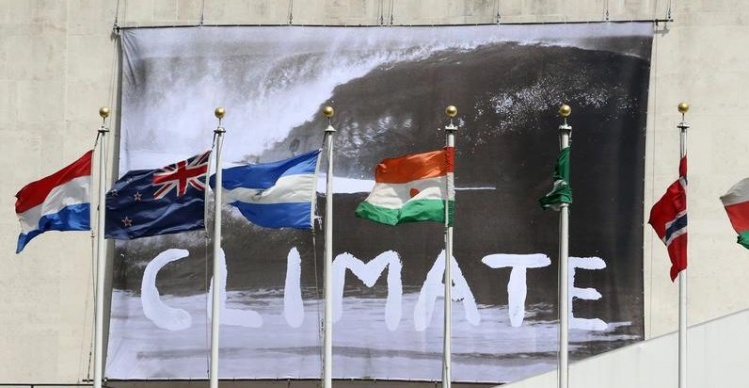 With this July officially the hottest month in recorded history, and 2015 likely to top 2014 as the hottest year; with wildfires consuming swaths of rainforest in the Pacific Northwest; with heat-trapping carbon dioxide having risen from pre-industrial-era levels of 280 parts per million to above 400 ppm this year (where they’re likely to stay absent significant action to reduce emissions), it’s hard not to be pessimistic about the state of the earth’s climate, if not legitimately depressed. Climate researchers themselves increasingly show signs of what psychologists have labeled “pre-traumatic stress”—the anger, panic, and “obsessive-intrusive” thoughts that come with the daily work of charting what looks like an increasingly bleak future. Relentless attack on the part of climate-change deniers is said to play a contributing role.

“Certainly the possibility of extremely bad effects should weigh heavily on our minds,” David Cloutier wrote on this blog in May. “But the contemplation of such effects can even have paradoxical effects, leading us to despair, especially when we recognize that any individual changes we make may be lost in humanity’s massive collective activity.” The giving up of hope, however, is exactly what we need to guard against when it comes to climate change. To that end it’s been interesting to see how two of the most typically gloomy writers on the topic have recently been finding silver threads in the gathering clouds.

For instance, Elizabeth Kolbert’s recent profile of Christina Figueres, who heads the U.N.’s Secretariat of the Framework Convention on Climate Change, bears the hopeful tagline, “The Woman Who Could Stop Climate Change.” Figueres is characterized as such for her near certainty that something positive will emerge from the upcoming annual Conference of the Parties on climate change, to be held in Paris. Figueres, Kolbert writes, is aware of the danger of high expectations but “is doing her best to raise them further, on the theory that the best way to make something happen is to convince people that it is going to happen. ‘I have not met a single human being who’s motivated by bad news,” she told me. “Not a single human being.’” That she can maintain this attitude—not only while working within the bureaucracy of the U.N. but also while being charged with persuading 195 countries to scale back their use of fossil fuels—is something she attributes to being the daughter of the man who led the Costa Rican revolution of 1948. “I’m very comfortable with the word ‘revolution,’” she tells Kolbert. “In my experience, revolutions have been very positive.”

Bill McKibben, meanwhile, earlier this summer hailed Pope Francis’s Laudato si’, not least for the fact that “simply by writing it, the pope—the single most prominent person on the planet, and of all celebrities and leaders the most skilled at using gesture to communicate—has managed to get across the crucial point” that climate change is the most pressing issue of the day.

He further admits to “great relief” after reading “this remarkable document”:

I’ve been working on climate change for a quarter century, and for much of that time it felt like enduring one of those nightmarish dreams where no one can hear your warnings. In recent years a broad-based movement has arisen to take up the challenge, but this marks the first time that a person of great authority in our global culture has fully recognized the scale and depth of our crisis, and the consequent necessary rethinking of what it means to be human.

To what degree individual efforts can spur change among humanity’s massive collective may be less the point, then, than whether something like critical mass can make that collective budge. McKibben more recently reports on the release of the Islamic Declaration on Climate Change, a document issued from a convocation of about sixty Muslim clerics and religious scholars August 19. Though it’s shorter than Francis’s encyclical, he writes, it “arrives much in the same spirit,” and what’s more, it makes direct recommendations on specific policy. The most notable: Complete divestment from fossil fuels, which puts the group on the same page as Church of England, the Unitarians, the United Church of Christ, and the World Council of Churches. McKibben says that’s not as farfetched as it once might have been; the price of solar energy is plummeting, and if there’s anything oil-producing countries of the Middle East may possess more of than fossil fuel deposits, it’s sunlight.

Yet most important, in McKibben’s view, is the very fact of documents like Laudato si’ and the Islamic Declaration on Climate Change:

[W]hat they signal is an ongoing shift in the zeitgeist, to the point where most thinking people in our civilization realize that we have to take dramatic, even “radical,” action to blunt an emerging crisis. This is new. Ten or twenty years ago there was no significant religious environmental movement. Conservative religious leaders viewed concern about the environment as pagan, and liberal ones saw it as secondary to the battles against their traditional foes: hunger, poverty, war….

The real effect of documents like these … is less immediate policy shifts than a change in the emotional climate. Most of us identify with one or several groups—Islam or Christendom, our alma mater or our union. As these begin to emphasize an issue, it becomes easier to make it part of our mental furniture. … It’s not necessarily that we take what the pope says as Gospel, or decide that because our university sold its fossil fuel stocks we will do likewise; it’s that these things normalize action, moving it from the category of “something that activists want” to “something obvious.” That’s the phase we’re reaching right now in the climate fight.

Some might be reminded of the movement for legalization of same-sex marriage, where such “normalizing of action” brought about cascading shifts in fairly short order. Can something similar be expected on climate change, which merited not a single mention in August’s Fox GOP presidential debate? While the Obama administration’s recently proposed regulations on coal-burning power plants are being challenged by the industry and its allies in Congress, as well as by more than a dozen states, the American west is on track for its driest year on record. A new report from the Intergovernmental Panel on Climate Change says that higher temperatures could make life in the developing cities of Africa unendurable, while reducing the length of the growing season across parts of the continent by 20 percent. One can only hope—but one also must, as opposed to the alternative.