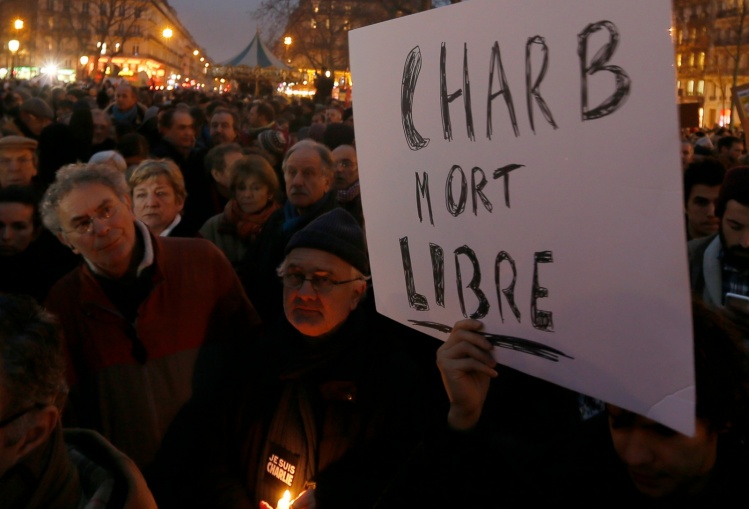 In response to the events of September 11, 2001, the French newspaper Le Monde famously ran a headline declaring, “Nous sommes tous Américains” (We are all Americans). After the January 7 attack on the offices of the weekly satirical newspaper Charlie Hebdo, a parallel expression of solidarity soon began appearing on banners, public monuments, and social media: “Je suis Charlie.” Never mind that many of those who repeated these words—including many Americans—had never seen the publication, and would likely find it offensive if they did. Even if the slogan seemed a little too easy, the solidarity was genuine. In targeting Charlie Hebdo for having published irreverent cartoons of the Prophet Mohammed, the terrorists, Cherif and Saïd Kouachi, not only attacked a legendary journalistic institution, well known in France if not elsewhere; they also attacked a principle central to all liberal democracies: the freedom to speak one’s mind, to write and, in this case, draw freely, without fear of being either locked up or gunned down.

As the theologian William T. Cavanaugh points out in this recently featured piece, not all victims of terrorism are heroes, and there’s nothing especially heroic in giving offense just for the fun of it, even if, like Charlie Hebdo, one does so indiscriminately. But whether one finds the publication’s special brand of lewd iconoclasm funny or blasphemous or both—à chacun son gout—one can admire its staff for their willingness to go on doing what they knew might get them killed, for refusing to let zealots armed with Kalashnikovs determine the boundaries of permissible discourse. Ross Douthat of the New York Times put it well when, after conceding that “a society’s liberty is not proportional to the quantity of blasphemy it produces,” he went on, “If publishing something might get you slaughtered and you publish it anyway, by definition you are striking a blow for freedom, and that’s precisely the context when you need your fellow citizens to set aside their squeamishness and rise to your defense.”

Not everyone has been ready to do so. One of the least edifying responses to the carnage came from the Catholic League’s William A. Donohue, who suggested, before the blood was dry, that the editor of Charlie Hebdo had been partly responsible for his own death, and that it was not courage but narcissism that led him and his colleagues to persevere, even after their office was firebombed in 2011. These comments were, even by Donohue’s standards, remarkably obtuse. Then again, if you make a comfortable living stoking sectarian resentments, what do you say about a story like this one?

Some worry that the French will overreact to the coordinated attacks on Charlie Hebdo and a kosher grocery store, which together left seventeen people dead in addition to the three terrorists. In the following week, there were at least sixty threats and attacks directed at Muslims in France. As it cracks down on domestic terrorist networks, the French government will also have to protect and reassure its Muslim population, most of whom were appalled by the violence committed in the name of their religion.

Some worry that France’s allies, including the United States, will also overreact—or react in the wrong way, by succumbing to the kind of hysteria that allows unscrupulous politicians to draw their countries into unnecessary wars. Within days of the attacks, prominent Republicans in Washington were lining up to tell the media how this just goes to show what they’ve been saying all along: that we need to return to Bush-era interrogation and detention policies (Sen. Lindsey Graham); that President Obama is allowing ISIS to thrive (Sen. John McCain); that the president has lulled Americans into a false sense of security (Sens. Susan Collins and Marco Rubio). Both the timing and the content of these remarks were opportunistic. It may be too soon to say what the events of January 7 portend for Europe and the United States, but it is already much too late to try to vindicate the previous administration’s disastrous response to 9/11.

That said, there is also a risk of underreacting to this latest outbreak of violence, by treating it as if it were an isolated event rather than part of a much larger pattern. A few weeks earlier, twenty-three people were injured in Nantes and Dijon when two “lone wolf” terrorists drove their vehicles into crowds of Christmas shoppers. Around the same time, an Islamicist took eighteen hostages in a Sydney café; two of them were killed. Two months before that, a down-at-heels Muslim convert killed a Canadian reservist at the National War Memorial in Ottawa. The list goes on. Some of these attacks may have been planned and funded by terrorist organizations in the Middle East; others appear to have been alarmingly spontaneous. But they were all inspired by the same poisonous ideology, which turns alienated and insecure young people into suicidal jihadists. It is no good pretending this ideology will disappear or cease to afflict us if only the Charlie Hebdos of the world can be persuaded to exercise a little more tact and self-restraint. The groups behind these attacks are demanding vengeance or submission, not better manners.