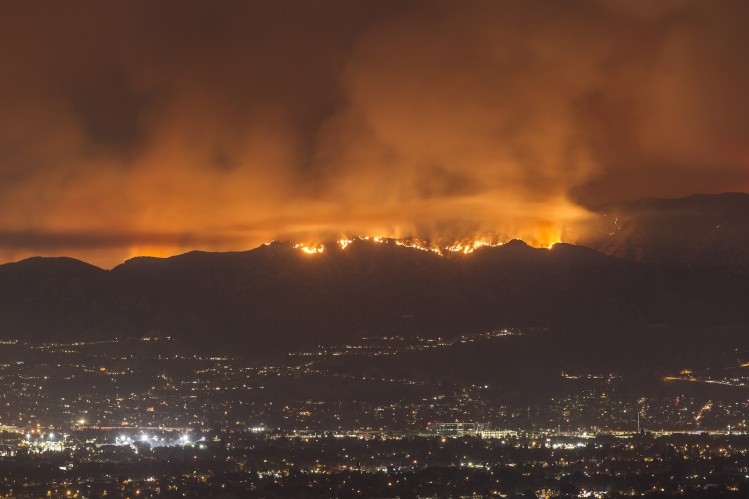 Anyone who has ever watched the annual Tournament of Roses Parade on New Year’s Day, the parade that precedes the Rose Bowl, may have seen the (occasionally) snow-capped San Gabriel Mountains towering in the background. Pasadena, California, where the parade takes place, abuts Los Angeles on the northeast, in the foothills at the western end of the San Gabriel range.

Angelenos have long called the hot winds blowing across the Santa Ann River from the inland deserts the “Santa Anas.” Usually, of course, the prevailing winds are the moistening westerlies rolling in off the Pacific Ocean. But when the direction reverses, Southern California’s coastal counties, already arid, can become desert-dry in a day or two, and the fire hazard can grow extreme.

Until now, the usual Santa Ana wind event has lasted only two or three days. But climate scientists have been warning us that once rare and extreme events like the Santa Ana winds are about to become both more extreme and less rare. 2017—and not in Southern California alone—was a year in which those predictions became frightening actuality. As I write at the turn of the year, the Santa Anas have been blowing on and off since December 4, and there is no guarantee that the current lull will not be followed by another flare-up. When the fires first broke out, Southern California was already exceptionally warm and exceptionally dry. On October 24, Dodger Stadium hosted the hottest World Series game ever held: 103 degrees. November 23 broke the all-time Los Angeles Thanksgiving Day heat record: 92 degrees.

Fire has, of course, been a perennial danger in parched Southern California. But protracted drought—with shortened winters and worsened beetle infestation—has brought about the death-in-place of an estimated 29 million trees on California’s mountains: fuel just waiting for the kindling spark. And when they go, those trees take with them California’s most important carbon sink.

We have some serious plans in place against the possibility that we, too, both in our seventies, might be completely wiped out.
sharetweet

A few years ago, I attended a think-tank briefing by the retired CEO of a major utility and a retired speaker of the California state assembly. Those dead trees, they pointed out, are the result of past, not future, climate change. Until now, western firefighters have fought wildfires by rushing reinforcements from adjacent and even remote regions to the site of a conflagration. But as the frequency and intensity of fires grow, they predicted, this tactic will prove increasingly unequal to the threat, and parts of California, as a result, will become effectively uninhabitable.

My wife and I have evacuated once since the Santa Ana winds started blowing, fleeing the little-publicized Canyon 2 Fire in November, which took a dozen homes or so in eastern Anaheim. (We live in the nearby town of Santa Ana.) Having been put on evacuation alert a second time, we are accustoming ourselves to the idea that another alert, or another evacuation order, may come at any time. We have some serious plans in place against the possibility that we, too, both in our seventies, might be completely wiped out. Unlikely, I want to believe, but just how unlikely, we must wait to learn. A year ago a blowing ember from an electrical fire set our backyard on fire. By sheer coincidence, Southern California Edison sent an inspector this very morning to check trees and power lines on our property and adjacent ones.

An iconic Los Angeles oil painting now hanging in the Hirschhorn Museum in Washington, D.C., is Ed Ruscha’s The Los Angeles County Museum on Fire, 1965-1968. The story behind that painting has nothing to do with any real fire danger to LACMA, which is in about as fire-safe a location as Los Angeles offers. The painting comes to mind, however, because of the adjective common to most eyewitness accounts of December’s Thomas Fire, which threatened a huge swath of Southern California from Ventura northwest to Santa Barbara: “apocalyptic.” As the Canyon 2 Fire burned west past our neighborhood and into Anaheim, I found myself imagining another iconic Ruscha: Disneyland on Fire 2017. Sleeping Beauty’s Castle in flames: does it not seem like the burning of Valhalla in a latter-day climate-change Götterdämmerung? A joke, but gallows humor for me. Fiscally, the low point in my life came in the 1975-1976 academic year when every dollar I spent put me a dollar deeper in debt. In retrospect, I think of that year as the deepest spiritual experience of my life, the year when I learned, to quote Hebrews 13:14, that “we have here no lasting city.” Like so many of my fellow Californians this fire season, will I have to learn that lesson again?