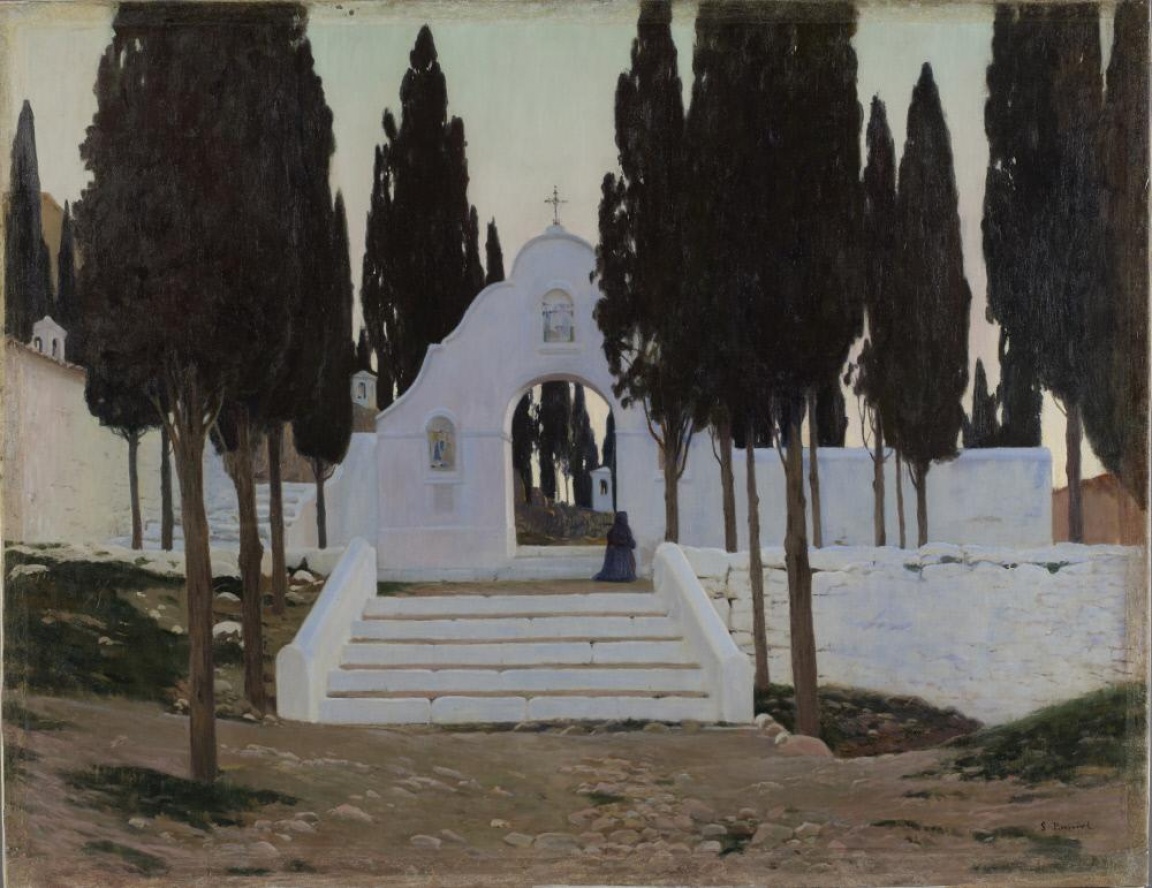 The first time I visited the Hispanic Society Museum and Library was in the late 1970s. I was an art student interested in the paintings of Joaquín Sorolla, and the museum was the only place to see his pictures in the New York area. I encountered a Beaux-Arts building with marvelous works, a couple of guards, and no other visitors. The place felt completely disconnected from its neighborhood in Washington Heights, where it sat prominently at the intersection of 155th Street and Broadway.

This was not my experience during a recent visit earlier this spring. This time, I was there to see Nuestra Casa, an exhibition of selected works from the permanent collection organized by guest curator Madeleine Haddon. The newly renovated East Gallery was bustling with visitors. Founded in 1904 by Hispanophile Archer Milton Huntington (1870–1955), the Hispanic Society boasts a collection of over 750,000 objects representing the art, literature, and history of Spanish- and Portuguese-speaking cultures throughout the world.

The institution was the first, during the early decades of the twentieth century, to introduce the work of important Spanish painters (such as Sorolla and Ignacio Zuloaga) to American audiences. By the 1960s, however, the Hispanic Society had lost touch with its surrounding Latino/a community (mostly from the Dominican Republic and Puerto Rico). That changed in the 1990s, when the museum began to expand its Latin American collections. Since then, it has been making a serious effort to connect with and serve its local communities, in part by integrating a revised, more critical art history into its exhibitions—one that questions hierarchies and presents the complex heritage of the cultures without ignoring the brutality of colonization and the slave trade. Nuestra Casa does just that, thoughtfully bringing together the museum’s best-known works with less familiar (but no less extraordinary) canvases and artifacts.

The new East Gallery is a gray, open space featuring nineteen paintings and ten display cases holding books, fabrics, and other artifacts. There’s plenty of room to examine each object closely, and on its own terms. Diego Velázquez’s Portrait of a Little Girl (1640) hangs next to José Agustín Arrieta’s The Young Man from the Coast (ca. 1843–1850), a juxtaposition that sets the tone for the entire exhibition. Without a doubt Spain’s greatest Baroque painter, Velázquez depicts a dark-haired little girl in this small, unfinished canvas. Her solemn and beautiful face is rendered with freshness, simplicity, and economy. (Scholars suggest she may have been the artist’s granddaughter, but her identity remains a mystery.) The corresponding portrait by Arrieta represents a young man of African descent from the coastal region of Veracruz in Arrieta’s native Mexico. Dressed in a white shirt and overalls, he holds a basket of tropical fruits from the region—a perfect excuse for the artist to introduce bright colors and variegated forms. The young man looks straight at the viewer with a slight smile on his lips, as he offers us mango, mamey, pineapple, and other produce. He’s a dignified person, worthy of our respect.

In and around the cases are objects that reflect multicultural, pre-1492 Spain. There’s a beautiful porcelain tile with a Star of David from a Toledo synagogue and an exquisite Alhambra silk from Granada. An iron door knocker featuring the head of an African man from the sixteenth century reminds us of the horror of slavery and reveals the racist parallels that Spanish artisans and consumers frequently made between Africans and animals, other common subjects for this type of object. A group of six watercolors by the Afro-Peruvian artist Pancho Fierro (1807–1879) offers charming examples of genre subjects, from bullfighting to a water seller to indigenous and Afro-Hispanic women. In addition to portraits, Fierro painted murals and shop signs; but it’s in his watercolors and prints that he most forcefully conveys the vivacity of Lima’s diverse inhabitants.

The show doesn’t shy away from direct engagement with colonialism. Case in point: the work of Puerto Rico’s leading colonial painter, the mestizo José Campeche (1751–1809), who skillfully adapted the Spanish Rococo style for the Americas. His small, jewel-like portrait of Doña María Catalina de Urrutia is filled with delicate details capturing her dress, hat, and jewels. Similarly, Mexican Juan Rodríguez Juárez’s casta painting Mestizo and Indian Produce Coyote (c. 1715) depicts a family and classifies the racial mixtures prevalent there—the child’s animal name, Coyote, says it all. But it’s not so simple. Paradoxically, works like this both controlled and regulated images of race in the New World, documenting the existence of interracial unions acceptable in Latin America, but not in Spain. 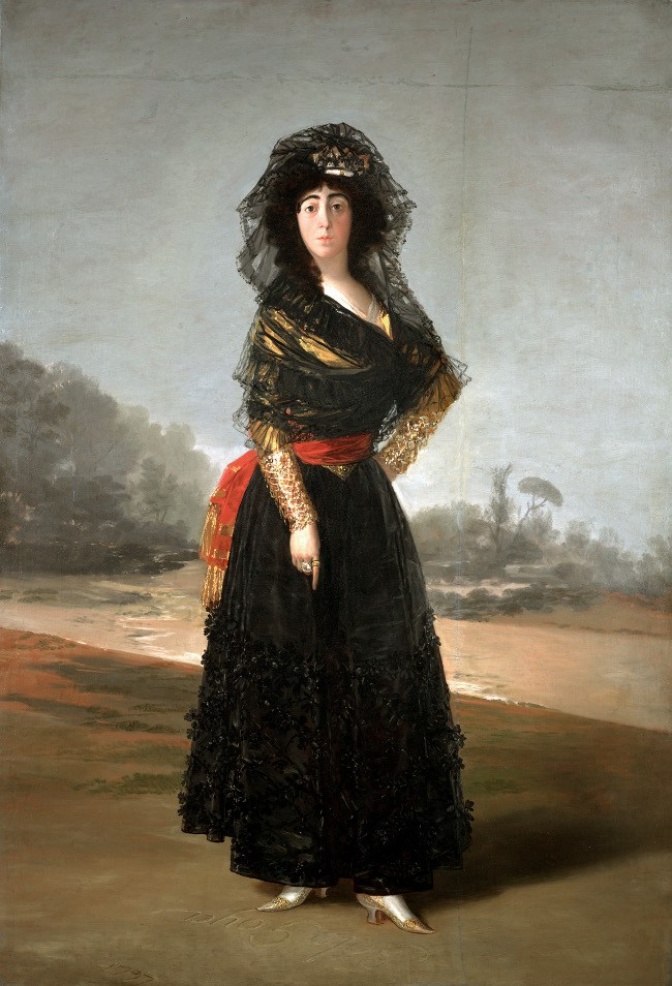 There’s also a large number of standout paintings, including canvases by Sorolla, Francisco Goya, Santiago Rusiñol, Ramón Casas, Hermen Anglada Camarasa, and Miguel Viladrich Vilá. One of Goya’s major portraits (and one of the jewels of the collection) is The Duchess of Alba (1797). Dressed in the popular style of a maja (a working-class woman from Madrid), the duchess wears a black lace-trimmed skirt and an embroidered yellow blouse; her grandfather’s red military scarf is tied around her waist while a transparent black mantilla covers her head and shoulders. She stands in front of a river at her estate and points to the ground, where “Solo Goya” (Only Goya) appears written in the sand. Here Goya fuses painterly elegance with an earthy sensuality; it is possible that the artist could have had an affair with his subject, but we will never know. At the time the duchess was mourning her dead husband, and the two rings she wears—one inscribed “Alba,” the other “Goya”—may simply reflect the artist’s fantasy. Goya kept the portrait in his studio long after the sitter’s death.

Both Santiago Rusiñol and Ramón Casas were leading Catalonian painters associated with the cultural golden age of Barcelona in the late nineteenth and early twentieth centuries. Dynamic draftsmen, their visual languages were grounded in realism, while absorbing both Tonalist and Impressionist elements. Rusiñol’s Calvario at Sagunto, Day’s End, is one of a series of landscapes of calvarios (religious places dedicated to the fourteen Stations of the Cross, for processions during Holy Week and throughout the year) that he started in 1901. Painted with fluid brushwork in whites, yellows, ochres, and olive green, this calvario is set on a hill overlooking a city north of Valencia. Rusiñol endows the building and surrounding cypress trees with a spiritual quality that evokes meditation. Casas’s La Santera depicts a woman collecting alms in a dark church interior, apparently a beggar. Research and closer examination prove otherwise. Not only is the model the mother of a distinguished Barcelona ceramicist, but she is also well dressed and wears fine earrings and an antique brooch. A monumental figure, she glances straight at the viewer while holding a collection plate and a basket for food donations.

Sorolla’s After the Bath, in contrast, is a painting filled with light and color. Here a fisherman holds up the bath sheet for a young woman who has come up from the surf. The painter’s brush hints at the folds of her robe clinging to her body. An orchestration of blues, yellows, and pinks fills the surface of the canvas as sunlight cascades over both figures. Nearby, Anglada Camarasa’s Girls of Burriana represents three young women and their highly bedecked horse awaiting the beginning of a procession that celebrates spring and commemorates St. Joseph (a Valencian tradition that takes place in March). Thickly painted with a decorative quality, it exudes joy through its dense application of colors, reflecting the influence of Art Nouveau and the Austrian painter Gustav Klimt.

My visit concluded with a long look at two magnificent 1920s portraits, The Woman from Montevideo and The Man from Montevideo, both by Miguel Viladrich Vilá (1887–1956). Though a native Catalonian, he moved to South America by 1919 and spent the rest of his life traveling between Argentina and Uruguay. Painted with a sharpness and precision that evoke Renaissance works as well as the contemporary German New Objectivity, his work depicts Afro-Uruguayans. The woman sits sideways against a bright purple wall inside a room; through an open window we see a sunny courtyard, two other buildings, and a bit of sky. The composition is rich with detail: a potted plant; a dish with cauliflower, oranges, and apples; a blanket of multihued, geometric patterns that the woman grips with her left hand. In her right hand she holds a gourd with a straw, presumably filled with yerba maté. Calm and powerful, wearing a light-colored blouse that contrasts with her dark skirt, she stares out almost in defiance. Viladrich’s slightly smaller pendant portrait of a man places him outdoors against a landscape of greens and gray-brown trees. Looking sideways off in the distance, his face is charged with melancholy. He wears a red poncho, and carefully holds a small, white dog at his side. Little is known of the sitters of these two portraits; yet Viladrich has captured the individual character of their persons through the clarity of the drawing, richness of color, and specificity of place.

Nuestra Casa—which means “our house”—is indeed a “rediscovery” of treasures that reflect the rich and complicated cultures of Spain and Latin America. This specific presentation, which concludes in mid-April, doesn’t just leave us hungry for more. It portends a bright, increasingly relevant future for the Hispanic Society Museum and Library, whose masterpieces, one hopes, will soon be rediscovered by new generations.