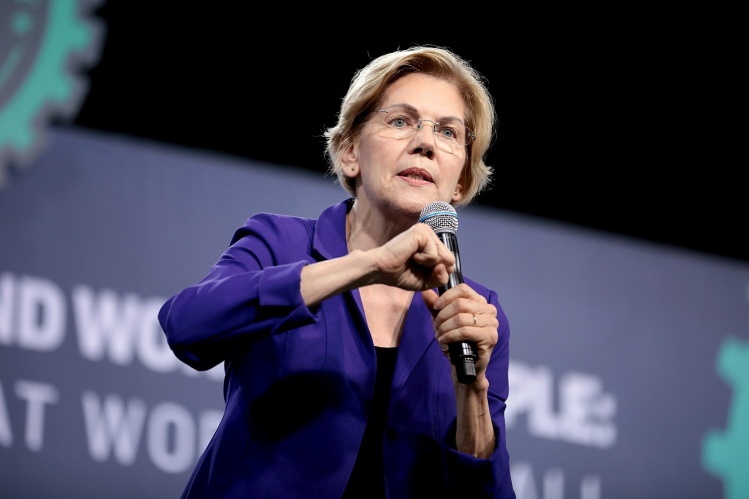 Do you build the economy from the top down or from the bottom up? And is the main purpose of the economy the production of things or the enhancement of life?

I can imagine immediate objections to both questions. Don’t all successful economies involve bottom-up and top-down elements? Doesn’t everybody claim to be a bottom-up person at heart? And don’t “things” (such as the laptop I am writing on) enhance “life”?

Well, sure. Almost all questions involving binary choices are flawed in some way. But these two concerns underlie the sometimes explicit, often subterranean, debates going on in the country—and, especially, in the campaign for the Democratic presidential nomination.

Massachusetts senator Elizabeth Warren has been rising in the polls because of the sheer, impressive bulk of her policy proposals, but also because she is pressing the issue of what it takes to build a moral economy.

The vision of a lower-tax, lightly regulated economy, which gained ascendancy during the Reagan years, was always defended by its advocates as a bottom-up idea because it extolled the role of the entrepreneur who bravely started a business. If he or she worked hard enough and had something worthy to sell, the business would take off, creating jobs and new opportunities. It’s why Republican politicians argue obsessively that what’s good for “job creators” is good for the rest of us.

But this conception of economic life is not really bottom-up. It has little concern about concentrated economic power. Its policies reward those at the top. That’s where the term “trickle down” comes from. Investors and business people are the heroes of this story. The worker owes everything to them.

This view of the economy has gone in and out of style. It loomed large in the 1920s but was badly discredited by the Great Depression of the 1930s. It won a new lease on life in the Reagan years but began coming into question with the ensuing surge of inequality. It lost its hold entirely after the crash of 2008.

We thus live in a time when one narrative is dead but the new one is yet to be written. We’re on “one of those blank pages in between chapters,” as Pete Buttigieg put it when formally announcing his presidential campaign.

No one is doing more than Warren to fill in those blanks. Put all her ideas together and you find two core themes. One is that, contrary to myth, government is always shaping the economy, both by what it does and what it chooses not to do. The issue is: Whose side should government be on? Whose interests should it serve?

This leads to her other core principle: that the economy starts not with the investor, but with the worker, who had a starring role in the New Deal era spanning the 1930s to the 1970s. Enhancing blue-collar purchasing power was the way we drove prosperity. Bernie Sanders’ speech last week defining democratic socialism highlighted not foreign models but the need to “take up the unfinished business of the New Deal and carry it to completion.” In defending a very similar objective, Warren proposes capitalism of a bottom-up sort with antitrust policies aimed at making the economy more competitive by busting up economic behemoths.

Every one of her many plans has come under criticism from one direction or another, but that’s what happens when you’re very specific. Her achievement is that she has laid the groundwork for the debate the country must have about what the next economy should look like.

Joe Biden, for one, is hearing the music. It was striking that during his visit to Ottumwa, Iowa, last week, he criticized the legendary conservative economist Milton Friedman, challenging the idea that “the only obligation corporations have is to stockholders.” Why are investors seen as “the only job creators”? Of workers, he asked: “Aren’t they creating jobs?”

Next week, Democrats will have their first debate, a sprawling two-day affair. To rein in the chaos, the moderators might consider having the candidates focus on specifics as to what it would take to build a system that does reward work. Let’s hear them talk about how we might organize our economy so it enhances rather than disrupts our families and communities. Yes, productivity and growth matter. Our everyday lives matter, too.

We don’t usually think of the word “moral” as attached to the word “economics.” It’s time we started.

Will We Forget the Miners Again?