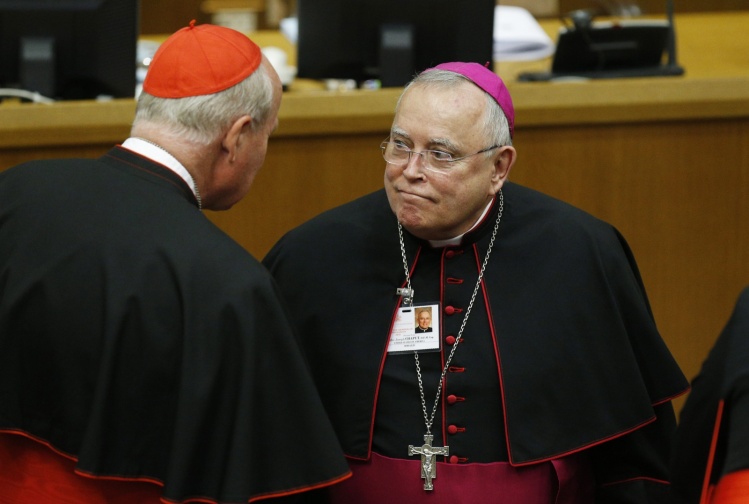 Archbishop Charles J. Chaput of Philadelphia talks with Cardinal Christoph Schonborn of Vienna before the opening session of the Synod of Bishops on young people, the faith and vocational discernment at the Vatican. (CNS photo/Paul Haring)

In October, a South Carolina priest refused to give Communion to Democratic presidential candidate Joseph Biden because he supports legalized abortion. Then at their November meeting, the U.S. Conference of Catholic Bishops voted to label abortion the “preeminent” moral issue in their “Faithful Citizenship” guide to voting, ignoring the eloquent objections to that language from bishops appointed by Pope Francis. These events prompted several observers to wonder: Are the culture wars back?

Before answering this question, we need to answer a prior one: What exactly is a “culture warrior”?

In my view, the label does not point to a particular person, or a particular cause, but rather to a particular rhetorical style. The people we call “culture warriors” consistently position themselves as moral prosecutors. Echoing the fiery language of Hosea and Jeremiah, they call out political and moral opponents, whom they put on trial for violating the fundamental moral law. Like actual prosecutors, they don’t want to hear excuses or counterarguments. They want the targets of their denunciation to plead guilty, do their time, and amend their ways. They are full of anger, which they stoke rather than control, because they believe their anger is righteous.

A dialogical approach facilitates and channels argument. In contrast, a culture-war approach shuts it down.
sharetweet

We find culture warriors across the political and religious spectrum. The preeminent Catholic conservative culture warrior, of course, is the Archbishop of Philadelphia, Charles Chaput, OFM Cap. He has relentlessly castigated not only pro-choice politicians, but also ordinary Catholics who judge it best to vote for pro-choice politicians on other grounds—such as their support for universal health care or desire to strengthen unions. But Chaput’s rhetorical style is not foreign to those on the left. Think of teenage climate-change activist Greta Thunberg, who angrily indicted world leaders at the 2019 U.N. climate-action summit: “We are in the beginning of a mass extinction and all you can talk about is money and fairy tales of eternal economic growth—how dare you!”

It’s not the issue that makes a culture warrior, it’s the rhetoric. In fact, there are a growing number of Catholic “whole Catechism” culture warriors. Because they defend both the unborn and the refugee, and condemn both euthanasia and climate change, they see themselves as a bridge between left and right. But their use of prophetic indictment means they are more likely to be an isolated island of righteousness, congratulating themselves for their commitment to the full spectrum of Catholic moral teaching. For everyone else, the bridge they build is booby-trapped.

Real bridge-building requires a fundamental shift in rhetorical approach, not merely talking about a broader range of moral issues. Rather than demanding conformity, a dialogical approach facilitates mutual exchange, nurturing the possibility of good-faith discussion in three ways. First, it pinpoints and contextualizes differences. A person who honestly does not think that human activity is causing climate change may be wrong about the facts. But that does not mean she is a monster simply unconcerned about the fate of the planet. Second, it recognizes that different people may prioritize different mediating principles. Not everyone who opposes a generous immigration policy opposes welcoming the stranger; some may prioritize taking care of the poor and vulnerable already in our midst. Third, it appreciates the complexities of role-related obligations in a pluralistic society. A psychiatrist or a priest who does not inform a patient’s husband about her scheduled abortion is honoring a professional duty of confidentiality—he is not a pro-abortion stooge. And a lawmaker like Biden—one with deep moral reservations about abortion—may nevertheless judge that advocating a law criminalizing the procedure is inconsistent with his obligations as a public servant in a highly divided society.

We can argue about facts, we can argue about priorities, and we can argue about the nature and scope of role-related obligations. And that’s the point. A dialogical approach facilitates and channels argument. In contrast, a culture-war approach shuts it down. As I argued in my 2016 book Prophecy without Contempt, people tend to resent others who try to dominate them by assuming the role of moral prosecutor. They don’t like being denounced as minions of the culture of death. As Francis X. Maier recently wrote in First Things, “Contempt for people who offer their questions and criticisms out of principle, even if they’re mistaken or needlessly harsh, has the opposite of the desired effect. It stiffens resistance and proves the need for more of it. Name-calling is a bad way of winning over the alienated.”

Of course, it’s always easier to dish out contempt than to take it. Maier’s basic point is much easier to appreciate if one has been the target of scorn. I can’t help wondering: What would have happened if Maier had learned those lessons twenty years ago? As Archbishop Chaput’s close advisor and speechwriter, he might have been able to help us avoid some of the bitterness and alienation that plague American Catholicism—bitterness and alienation that have been provoked in no small part by his own rhetorical choices and those of his boss.