Brexit from the Bottom Up 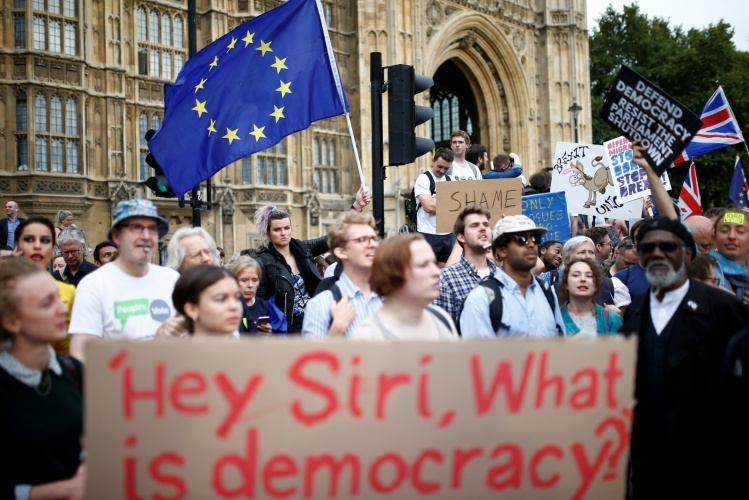 Brexit protesters hold placards and a flag of the European Union outside the Houses of Parliament in London Aug. 28, 2019. (CNS photo/Henry Nicholls, Reuters)

On a blustery October Saturday twelve days before the United Kingdom was set to leave the European Union, over a million people gathered in London for the People’s Vote March. It was one of the largest demonstrations in the city’s history, organized by a campaign of the same name. People bussed in from around the country, trains into King’s Cross station were packed, and the Tube, London’s normally orderly and calm underground transit system, overflowed with Brits eager to show their opposition to Brexit.

I boarded a morning train from Cambridge and transferred to the Victoria Line at Liverpool Street, sandwiched between two elderly women with neon-dyed hair. Marchers met at noon in the city center, between Hyde Park and Marble Arch, and London Mayor Sadiq Khan led the masses to Parliament, where a host of activists and politicians gave speeches. The streets were filled with EU flags and posters; people wore shirts reading “Bollocks to Brexit!”

Fellow marchers were friendly and polite; the vast majority were middle-aged, with many slightly older. Twenty-somethings and college students were hard to find, but there were plenty of families with young children. Most of the marchers seemed to be upper-middle class; I overheard conversations on new art exhibits, visits to the theater, autumn weekend trips. Ethnically, the group was homogeneous. A woman who declared herself “an anti-racist” was met with loud cheers by an almost entirely white crowd.

Still, I was inspired by my fellow marchers’ excitement and zeal; spirits didn’t dampen even when a cold rain began to fall. A couple of hours in, it was learned that in an emergency session of Parliament, a deal Boris Johnson proposed for leaving the European Union had been voted down. The crowd went wild.

Marchers were nominally demanding their right to have a say on Brexit, but the protest became an amalgam of political grievance: against Boris Johnson, Donald Trump, and anti-immigrant policies; for more democratic participation in government (as one banner declared, “It’s not democracy if we’re not allowed to change our minds”). There were lively drum lines, people singing, even a “Rave Against Brexit,” where a DJ spun techno for a spirited, dancing group. Posters ranged from somewhat terrifying—full-body cut-outs of Donald Trump and Boris Johnson—to humorous: “This is like when Geri Halliwell overestimated her career as a solo artist and left the Spice Girls.” A man apparently unversed in history emphatically waved a black-and-white sign reading “Europe Means Peace.” Meanwhile, a woman not more than a few years older than me laughed and asked the man next to her, “Has anyone actually figured out what Brexit is?”

The march exemplified the virtue signaling of the bourgeoisie, but what’s really needed is working-class solidarity.
sharetweet

It’s sometimes hard to believe that the Brexit referendum was held in 2016, four-and-a-half months before Trump’s election. Three Brexit deadlines have come and gone. Boris Johnson repeatedly declared that Britain would leave the EU—with or without a deal—on October 31, and the government launched a £100 million ad campaign to inform UK residents accordingly. But the deadline has been pushed back yet again, now to January 31, 2020.

My perception of Brexit changed significantly within a few weeks of moving to the UK. While in the States, I opposed Brexit, since the vote to leave the EU seemed motivated by the same right-wing populist currents that put Trump in office. But in reality, the issue is divisive along both progressive and conservative lines. This will come to a head with special parliamentary elections set to take place on December 12. It’s the first time in a century that elections won’t be held in May or June, and the December date has raised concerns about curbing student participation, since universities will be on break. But Johnson needs to secure a stronger Conservative majority in order to actually pass a deal. Meanwhile, his opposition sees elections as a chance to kick the Tories out of power and to chart post-Brexit England forward on their own terms.

A recent Guardian poll suggests that the number of people who will base their vote on Brexit has more than doubled, from 18 percent in 2017 to 40 percent now. But as I witnessed during the march, it’s not the only issue on people’s minds. The future of the National Health Service (NHS) is also a matter of concern, as Conservatives want to privatize the service and Labour is in favor of expansion. Both parties are pledging new spending on various projects and plans. The Tories have promised to invest £100 billion in public infrastructure, to increase policing in England and Wales, and to increase spending on some schools and hospitals. Meanwhile, Labour rolled out a one-hundred-page manifesto articulating its priorities. It promises greater investment in schools and hospitals, as well as in housing; it’s promoting a £10 “living wage”; it has pledged £250 billion for a “green industrial revolution,” and it seeks to expand national care for young children and old people.

While the Tories plan to deliver Brexit on an EU-agreed deal, Labour suggests holding another referendum. The wildcard in the mix is the Liberal Democrats—“Lib-Dems”—largely regarded as a party ideologically focused on stopping Brexit at all costs and not much else. The squarely centrist party has long supported most of the Conservative government’s austerity policies (government spending cuts), and in this campaign has attacked Labour head Jeremy Corbyn more than the Tories. While the Conservatives currently hold 298 seats and Labour has 243, the Lib-Dems only have 20, but the party is launching a massive campaign to try to regain a legislative stronghold.

The Lib-Dems are attempting to capitalize on how Brexit has come to dominate the UK’s political discourse. Many Lib-Dem voters I spoke to while canvassing with the Cambridge Labour club are frustrated by Labour’s inability to take a firm stance against Brexit. There’s a faction on the left (“Lexiters”) that support leaving; they bemoan the flaws in the EU and believe that many liberals who oppose the movement are middle-class people who misunderstand what leaving the Union would actually entail. For instance, EU members enjoy “freedom of movement,” and in middle-class British culture, easy travel throughout Europe is considered something of a birthright. Many speakers at the October march voiced worries about losing “the right of our children to travel and study abroad,” the tradition under which young people tour the continent before heading to university. Yet as progressive critics of the European Union argue, freedom of movement isn’t all good. It’s actually large corporations that benefit the most: firms often move their production to states with fewer workplace protections, which allows them to exploit cheap labor and can lead to higher unemployment in countries with greater regulation.

If Brexit takes place, though, those most vulnerable will be the several million EU-born workers currently in the UK, whose right to work in the country will be challenged. Additionally, a recent announcement that the British government is planning to diverge from the European Union on labor regulation after Brexit has raised questions about workers’ rights and protections, though Boris Johnson has argued that Brussels-based regulation is ineffective. Criticisms of the European Union—its corporate protections, its privileging of the interests of certain member states, its restraints on public investment—are legitimate. But those leading the Brexit charge hardly seem concerned with the working classes.

If one element of the march was particularly impressive, it was the attempt at re-establishing unity. The emphasis was on not blaming those who voted for Brexit, and on urging those who did to reconsider those whom Brexit would actually affect. Several speakers declared: “There will be no losers except for Boris Johnson and his puppet government.” Union leaders condemned a broken economic system, urging marchers to “reject austerity policies in favor of an economy that serves people.” Some of the loudest cheers were heard after Alex Fernandes, a member of Labour for a Socialist Europe, said: “Brexit is not a working-class revolt. It is a far-right project that will grind the most vulnerable in our society to the ground.”

But is unity really possible? According to a recent poll, 57 percent of adults think it would have been better had the referendum never taken place. The haphazard vote held more than three years ago revealed fault lines that might not be so easy to repair. There are 326 seats needed for a parliamentary majority, and the Conservatives already have a significant lead while the anti-Tory vote is divided. In districts where the leading candidate is Conservative and the Labour candidate is close behind, any siphoning off of votes by the Lib-Dems will likely benefit the Tory, all but ensuring that Brexit is decided on Boris Johnson’s terms.

So there’s a certain irony in the largely white, upper-middle class supporters of the People’s Vote and the Lib-Dems, who are the most prominent voice in the movement, campaigning for Brits to unite against Brexit, when their campaign is weakening the strongest chance the nation has at actually doing so. The march exemplified the virtue signaling of the bourgeoisie, but what’s really needed is working-class solidarity, and only one party seems to prioritize it. As divisive as Brexit may be, treating the election as another referendum, at the expense of other pressing issues, stands only to widen those divisions. The rhetoric of unity may be critical, but even more necessary is a realistic approach to achieving it.